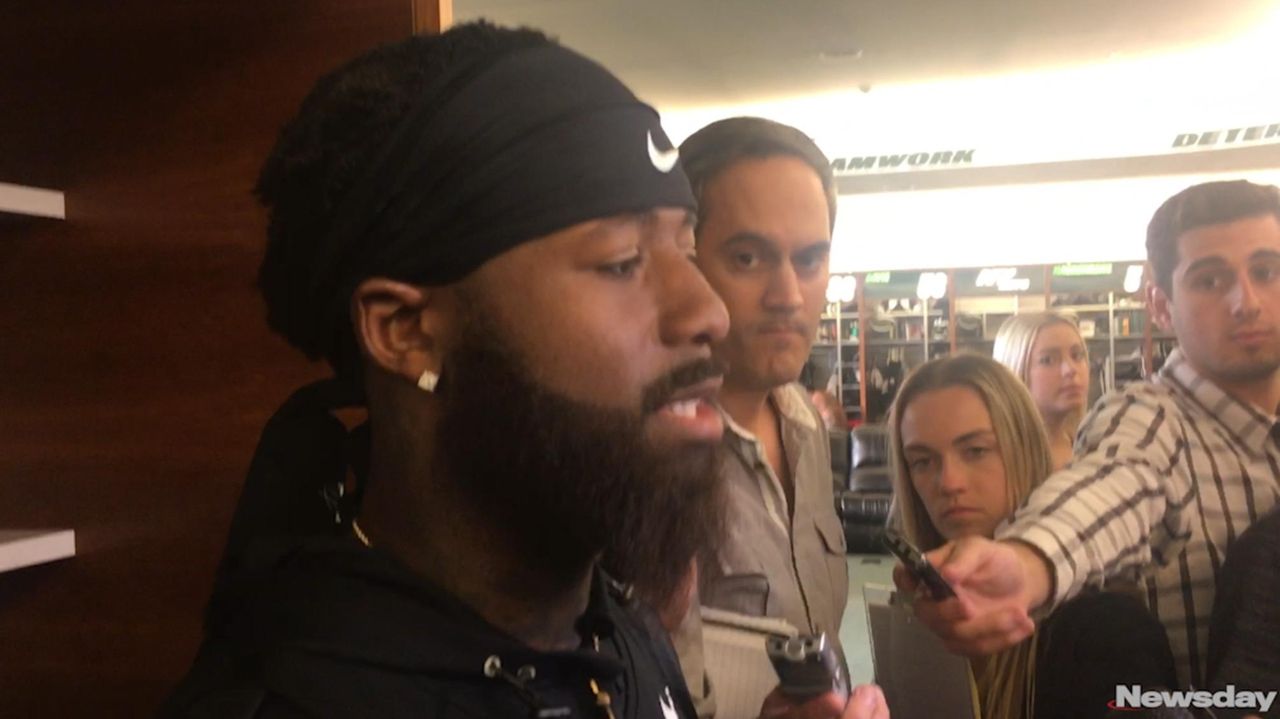 Jets wide receiver Jeremy Kerley is under review for a possible suspension by the NFL, according to a source. NFL spokesmen Brian McCarthy and Joe Lockhart declined to comment on Tuesday Oct. 31, 2017. Jets officials declined to comment as well. Credit: Newsday / Calvin Watkins

FLORHAM PARK, N.J. — On a peculiar Halloween afternoon, when Todd Bowles was told about a Jets trade during his news conference, wide receiver Jeremy Kerley said he expects to play against the Bills despite being under review for a possible suspension.

A source told Newsday that Kerley could be suspended for an undetermined violation of NFL rules.

Kerley would not get into specifics about the suspension and said his main focus is on Thursday night’s game. “It’s just a league matter right now,” he said after Tuesday’s practice. “I’m going to leave it up to the league.”

Kerley practiced the past two days with the issue hanging over him. He remains the lead punt returner and has worked in individual and team drills as the No. 3 wide receiver.

In a 20-minute span, Bowles was asked about Kerley’s possible suspension and referred reporters to the NFL. In a strange exchange, Bowles said the team wouldn’t make any trades before Tuesday’s 4 p.m. deadline, but less than five minutes later, a reporter told him the Jets had traded for 49ers cornerback Rashard Robinson. Bowles shrugged, and after the news conference said he didn’t know about the trade because he was on the practice field as it was being finalized.

Kerley addressed reporters later in the locker room and expressed confidence he will play. It is very rare for a player facing a suspension to discuss it with reporters. “Yeah, I expect to be out there,” he said.

This is Kerley’s second stint with the Jets. He was a 2011 fifth-round pick before he was released in 2016. He signed with the 49ers last season, leading them in catches (64) and yards (667), with three touchdowns. The 49ers released him, seeking younger talent. Kerley signed with the Jets Sept. 5 because he was a sure-handed punt returner and receiver, two needs because of the team’s inexperience at the positions.

In seven games, Kerley has 22 catches for 217 yards with one touchdown. He had an outstanding stretch in which he caught a pass on 19 consecutive targets, and he leads the NFL in reception percentage at 81.5 percent.

Kerley made a critical mistake in Sunday’s loss to the Falcons. With the Jets trailing 22-20, Kerley muffed a punt with 6:42 left in the fourth quarter. The Falcons recovered the ball and kicked a field goal.

Kerley said the ball was caught up in the wind and he misplayed it. That’s been his only mistake as a returner, and he has averaged 5.5 yards on 15 runbacks, with nine fair catches.

“It was very easy, it’s part of the game. Like I said, I’m a pro, I know how to handle myself,” Kerley said. “I ain’t worried about one play that’s going to lead into the next play, lead to the next play, I shut that off just as easily as it happened.”

If Kerley is gone, the Jets could have one of three rookies — ArDarius Stewart, Chad Hansen or Elijah McGuire — return punts.

Kerley is trying to minimize the potential distraction his suspension would cause.