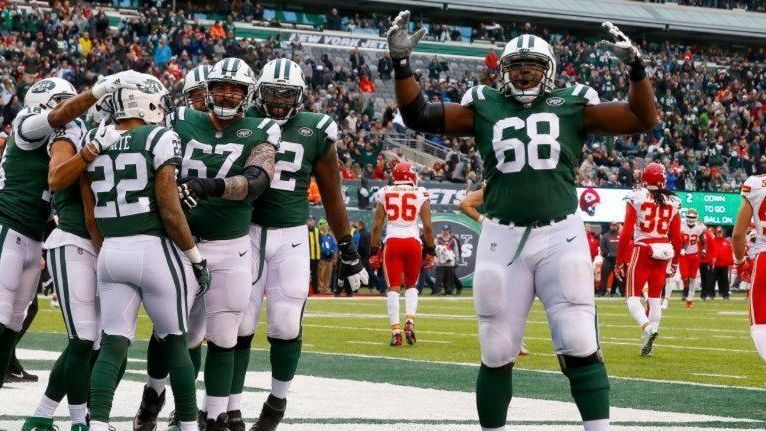 The Jets defeated the Chiefs, 38-31, at MetLife Stadium on Sunday, Dec. 2, 2017, ending their two-game losing streak and keeping their slim playoff hopes alive. Meanwhile, the AFC West-leading Chiefs, who started the season 5-0, have lost their last four games to sink to 6-6. Credit: Newsday / Calvin Watkins

The Jets worked on finishing their fourth quarters all week in practice, holding up four fingers or a fist as a signal it was time to close the game out.

At the start of the fourth quarter on Sunday at MetLife Stadium, several players held up four fingers.

Everything the Jets tried in practice worked in the game, a thrilling 38-31 win over the Chiefs that kept their slim playoff hopes alive.

“We needed that bad, man,” cornerback Morris Claiborne said. “We need to win every week, but coming off the previous weeks, we hadn’t been closing in the fourth quarter.”

The Jets (5-7) had lost five of their last six entering Sunday, making their playoff chances seem remote. They still believe they have a shot, though. “You’re supposed to be playing your best football in December,” running back Matt Forte said. “So hopefully this is an up trend for us.”

This was a game about finishing and coming back from adversity. The Jets fell behind 14-0 just 4:24 into the game as Alex Smith threw touchdown passes of 22 and 36 yards to talented tight end Travis Kelce. But Todd Bowles and his coaching staff kept the Jets from panicking.

The defense pressured Smith and took Kelce out of the game (after catching three passes for 90 yards in the first 4:24, he was held to one 4-yard reception the rest of the game).

The offense made the return of former Jet Darrelle Revis a non-factor as receivers Jermaine Kearse (nine catches for 157 yards) and Robby Anderson (eight for 107) had career highs in catches and the Jets converted a season-high 65 percent of their third downs (13-for-20).

“It’s big to win one,” Bowles said. “It gives you a lot of confidence. You can breathe a sigh of relief before you move on to next week. It’s refreshing to come out and finally win one of these.”

The Jets had lost three games in which they led in the fourth quarter, so when they went ahead 30-24 on a 38-yard field goal by Chandler Catanzaro with 11:23 left, it didn’t feel safe — and it shouldn’t have. On the ensuing possession, Tyreek Hill caught a 40-yard touchdown pass, beating the Jets’ zone coverage to give the Chiefs (6-6) a 31-30 lead.

But the grit that Kearse talked about that had been missing in the loss to the Panthers the previous week showed up. A 14-play, 75-yard drive took almost seven minutes off the clock as Josh McCown made plays and the Chiefs — not the Jets — committed critical mistakes down the stretch.

The drive almost ended when Catanzaro made a 21-yard field goal with four minutes left that would have given the Jets a 33-31 lead. But they took the points off the board when the Chiefs made a critical mistake: On the kick, nose tackle Bennie Logan hit long snapper Thomas Hennessy in the head and was flagged for unnecessary roughness.

The Jets got the ball at the 1 after the automatic first down. Then the Chiefs made another mistake on a third-down incompletion when cornerback Steven Nelson was penalized for holding tight end Austin Seferian-Jenkins in the end zone. Three plays later, McCown sneaked through a pile into the end zone with 2:15 remaining.

The Jets went for two and McCown threw incomplete, but Nelson again was called for holding. Kansas City’s Marcus Peters picked up the flag and threw it into the crowd, adding another penalty. The Jets made the Chiefs pay as Elijah McGuire ran for a two-point conversion and a 38-31 lead.

It still wasn’t over, as a 40-yard pass from Smith to Hill helped push the Chiefs to the Jets’ 19 with less than a minute to play. But Smith threw three incompletions, with his last throw landing next to no one, and the Jets ran out the clock.

“It was fun to be a part of today,” said McCown, who threw for 331 yards and had two rushing TDs. “These are the things that we’ve been chasing throughout the season, where we get in these fourth quarters. We’re playing good football and then we don’t finish the game. Todd throughout the week was adamant about just sending the message of just finishing.”

The Jets had a strong running attack (157 yards), an efficient game from McCown (26-for-36), a pressuring defense (two sacks, six quarterback hits) — and a solid fourth quarter.

“We’re still growing up and we’ll be growing up again next week,” Bowles said. “But for them not to flinch and come back from 14 down early and fight until the end is a credit to them.”