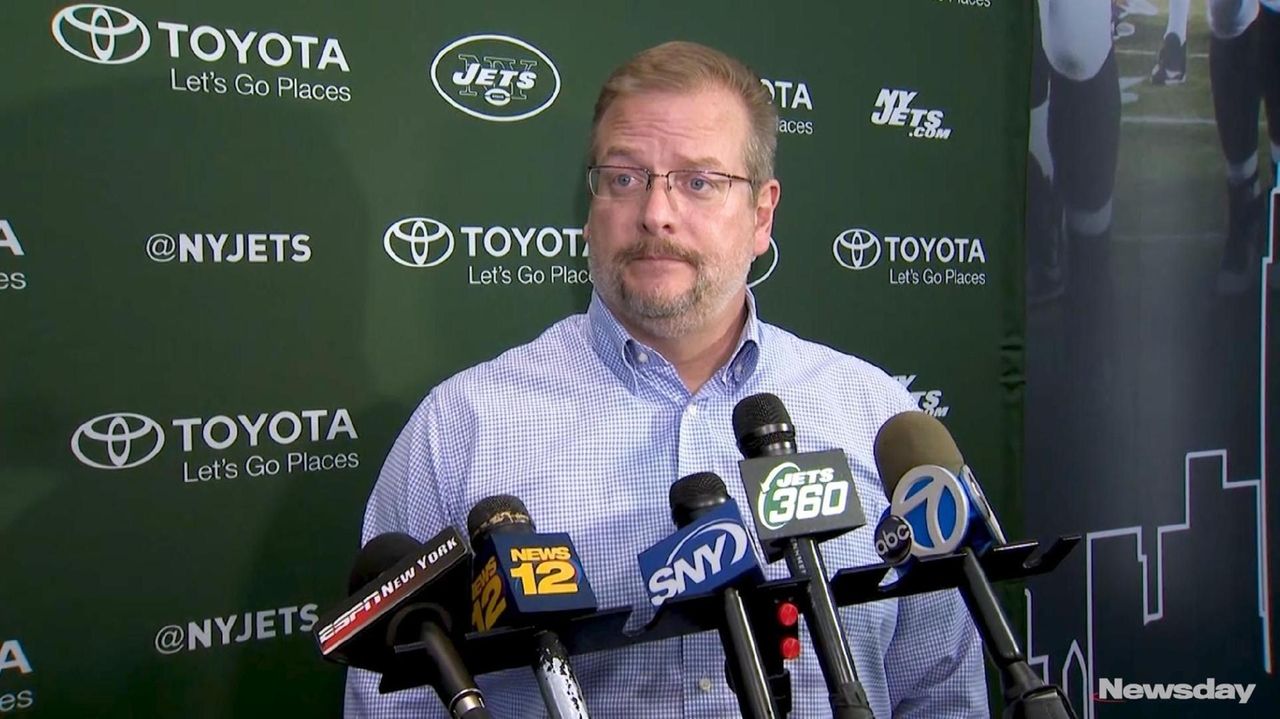 Jets general manager Mike Maccagnan said the franchise will be very active in free agency this spring during a news conference on Tuesday, Jan. 2, 2018. He also discussed the team's young core and veteran leadership, which he said make him excited about the future. Credit: News 12 New Jersey

FLORHAM PARK, N.J. — After wrapping up the season in discussions with the Jets’ beat writers, one thing became clear: Ownership and the front office plan to be active in free agency.

The Jets have a projected $80 million in salary-cap space for 2018, and that number will increase after several expected roster moves. Those include the release of defensive end Muhammad Wilkerson, which would clear an additional $11 million.

“I think we’ll be very active in free agency, but again we haven’t set our final decisions on allocating our resources,” general manager Mike Maccagnan said Tuesday. “I do think we have a lot of potential to improve this team and focus on players we can acquire that fit in what we want to do both from an ability and a character standpoint.”

The Jets finished 5-11, and despite missing the postseason for a third consecutive season under Todd Bowles, CEO/chairman Christopher Johnson rewarded him with a two-year contract extension. Johnson also took care of the GM with an extra two years, saying starting over with a new group “didn’t seem right.”

So Maccagnan will get a fourth year to try to develop a roster that can reach the postseason for the first time since 2010, though Johnson said there was no mandate from him to do that.

Where the Jets spend their money is uncertain, but it’s clear finding a quarterback is a must. Josh McCown had a career year before breaking his left hand Dec. 10 at Denver, ending his season after 13 starts. Maccagnan said he’s open to McCown returning but understands the dynamics of it.

“Based on what Josh has done, I would have no problem bringing him back, but of course that’s another thing that’s going to play itself out here over time,” Maccagnan said. “He’s a free agent. He has to make the determination from his end with his family of what he wants to do. Everything from our standpoint has been extremely positive with Josh.”

The free-agent marketplace at quarterback is led by Washington’s Kirk Cousins, who might command a massive deal of $25 million to $30 million on average. Teddy Bridgewater, Sam Bradford, Jay Cutler and Case Keenum are other free-agent quarterbacks who might be attractive to the Jets. Johnson said he didn’t tell the front office how much to invest in free agency and that he doesn’t want a short-term answer.

“In a measured but active way,” Johnson said of what to spend. “Will we spend to the limit trying to win this year and throw it all in there? The idea is to win year after year and to be like one of those great franchises that seem to win from year to year to year, and they’re there for a decade. We want to be in that conversation, and I don’t think you do that by overspending on a couple of free agents that will only last you a moment in that longer-range outlook.”

The Jets have 16 unrestricted free agents, and along with McCown, linebacker Demario Davis, cornerback Morris Claiborne and tight end Austin Seferian-Jenkins are priorities. It doesn’t appear those players will get large contracts, though the Jets have held preliminary discussions with the representatives to gauge interest.

Having the cash is the first step to morph the Jets into a winning franchise again.

The Jets will have a projected $80 million in cap space for 2018. That number could increase based on releasing some players. We look at five that could happen.

Muhammad Wilkerson; DE; He underachieved all season and was inactive last three weeks of the season.; $11 million

Buster Skrine; CB; Had a strong season but has the third highest cap number in 2018 at $8.5 million; $6 million

Jermaine Kearse; WR; The veteran wideout was solid but the return of Quincy Enunwa (neck surgery) could make him expendable.; $5 million

Bilal Powell; RB; He lost a step and there might be better options in the draft.; $4 million

Matt Forte; RB; Was placed on IR with knee swelling and at 32 the end is near.; $3 million

NFL mock draft 5.0Who goes where and when? See Klopsis' latest mock. 5 biggest questions facing Jets in the offseason 1. Who will be the Jets' starting quarterback in 2018?The Jets probably don't know the ...