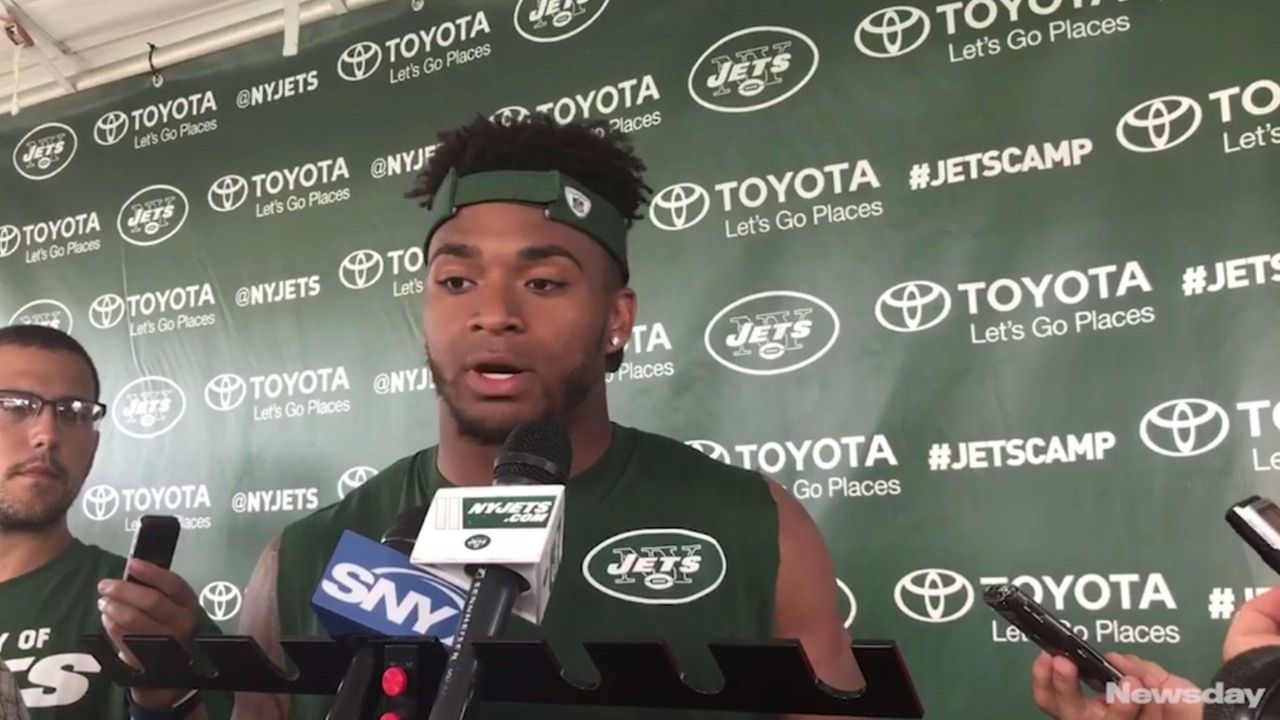 Jets rookie safety Jamal Adams faced questions on Tuesday, Aug. 1, 2017, about his comments a day earlier at a fan forum with NFL commissioner Roger Goodell. "If I had a perfect place to die, I would die on the field," Adams said Monday. On Tuesday, he clarified his meaning. Credit: Newsday / Kimberley A. Martin

FLORHAM PARK, N.J. — Jamal Adams had tried to convey his love affair for the game, going so far as to tell Jets fans on Monday that he would “die on the field” if he had his way.

But within hours — perhaps even minutes — of making that statement at a fan forum with NFL Commissioner Roger Goodell by his side, the rookie safety realized the weight of his words. And a day later, he clarified that he never intended to sound insensitive to concerns over chronic traumatic encephalopathy (CTE).

“When you see something that’s blowing up, that’s on “First Take” and ESPN, I think it should be addressed,” Adams said. “My words were simply that I’m very passionate about what I do. I said at the beginning [of the fan forum] that I’m all about making the game safer. I understand the CTE symptoms and whatnot and what families are affected by it. But it’s simply about passion.”

He said his love of the game is “indescribable,” adding that he views playing football as his “job now.”

The event, which was held at the team’s facility, was attended by 150 people who came to see Adams and fellow panelists Goodell and running back Matt Forte discuss concerns about player safety.

“I’m all about making the game safer,” Adams said on Monday, although he admitted he’s “not a big fan of it” as a defensive player who’s known for delivering punishing hits. But the depths of his devotion to the sport rubbed many the wrong way. “Literally, if I had a perfect place to die, I would die on the field. And that’s not a lie,” said the No. 6 overall pick, whose comment was immediately cheered by the crowd.

But the blowback was intense and immediate.

Many — including current and former players — viewed his remarks as tone deaf, considering last week’s report of a study that found 110 of 111 deceased former NFL players showed evidence of CTE.

“I hope all these young cats that are willing to die for the game of football find a higher purpose in life,” tweeted Packers tight end Martellus Bennett. “Look football is great but I ain’t dying for this stuff. Lol.”

Others, however, understood Adams’ enthusiasm and love for the game.

So the rookie believed it was necessary Tuesday to clear up his comments, which quickly had become fodder for sports TV and talk-radio.

“Honestly, I really did not see it getting that far,” Adams said of the firestorm. “Again, I was speaking about being passionate about the game that I love. I understand that some families were affected by this disease (CTE). And I definitely didn’t mean it any type of way.”

Adams said he and his father, George — a former NFL running back who spent five seasons with the Giants — discussed the situation. But he declined to divulge what was said between the two.

He did note that he spoke to Jets coach Todd Bowles about the incident. “He basically just said that, you’ve got to clear it up,’ ” Adams said. “He understood what I said. And it’s all about passion. But I can see where it affected some families and some people. But again, it’s all about passion and love for the game.”

Asked if he was surprised by the applause from fans at the forum, Adams replied: “I can’t control what other people [do] or how they viewed it. All I can do is give my point of view.”