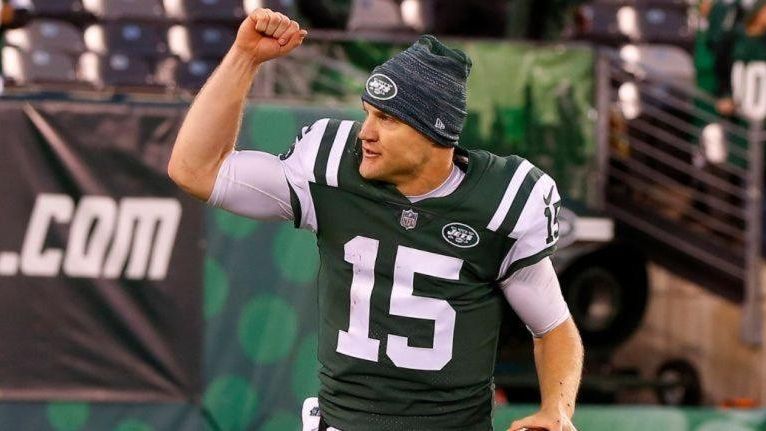 Jets quarterback Josh McCown spoke to the media on Wednesday, Dec. 6, 2017, after head coach Todd Bowles said McCown would be the team's starter for the rest of the season. Credit: Newsday / Calvin Watkins

FLORHAM PARK, N.J. — On the day he was named AFC Offensive Player of the Week, Jets quarterback Josh McCown received another gift: Todd Bowles quietly made a proclamation Wednesday that McCown would start the remaining four games of the regular season as the Jets make a playoff push.

“I’ve been saying that,” Bowles said.

Bowles repeatedly has backed McCown as the starter with Bryce Petty and Christian Hackenberg on the bench. Bowles’ thought process has been clear: As long as McCown was playing well, there was no need to change quarterbacks.

Petty hopes to start at some point, but understands why the 38-year-old McCown is playing.

“What’s an ego?” Petty said. “As a competitor, you want to play but at the same time, for his career and what he’s going through, how do you not root for a guy to finish it outright? As productive as he’s been, you want to see that. I’m young. I’m going to get my shot. I know that for a fact. I’m just going to keep working.”

Hackenberg and Petty were given plenty of chances to overtake McCown in training camp and the preseason but McCown outplayed both and was awarded the job.

The questions didn’t stop regarding McCown’s status and after a 25-20 loss to the Falcons on Oct. 29, Bowles made a firm statement about where he stood.

“I’ve looked at all my young quarterbacks this summer,” he said. “Josh is my quarterback.”

When McCown takes the field Sunday at Denver, he will tie his career high in starts at 13 and continue his goal of playing a full season, something he hasn’t done in his 15-year career.

“It’s something I’d like to accomplish, there’s no doubt about it, and it’s a one-game-at-a-time mentality,’ McCown said. “I have a ton of respect on who played and started for a long time for consecutive games, whether it’s [Brett] Favre, Tom [Brady] or Peyton or Eli [Manning]. It’s impressive what these guys have been able to do. For me, especially at this point of my career, to play 16 games is something to be proud of.”

McCown already has set career highs in passing yards (2,880) and touchdowns (18) and his completion percentage (67.8) also would be a career high.

McCown leads the AFC in third-down passing with a 103.6 quarterback rating and his 1,043 passing yards on third down ties the Eagles’ Carson Wentz for the NFL lead.

No wonder McCown remains the starter.

“As a competitor, you expect to play well,” McCown said. “Your goal is to play well. That was my mindset going into each week. I appreciate [Bowles] saying that, but for me, my mindset, I think every guy in this locker room when your number is called, you will play until you’re not in. That hasn’t changed. I will continue with that mindset.”