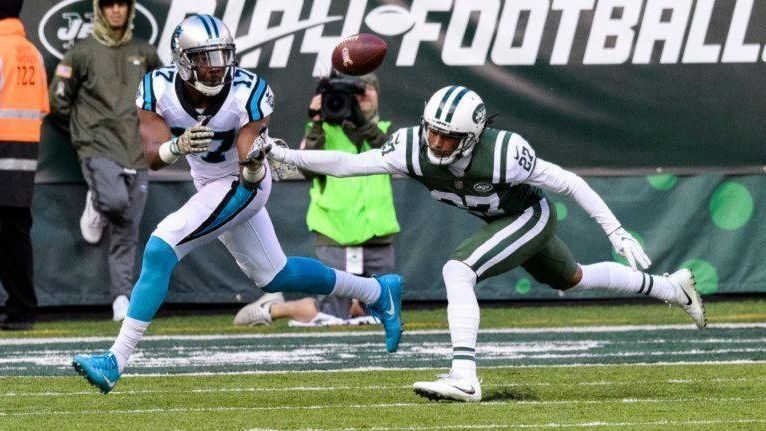 The Jets lost to the Panthers, 35-27, on Sunday, Nov. 26, 2017 at MetLife Stadium, most likely ending any wild-card hopes. After a three-game winning streak that gave the Jets hope for a playoff berth, they have lost lost five of their last six to drop to 4-7.  Credit: Newsday / Calvin Watkins

The Jets had another chance to make something of their inconsistent season. But there’s a reason they are inconsistent, and they lost another fourth-quarter lead Sunday while failing to take advantage of an opponent clearly not at its best.

The Jets lost to the Panthers, 35-27, at MetLife Stadium, most likely ending any wild-card hopes. After a three-game winning streak that gave them hope for a playoff berth, they have lost five of their last six and fallen to 4-7.

So this is about a team trying to change the narrative of “Same Old Jets,” and it can’t.

The Jets again had the same problem: finishing a game. For the third time this season, they coughed up a fourth-quarter lead, and they have no clear explanations why.

“I’m just lost for words,” cornerback Morris Claiborne said. “I can’t really put my finger on it as to what it is. What are we not doing enough of to close the games out? Why are we so dominant early on in the game until in the fourth quarter with a couple minutes left on the clock? I don’t know what the reason is.”

In the last four games, the Jets have been outscored 46-30 in the final quarter, and Carolina had a 17-10 edge in the fourth. Questionable coaching decisions and mistakes cost the Jets, because if they had converted some plays, they might be inching closer to postseason contention.

“Not much to say,” safety Jamal Adams said. “We didn’t finish. We didn’t make the plays we needed to.”

Trailing 18-17, the Jets had first-and-goal at the 1 early in the fourth quarter. Offensive coordinator John Morton called three consecutive pass plays, all incomplete.

The second-down throw was caught for an apparent touchdown by tight end Austin Seferian-Jenkins, but a replay review overturned the call, saying he bobbled the ball as he hit the ground. On third down, Josh McCown, on the move, threw wide of Matt Forte in the back of the end zone. The Jets settled for Chandler Catanzaro’s 19-yard field goal and took a 20-18 lead with 14:01 to play.

Three failed pass plays from the 1, all to the right side of the field, led to questions.

The Jets forced a three-and out, but on second-and-11 from the 45, McCown fumbled as he was sacked by Wes Horton. Linebacker Luke Kuechly scooped up the ball and ran 34 yards for a touchdown with 12:05 left. Cam Newton ran in the two-point conversion and Carolina led 26-20.

“I was just trying to throw the ball away,” McCown said of the fumble.

The Jets were still in the game, down only six, but they went three-and-out. Punt returner Kaelin Clay slipped past two Jets for a 60-yard touchdown with 9:54 left that made it 32-20.

“The fact that nobody tackled him, everything went wrong,” Bowles said.

So now the Jets must wonder what happened, yet again, in a winnable game that could have changed their season.

“The only team that can really beat us is ourselves,” linebacker Darron Lee said. “I feel real confident nobody in this league can genuinely, genuinely beat us when we execute. That’s the thing, we got to execute. We’re shooting ourselves in the foot. [Allowing] 17 points in the fourth quarter is not going to get the job done. It’s all on us, it really is.”

The loss spoiled a wonderful performance by Robby Anderson, who had six catches for 146 yards and two scores. Newton was sacked three times and compiled a 59.8 quarterback rating. The Panthers (8-3) still won their fourth in a row and tied the Saints for first in the NFC South.

McCown threw for 307 yards and three touchdowns, but the Jets, regardless of the stats, didn’t finish the game.

“There are certain guys that don’t play smart football at certain times,” Bowles said. “It’s not everybody. It’s one guy here or there at certain plays. It’s not an abundance of plays. We have to be better at that.”

Giants Q&A: Did Toney leaving affect game plan?
Williams understands fans' frustration, not their reaction
Veteran Gibson might be starter for Knicks' opener
Road has been unkind to Isles, but easing of restrictions has helped
Kakko placed on injured reserve with upper-body injury
Giants dishonor 2011 team by getting routed by Rams
Didn’t find what you were looking for?