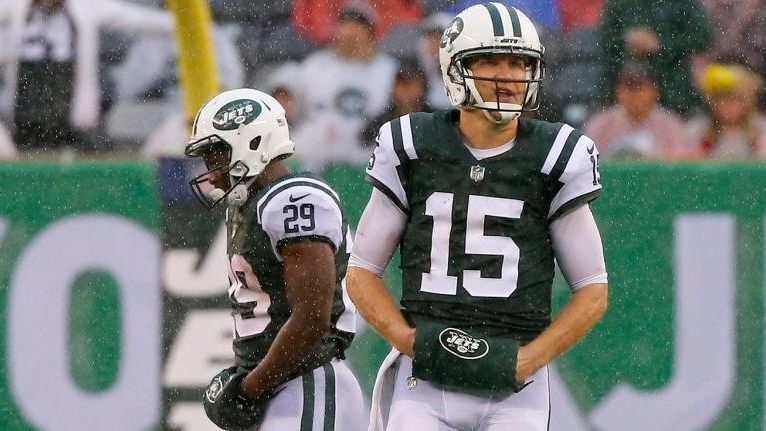 The rain was falling and then it was swirling at MetLife Stadium, so it wasn’t easy to catch a slick football in the wind-whipped deluge. It reminded Robby Anderson of when he was a kid, playing out in the fickle Florida weather.

“Growing up in Florida, it rained on and off throughout games, Little League, flag football,” said Anderson, who was born in New Jersey and raised in Fort Lauderdale. “So it’s just embracing it from that perspective and just blocking out the rain and just focusing on the ball.”

The Jets (3-5) came from ahead to lose for the third straight game, falling to Atlanta, 25-20, Sunday. But Anderson’s focus, speed and playmaking skills stood out among the soaked crowd down on the field.

The second-year receiver from Temple was targeted six times by Josh McCown and caught every pass thrown his way, including one when he blew by cornerback Desmond Trufant and hauled in a 24-yard touchdown. Anderson had the first 100-yard game of his NFL life, coming in at 104, with a long gain of 32.

“I would’ve felt a whole lot better if we would’ve came on top,” he said.

He showed his frustration over losing the previous Sunday at Miami, throwing his helmet near the end of a 31-28 loss after the Jets led 28-14 in the fourth quarter. This time, there was no tantrum while a 17-10 second-quarter advantage and a 17-16 fourth-quarter lead turned into yet another defeat. But the frustration was bubbling again.

“We’ve been right there and we’re just not finishing out,” Anderson said. “So it’s been tough, honestly. It’s just growing pains. We’re going to get over this hump.”

“He’s an explosive guy,” receiver Jermaine Kearse said. “The speed that he has to stretch the field, guys got to respect it. And they better start respecting it quick because he’s hit a couple of people over the top.”

“Robby’s just continuing to step into the kind of next realm,” McCown said, “that next echelon of the player that we believe he can be.”

The Jets’ next try at winning comes Thursday night against visiting Buffalo.

Rangers' Barron knows time on roster could be expiring
Knicks can't stop Bridges (38 points) in loss to Hornets
Isles not overwhelmed about the road ahead
Nash: 'Unfortunate play' will sideline Durant for 'weeks'
LI's Joe Smith Jr. defends his title against Steve Geffrard
Time for Baseball Hall of Fame ballots to be made public
Didn’t find what you were looking for?