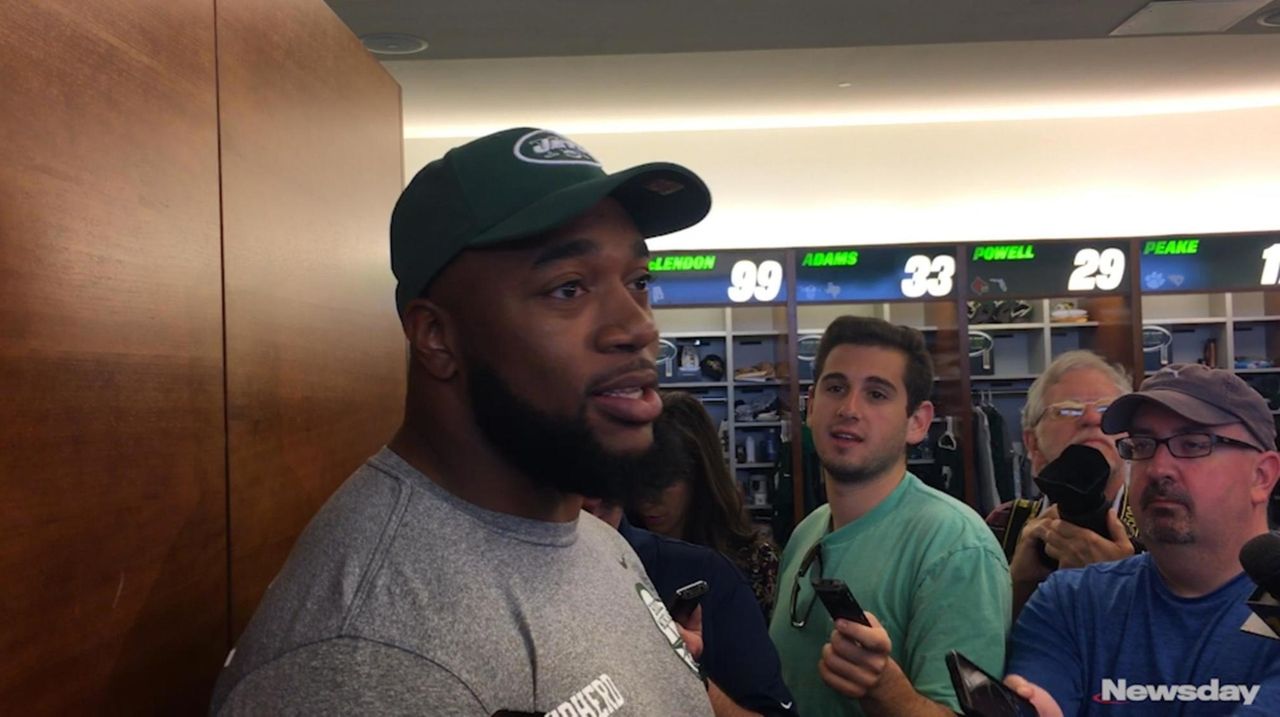 Nathan Shepherd, a third-round pick of the Jets, speaks at rookie minicamp on Saturday, May 5, 2018, at the team's training facility in Florham Park, N.J. Credit: Newsday / Calvin Watkins

FLORHAM PARK, N.J. — Nathan Shepherd is appreciative of his path to the NFL. Just to get into college, the Jets’ third-round pick from Fort Hays State had to save $12,000 for school.

He didn’t get a loan. He worked at a plant nursery and a construction job with his father, served as a bouncer at a bar, worked for a moving company and was an overnight camp counselor.

It all worked out when he walked on at Fort Hays State as a defensive lineman, proved himself after one season and earned a scholarship. Over three seasons, Shepherd became one of the best players in the Mid-America Intercollegiate Athletics Association and in 2017 was named the conference’s defensive player of the year. In his senior season, he had 38 tackles, 12 ½ tackles for a loss and four sacks.

“Nothing is going to come easy,” Shepherd said Saturday during the Jets’ rookie minicamp. “It’s really [asking] you to reflect on how much football means to you. You’re not making money. You’re just getting by, when you look at it. Am I getting ahead in life or am I just getting by? Everyone wants to get ahead in life, so for a large portion of my life, amateur status as an athlete, it was just scraping by, just getting by. Now that I’m here, I feel like I’m getting the pay that I deserve for all the hard work I was doing in the past.”

So now, instead of counting pennies, Shepherd talks with his financial adviser about how much he has to pay in New Jersey taxes out of his checks from the Jets.

“Taxes are no joke,” he said. “I don’t think I’m getting much spending money.”

Shepherd started his journey in Canada. He went to Simon Fraser University in Vancouver, British Columbia, and left after two years for financial reasons. He didn’t play football in 2013 and 2014 while working all sorts of jobs to save money for a return to school. He even moved back to his parents’ house in the Toronto area to save money.

When he had saved up enough, he walked on at Fort Hays State in Hays, Kansas.

“I didn’t know if he could play football or not,” Fort Hays State coach Chris Brown said. “I didn’t have any film on him, didn’t know what type of character he was, like what type of person that he was. I said you can walk on and prove yourself and show us what type of man that you are, and he did that. He walked on that spring, paid his own way. Tuition is about $12,000 a year, which isn’t real expensive for an out-of-state school.”

Shepherd impressed college coaches and NFL scouts in his senior season. He was invited to the NFLPA Collegiate Bowl but declined in order to play in the Senior Bowl. Shepherd was impressive during two days of Senior Bowl practices before suffering a broken hand that forced him to miss the game.

He remained on the minds of several NFL teams, however, and the Jets were able to get him in the draft. They want him to play defensive end with the flexibility of moving inside, if necessary, as the team tries to improve its dormant pass rush.

Regardless of whether Shepherd is able to do that, his story of missing football for two seasons yet still achieving his goal says something about him.

“You always hear about the bad stories,” coach Todd Bowles said. “Any time somebody has a story like that . . . Obviously, his play comes first and then you find out his journey [and] you can appreciate the man more.”