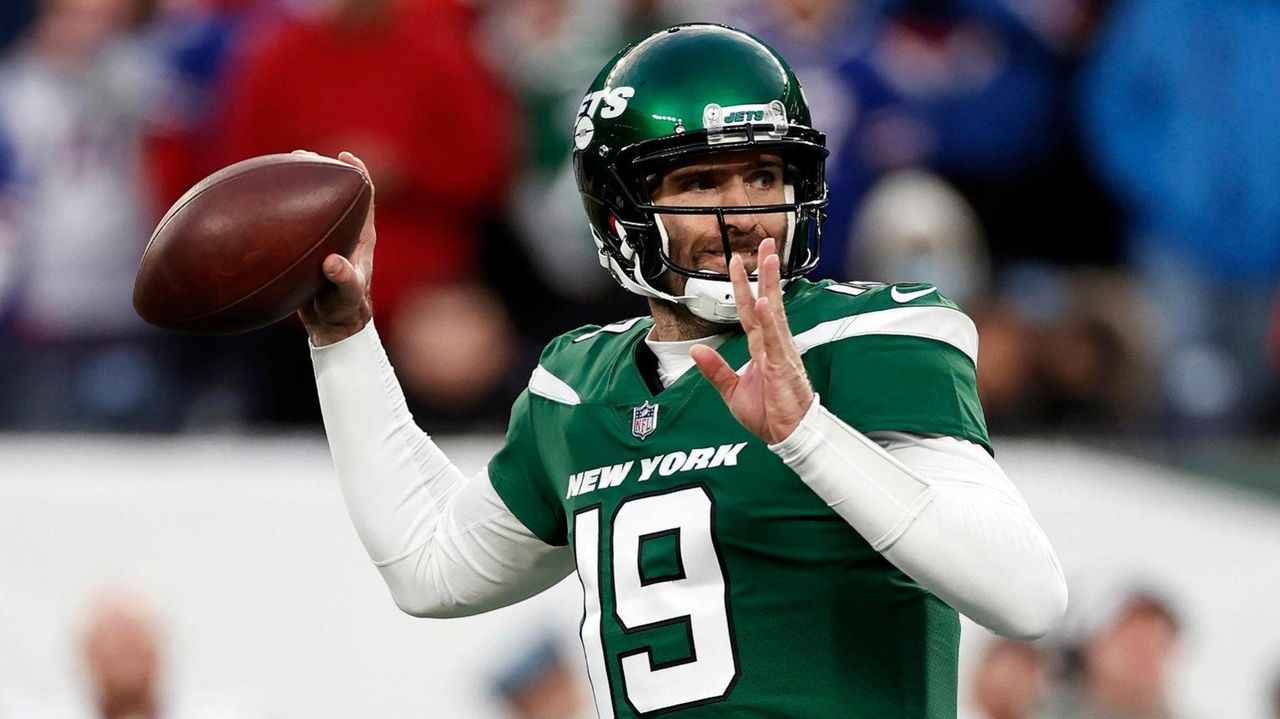 Jets head coach Robert Saleh spoke to the media on Wednesday about the decision to start Joe Flacco over Mike White for Sunday's game against the Dolphins. Credit: New York Jets

FLORHAM PARK, N.J. — Zach Wilson will spend another Sunday watching someone else play quarterback for the Jets and it won’t be Mike White.

Veteran quarterback Joe Flacco will start this week’s game against Miami. This was a surprising move and one that’s frustrating for Jets fans, who want to see Wilson or White play and develop.

But Robert Saleh revealed that Wilson isn’t physically ready to return yet, and the Jets don’t believe White is ready to handle the Dolphins’ blitzing defense. The Jets (2-7) believe Flacco, who was acquired on Oct. 25, is better equipped for the challenge Miami’s cover-zero blitz presents.

"One of the reasons that we went and got Joe was the experience part of it," Saleh said. "Not only for the playing ability and for the [quarterback] room, but also for situations just like this.

"Miami has got a dynamic coverage system . . . Joe’s kind of been there, done that, just kind of a steadying experience that we thought would put us in the best position to win."

Wilson was expected to regain his starting job after missing the past three games with a sprained right PCL. But after Wilson went through a tough workout Sunday, Saleh said his knee still is "not 100%."

Saleh said Wilson didn’t suffer a setback. He was limited in practice Wednesday and is listed as "day-to-day." The expectation is Wilson will return a week from Sunday in Houston.

White started the past three games and was the talk of New York for a couple of weeks.

In White’s first NFL start, he threw for 405 yards and three touchdowns in a Halloween win over Cincinnati. But White threw four interceptions Sunday’s 45-17 loss to Buffalo and was demoted to Flacco’s backup. The Jets believe the former Super Bowl MVP’s ability to process and get the ball out quickly is best for the overall development of this young team.

"If the guy holding the ball can’t get it to people trying to develop in a timely manner you can struggle," Saleh said. "Not that we don’t have faith in other guys, but Joe with the defense that we’re facing, his experience, it was a decision that we felt with his calm and his experience he can get the ball to our playmakers and they can go make plays."

Flacco got a text Tuesday night from Saleh and a call from senior offensive assistant Matt Cavanaugh informing him that he would be starting. The 36-year-old relishes this opportunity.

"Listen, you can’t take this game for granted," Flacco said. "I’m 14 years in now and I want to play now more than ever."

The emotions were different for White, naturally.

Saleh said White expressed "a lot of disappointment" when he was told that he would be the backup. But Saleh said the Jets are excited about White’s future and intend "to work with him as many years as possible."

On Monday, Saleh passionately defended White, who was heavily criticized after the awful Buffalo game. Saleh said, "Now everyone wants to throw him away. He deserves better than that."

You could say that White deserved better from the Jets, but Saleh defended his remarks

"My comments on Monday were because people wanted him out of New York," Saleh said before adding that White has proved "that he’s a capable quarterback who can play in this league and can do a lot of good things.

"This particular situation with Miami presents a completely different challenge," Saleh said. "This is kind of why we brought in a guy like Joe for situations just like this and his experience to be able to play systems of Miami caliber."

The Jets acquired Flacco from Philadelphia for a conditional sixth-round pick the day after Wilson sprained his knee in the New England game. Flacco was inactive the first two games and served as White’s backup on Sunday.

After White got the wind knocked out of him on a fourth-quarter sack, Flacco entered and completed all three pass attempts, including a 15-yard touchdown to Elijah Moore.

Flacco spent last year with the Jets as Sam Darnold’s backup, and started four games. One was against Miami, and Flacco struggled mightily. He threw for 186 yards, no touchdowns and one interception in a 24-0 loss.

But Saleh said that game is "irrelevant" because everything about the Jets has changed.

Glauber: Saleh's waffling aside, calling on Flacco's experience makes senseJoe Flacco has a better chance at winning than Mike White, who doesn't have the ability to at least keep the blitz-happy Dolphins honest the way Flacco does.

NYCFC tops Revs in PKs to reach club's first ever conference final
Nets lose 16-point lead but hold off pesky Knicks
Barker: Time for Randle to emulate Durant's heroics
Knicks have no answer for Harden in loss to Nets
Mets in good, if incomplete, shape as baseball lockout seems imminent
Yankees tender contract to Gary Sanchez
Didn’t find what you were looking for?