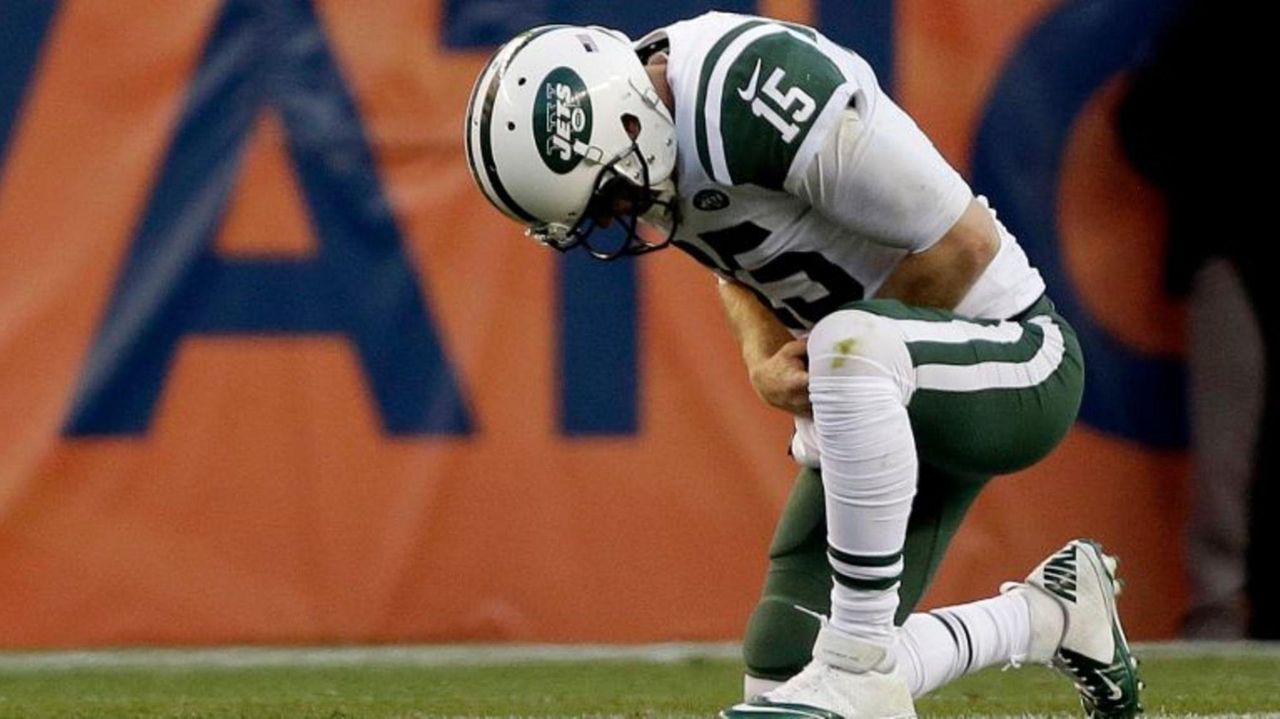 Jets quarterback Josh McCown was emotional while speaking with the media after the team's 23-0 loss in Denver to the Broncos on Sunday, Dec. 10, 2017. McCown suffered a broken left (non-throwing) hand and a sore lower back in the game at Sports Authority Field at Mile High. It was the first time the Jets had been shut out since Oct. 5, 2014, in a 31-0 loss to the Chargers. Credit: Newsday / Calvin Watkins

DENVER — The starting quarterback stood at the podium choking back tears. The starting tight end said he was embarrassed. The starting safety said his team needed to practice better, and the coach waved the white flag with about two minutes left in the game.

The Jets imploded at Sports Authority Field at Mile High on Sunday at the worst possible time. It was an abysmal performance in a game they needed to win to keep their slim playoff hopes alive.

A 23-0 loss to the Broncos dropped the Jets to 5-8, their playoff chances all but over. They also may have lost starting quarterback Josh McCown for the season with a broken left (non-throwing) hand. McCown is expected to seek a second opinion on Monday.

If the tests say McCown can’t finish the season, it will be up to Bryce Petty to start Sunday at New Orleans. But Todd Bowles didn’t let him do much of anything when he relieved McCown late in the third quarter and for the second time in the game.

Petty completed only 2 of 9 passes for 14 yards with a 39.6 quarterback rating.

With two minutes remaining in the game and the Jets down by 23 points, Bowles elected to run the ball three times and punted with 39 seconds left.

Instead of trying to avoid a shutout, he just wanted to get back home.

“The game was out of reach,” he said. “We ran it real late in the game. We tried to throw the ball, but obviously we couldn’t get anything going offensively.”

Denver (4-9) had lost eight games in a row, but the Jets’ offense, with McCown in the game, didn’t register much. The Jets produced only 100 yards of total offense, and they reached the century mark with about two minutes remaining.

McCown was sacked four times and hit five times, leaving the game in the second quarter with a hip pointer and in the third quarter with the broken hand.

Offensive coordinator John Morton lost running back Elijah McGuire to an ankle injury on the Jets’ first snap, and McCown just couldn’t find any rhythm. He overthrew Robby Anderson in the second quarter on a pass that was intercepted at the Broncos’ 15.

The offensive line was inconsistent, as the Jets averaged 2.6 yards per carry, and their performance on third down was pathetic. After converting a season-high 65 percent of their third-down plays in last week’s victory over the Kansas City Chiefs, the Jets were 3-for-13 against the Broncos.

The offense averaged a season-low 2.1 yards per play as the Jets were shut out for the first time since Oct. 5, 2014.

“I’m embarrassed,” said tight end Austin Seferian-Jenkins, who had one catch for one yard and one drop.

“I don’t really know what to put into words. We had [100 yards], it’s unacceptable. We all hold ourselves to a high standard and we didn’t deliver today. We got to get back to practicing and work our butts off and get ready for New Orleans because New Orleans is a great team.”

The Jets fell to 1-5 on the road, and most of the players had no real answers why.

“Got to stay together,” safety Jamal Adams said when asked about Bowles’ message to the team. “We didn’t play our best ball. We don’t prepare well at times during practice, so we’ve got to lock in at all times as a team and get better. It’s just not one side of the ball, it’s everybody.”

Bowles said his team was outplayed and outcoached.