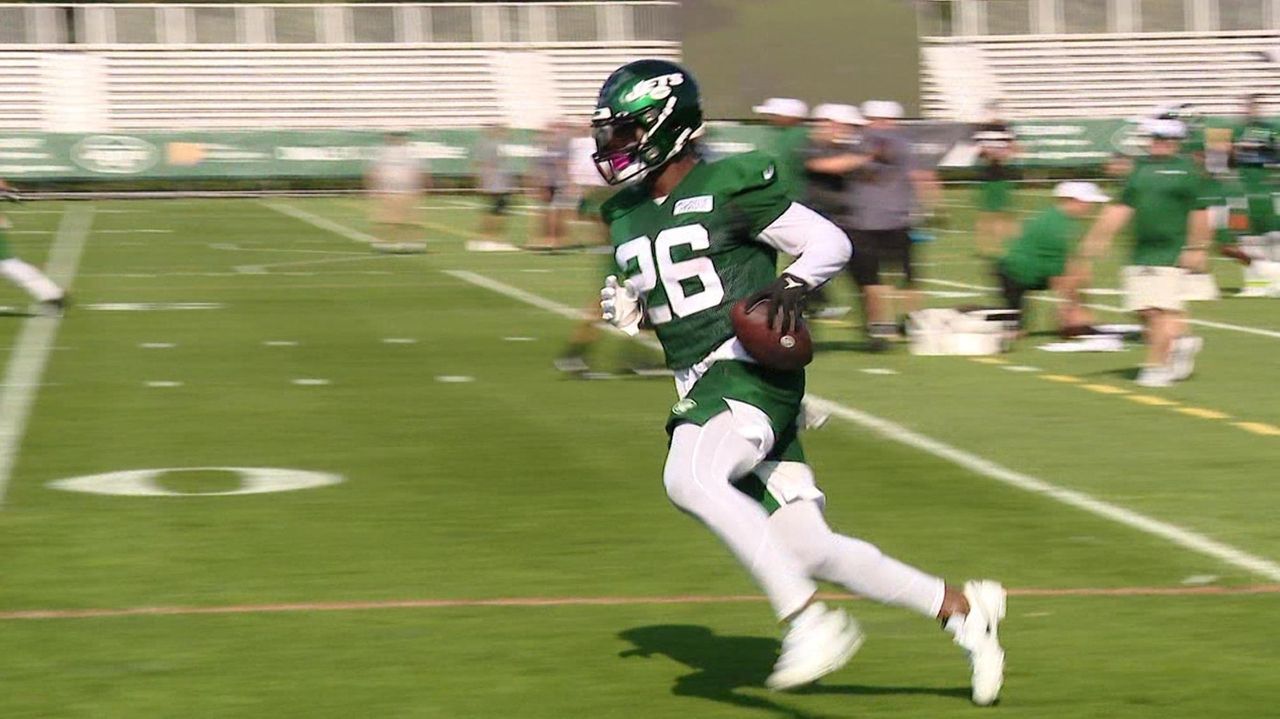 Running back Le'Veon Bell, the Jets' marquee free-agent signing, said on Thursday, the team's first day of training camp practice, that he feels fresh and wants to show he's better than ever after sitting out last season amid a contract dispute with the Steelers. Credit: News 12 Long Island

FLORHAM PARK, N.J. – Le’Veon Bell was so fired up to be back in an NFL training camp that he said he did his conditioning test twice.

Bell couldn’t hide his excitement about being on the field again Thursday after sitting out last year over a contract dispute with the Steelers. Following the Jets’ first practice of the season, he said he’s ready to be their workhorse.

"I’m up for 500 [touches] if it’s going to take us to the Super Bowl,” Bell said. “Don’t matter how many touches I get. I’m just trying to win games. If I have 19 touches and we win the Super Bowl, do you think I care? No, I don’t. I just want to go out there, do what I can and help this team win games.”

Bell, who the Jets signed to a four-year, $52.5 million deal in March, said several times he doesn’t care about his numbers or stats. But the three-time Pro Bowl running back does have a chip on his shoulder to prove he made the right move to sit out on principle and that it didn’t hurt his game.

“I expect to be better,” Bell said. “I don’t want to just say I’m going to be how I was two years ago. Each and every year I feel like I want to be a better player. I’m confident. I feel like I’m healthy. I’m ready to go out there and perform.”

Jets coach Adam Gase plans to spread the ball around, but make no mistake, the Jets didn’t sign Bell just to be a decoy.

The Jets’ offense should be vastly improved under Gase, who Bell called “a mastermind on offense.”

Sam Darnold is entering his second year, and he has more weapons with Bell, Ty Montgomery and Jamison Crowder joining returnees Robby Anderson and Quincy Enunwa. Bell’s presence should help open things up for all of them.

The Jets are going to be smart with Bell and lighten his load, at least in training camp and the preseason. Gase plans to ease Bell back in after he sat out last year.

Bell only had four touches in practice Thursday, but the Jets didn’t run that many first-team plays. Still, Gase said they would monitor Bell to keep him fresh. But Gase wouldn’t say how much Bell would play in the preseason, if it all.

“He’s been great with me as far as telling me how he feels,” Gase said. “We’re always going to keep a close eye on that especially when a guy has had as many touches over his career as he has.”

Bell said the coaches have to “hold me back” and “protect me from myself” because he will go all-out every rep he gets. But Bell said he would listen to them.

He also tried to dismiss the notion that he’s rusty after not playing in a game since January 2018. Bell, however, did say the rest did him good and it will show.

“When you play a season, your whole body doesn’t really recover coming into that next season,” he said. “I’ve had that time where I literally recovered. Playing in 2017, I don’t remember the little kinks and things I had. I don’t remember where they were at because I feel rested and good. My joints feel good. I’m excited and ready to play.”

Le’Veon Bell is used to carrying a heavy workload. He’s averaged 285 touches in his five-year career, which includes a 2015 season when he played only six games because of a two-game suspension and a season-ending knee injury:

Alfonzo named manager of Staten Island team in Atlantic League
Pulock skates with Isles, timeline for return still uncertain
As Knicks' struggles persist, consistency remains an issue
Even with all the hurdles so far, Nets still in good position
Nets' Durant expected to miss All-Star Game again
Nets start strong without Big 3, but lose to Nuggets
Didn’t find what you were looking for?