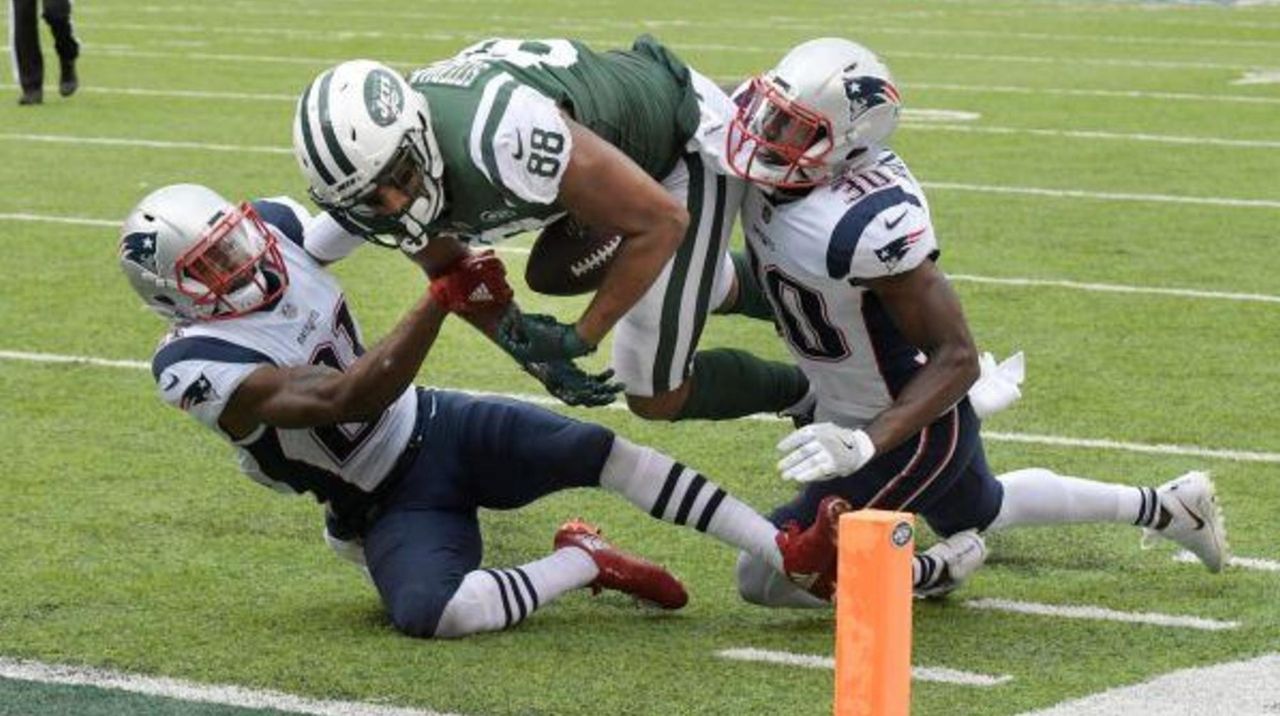 Twenty-four hours later, the Jets still didn’t understand why the NFL took away a fourth-quarter touchdown reception from tight end Austin Seferian-Jenkins in the 24-17 loss to the Patriots.

A common theme emerged from them regarding the play, however: Let it go.

“It doesn’t matter today. We’ve got to move on to Miami,” Todd Bowles said Monday in a conference call. “It’s not going to change, so it really doesn’t matter. It’s not worth talking about it for me.”

Al Riveron, the NFL’s senior vice president of officiating, said Monday that the controversial replay reversal was the correct call and proper enforcement of league rules.

With the Jets trailing 24-14, Seferian-Jenkins initially was awarded a touchdown when he took a short pass from Josh McCown and lunged into the end zone with two defenders on him. But a replay review determined Seferian-Jenkins lost possession of the ball shortly before he reached the goal line after being hit by cornerback Malcolm Butler, and he did not regain possession fully until he was out of bounds. The play was ruled a touchback, and the Patriots took over at their 20-yard line.

Riveron’s confirmation of the call didn’t make the Jets feel any better. Seferian-Jenkins said he watched the replay four times and still didn’t get it, and he wasn’t alone.

“No, I don’t,” quarterback Josh McCown said Monday. “It’s really the same response as (Sunday). I don’t know. It’s not my call and those guys make it, we’re all excited, we thought it was good. The league has put a ton of resources into trying to get these things right, and so ultimately when you bring in the replay and send it to the league office, and everybody is looking, you hope all those eyes on it make the best decision and fairest thing in evaluating the rules as best they can.”

Although it was difficult to tell on replays that Seferian-Jenkins hadn’t re-established possession when he went down in the end zone, Riveron said he had no doubt that he did not have possession before going out of bounds.

“Once [Seferian-Jenkins] is going to the ground, we see the ball is loose,” said Riveron, who makes all replay determinations from the league’s Manhattan office. “Now, we know we have a fumble. By rule, he has to re-establish possession, must regain control of the football again. We see in two other instances where the ball is loose, he has not regained control of the football before he lands out of bounds. By rule, we have a touchback. We might not agree with the rule, but that is the rule. So the rule was enforced correctly.”

Seferian-Jenkins took the high road when asked about the play, saying he thought he scored but noted he should have controlled the ball after getting hit.

“I feel like I scored, but at the end of the day, that’s what the ref called,” he said. “I’m going with what the ref said, and I have to have better ball security. I have to make sure I make the necessary corrections so that doesn’t happen again.”

Riveron said the NFL’s Competition Committee previously discussed the ruling on possession in the end zone, and that the topic likely will come up again. One of the biggest issues is giving the defense the ball because a fumble goes out of the end zone. Had Seferian-Jenkins fumbled out of bounds before reaching the end zone, the Jets would have retained possession where the ball went out of bounds.

The Jets did their best Sunday to move forward from the controversial play. Chandler Catanzaro’s 28-yard field goal with 3:40 left cut their deficit to 24-17, but the Patriots held on when McCown’s fourth-down pass fell incomplete with 12 seconds remaining.

The Jets visit the Dolphins on Sunday.

“You can’t live in the past,” Jets defensive tackle Steve McLendon said. “It’s something you can’t control. It’s over with, the game is over with. I told the guys when I left the stadium, ‘Listen, remember this feeling. Remember how this tastes, but now it’s on to Miami.’ We have to take our show on the road.”