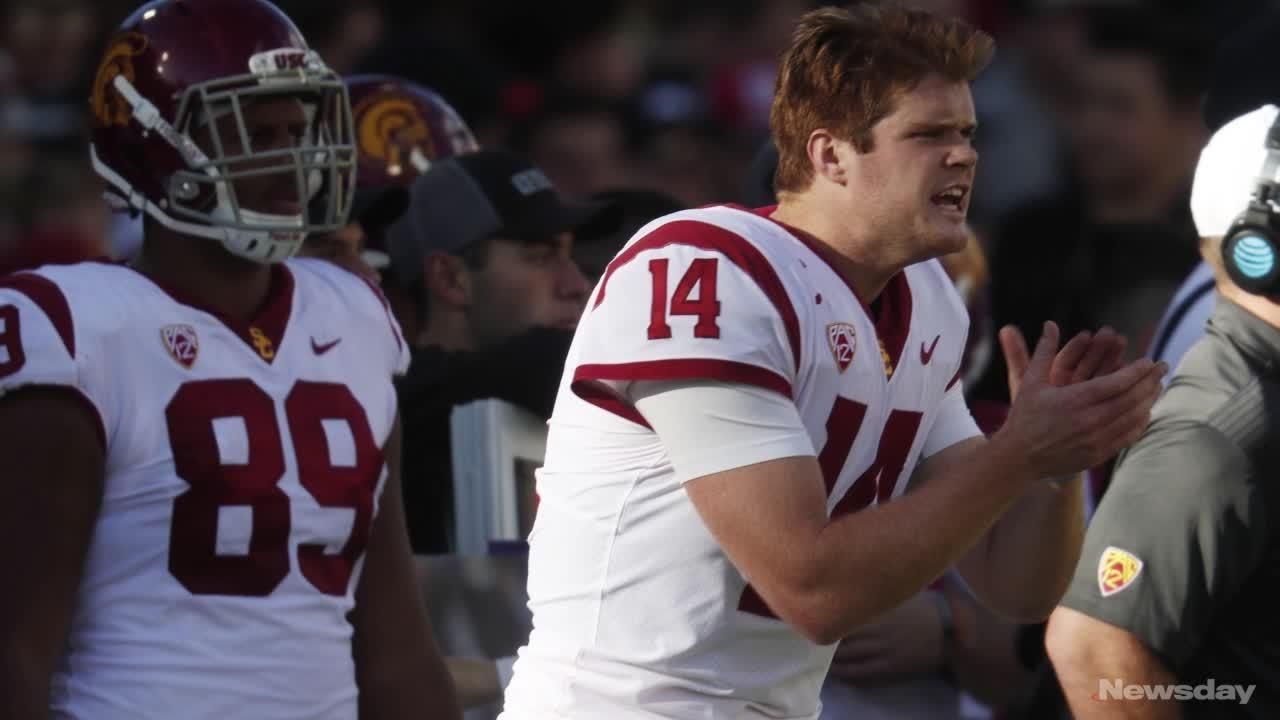 The Jets selected USC quarterback Sam Darnold in the first round of the NFL draft on Thursday, April 26, 2018. Newsday.com's Nick Klopsis breaks down the pick. (Photo credit: AP/Getty Images)

There are things that players glean from their college football experiences that help prepare them to become more comfortable in the NFL. For many, it’s a coach who has worked in the pros who can tell them what to expect once they get to the highest level of the sport. For others, it’s a chance to compete against the top opponents, not only to measure one’s self but also to learn to deal with failures along with successes.

For Sam Darnold, quarterbacking at USC gave him a taste of what it’s like to live in the spotlight. To be the face of a team. To have to answer for every aspect of its performance, even when it had nothing to do with him.

In short, it prepared him for this.

“For the opportunity to go to a big stage like New York City,” Darnold said last month at the NFL Combine.

Now he’s here, the latest quarterback to land in the Big Apple and try to add his name to the very short list of passers who have led teams to a Super Bowl title.

Darnold was chosen by the Jets with the third overall pick Thursday night, stepping onto a stage that has turned some into stars and others into footnotes. It’s a town where patience is impractical, where winners are glorified forever and losers are quickly dismissed.

His SoCal chill screams more boogie board than Broadway, but Darnold said he is ready for everything that comes with being the quarterback of the Jets. The bigger question may be whether he is ready to play.

“Darnold is my number one guy because I think he can beat you from both inside the pocket and outside the pocket,” NFL Network draft analyst Mike Mayock said last week, comparing the ginger-haired gunslinger to Brett Favre.

It’s a lofty juxtaposition, for sure, and Darnold’s game does have flaws. He had 22 interceptions and 21 fumbles (14 of them lost) in 27 games at USC. His fundamentals are askew.

“He’s much more of a baller at this point than a nuanced, technical quarterback,” ESPN’s Greg Cosell said last week. “So the question is, where do you fall on that spectrum between being kind of a pocket technician with pocket efficiency — Darnold needs a lot of work in that area — versus sort of a second-reaction playmaker, which, if we were having this conversation 10 or 15 years ago, no one would even be discussing that. But now a lot of people discuss that, and a lot of people like that as a top two or three trait to be an NFL quarterback. Darnold certainly gives you that trait more than he gives you pocket efficiency.”

This was a quarterback class in which there didn’t seem to be any perfect answers. All of the top prospects had red flags. It was just a matter of how much teams were willing to stomach when assessing their own future at the most important position in the sport.

It’s the upside that drew the Jets to him with their most valuable pick in a generation.

“He doesn’t always make it look pretty, but he’s the guy who people think in the clutch is the guy you would want on the football field,” ESPN analyst Louis Riddick said. “Someone who’s working really hard on his mechanics and his consistency in the pocket as far as how he delivers the ball from a platform standpoint so he can be more consistent.

“So is he a finished product? No, not by any means at all.”

He’ll either finish up quickly in New York or be finished up quickly by New York.