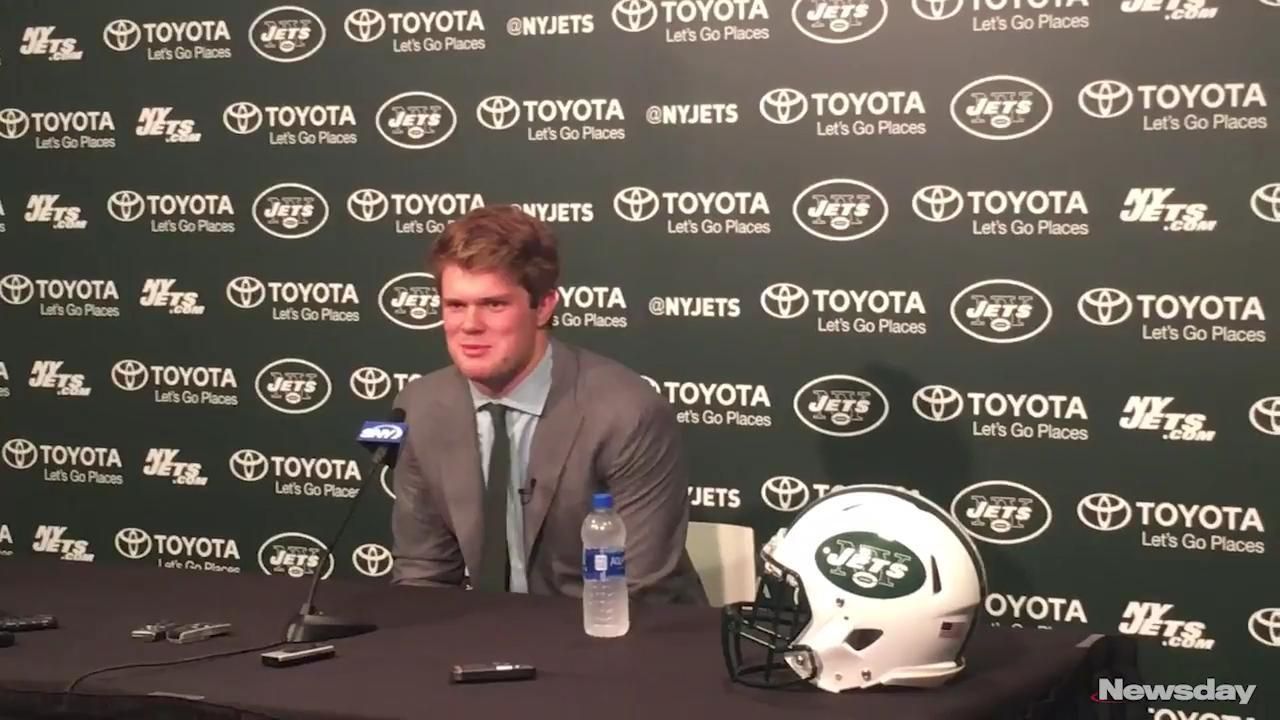 Sam Darnold, a quarterback from USC, was drafted No. 3 overall by the Jets in the 2018 NFL Draft on Thursday night. On Friday, April 27, he was in Florham Park, New Jersey, to meet the media and see the team's facilities. (Newsday/Calvin Watkins) Credit: Calvin Watkins/Newsday

FLORHAM PARK, N.J. — If you think the California kid isn’t ready for the Jets and all that New York presents, think again.

Sam Darnold, chosen third overall in the first round by the Jets on Thursday night, said all the right things during Friday’s introductory news conference. He dressed correctly, too, wearing a dark green skinny tie. His mom, Chris, a physical education teacher, sported a Jets Draft Day baseball cap.

Darnold, who started 27 games at quarterback for USC, didn’t have a favorite pro team growing up but is ready to help the Jets in their quest to find a franchise quarterback.

He may not understand all the history of who didn’t do what, but he knows a little and he wants to deliver.

“I think winning Super Bowls is everyone’s goals entering the season,” said Darnold, who grew up in San Clemente, California. “Whether I’m a backup or whether I’m a starting quarterback, everyone on the team wants to win a Super Bowl. That’s the goal for everyone. Anything short of that is a failure. We’re aware of that, and whatever my role is, I’m going to star in that role to be the best quarterback I can be.”

The Jets have drafted seven quarterbacks in the first round, with only Joe Namath delivering a Super Bowl victory — days after he guaranteed it.

“I’m aware of it,” he said. “Not growing up a Jets fan, I don’t understand it quite to that extent. Again, I’m going to come in here and do my job and be very confident in myself.”

The Jets don’t expect Darnold to become the starter in 2018, at least not in Week 1, but the 20-year old isn’t afraid to take over the starting job or lead a bunch of veterans.

Darnold’s family sure isn’t concerned about him coming to the metropolitan area and succeeding with the Jets.

At USC, Darnold took over during his redshirt freshman season and after two seasons emerged as one of the top quarterbacks in the draft.

“I’m just going to be myself,” said Darnold, who will turn 21 on June 5. “When I was at SC, I got thrown into the mix as a redshirt freshman after being a backup for a few games and for a couple of games being a starter. Going into the coaches’ office on Monday and being named the starter and working with the [first team] and going into that huddle and being able to tell those veteran senior guys this is the play and this is what we need to do. Just being confident in myself and just be myself and be confident.”

Darnold wants to learn, lead the team to a Super Bowl someday and just be one of the guys.

“Just being 20 years old, I know there’s a lot of room for growth,” he said. “But I’m also very confident in my ability to go out there and play, but that being said, I’m going to come in here and learn right away and go about it that way.”