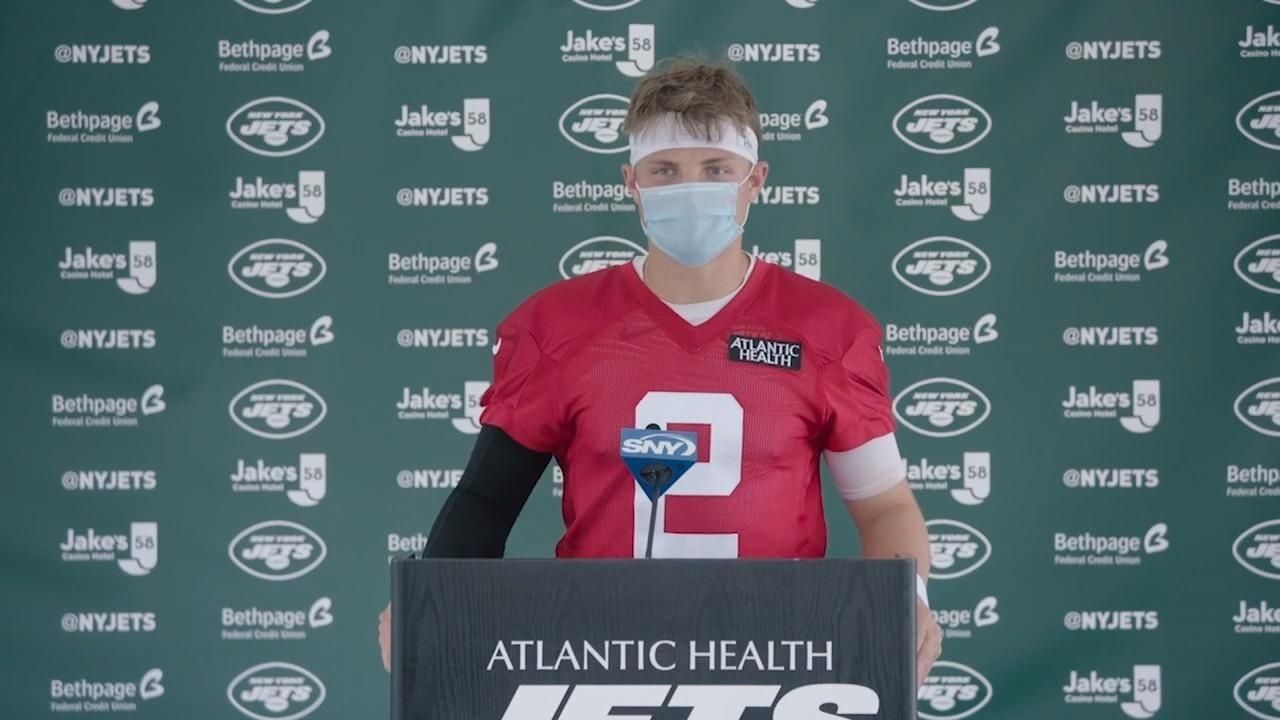 Jets rookie quarterback had his first practice in training camp on Friday, July 30, 2021, after finalizing his contract a few days after the start of camp.

FLORHAM PARK, N.J. — Zach Wilson arrived for Jets practice on Friday an extremely wealthy man, having just signed his rookie deal that includes a $22.9-million signing bonus. But he knows all that money won’t get him the one things he wants.

"You can’t buy a Super Bowl, so I guess I got to work for that," Wilson said. "We’ll go get one of those. We’ll go try and work for one of those. It’s going to be a process."

The process officially started for Wilson on Friday in what amounted to an unimpressive first day of training camp for the Jets’ rookie quarterback.

It started fast with his first pass, going for more than 40 yards to rookie receiver Elijah Moore. But Wilson wasn’t that sharp overall.

He seemed to miscommunicate with some of his receivers and was 5-for-10 passing with a touchdown throw and a bad interception picked by safety Marcus Maye during full team drills. He also was effectively sacked once by defensive end Carl Lawson. In 7-on-7 action inside the red zone, he was 1-for-6 with no touchdowns.

Jets coach Robert Saleh chalked it up to the defense being faster than the offense in Day 3 of camp and Wilson being in his camp debut.

"He is a rookie," Saleh said. "Just like every other rookie there’s going to be ebbs and flows. He starts out with a bang on that go-ball, on the post down the middle of field. But the defense was moving at a very fast rate and the windows were very, very tight.

"I don’t think there’s anything there other than it’s his first day and he’s got to get a little bit caught up."

Wilson missed the first day of camp while his agent and Jets general manager Joe Douglas worked out his rookie deal. The No. 2 pick out of BYU will be paid $35.1 million over four years.

Saleh did not announce that Wilson would be his Week 1 starter, but he said he’s got "the inside lane. It’s his to lose." With Mike White and James Morgan the only other quarterbacks on the roster, it’s hardly a quarterback competition.

Wilson, who attended all of the Jets’ spring workouts, took the red-eye from California Wednesday night when the two sides appeared to be close to an agreement. Wilson came in Thursday afternoon, signed his deal and went right to see offensive coordinator Mike LaFleur to go over what he missed and review some of the installs.

"I wouldn’t say I’m behind," Wilson said. "It was just my first live bullets again. It’s just getting back into the mix. I know my plays. I know my assignments. I know what’s going on and I just got to execute."

Wilson threw the ball down the field more than White and Morgan the first two days.

"We got our quarterback," Moore said.

Saleh is confident Wilson will grow and develop quickly as he spends more time learning the ins and outs of the offense and sees more defenses. The Jets already are impressed by what they saw in the spring.

"He’s already shown," Saleh said. "It’s a process. It’s his arm talent, his relentless drive to find ways to get better, watch film, learn the system. He’ll come in here, he’ll get his feet wet, and he’ll continue to progress. There’s so many things that he’s got to go through.

"There’s so many things that has to happen, so this first day is just one of many."

There are huge expectations for Wilson, but he said he wasn’t nervous nor did he feel any pressure in his first real practice. But he said he has to eliminate some rust.

"Football’s one of the hardest games, especially the quarterback spot, to simulate a game," he said. "You can’t go on a simulator. You can’t go against air. You can’t watch film to simulate exactly what’s going on in practice. So it’s like, how can I train myself so I get ready for that?

"There’s no pressure behind it. The game is fast. You just got to get used to it and catch up to it and how quickly can I process things?"

Kicker Ficken waived. The Jets waived kicker Sam Ficken and signed Matt Ammendola. Ficken, who missed two field goals in practice Friday, spent the past two seasons with the team. The Jets are high on undrafted rookie kicker Chris Naggar. Ammendola was undrafted in 2020 out of Oklahoma State.