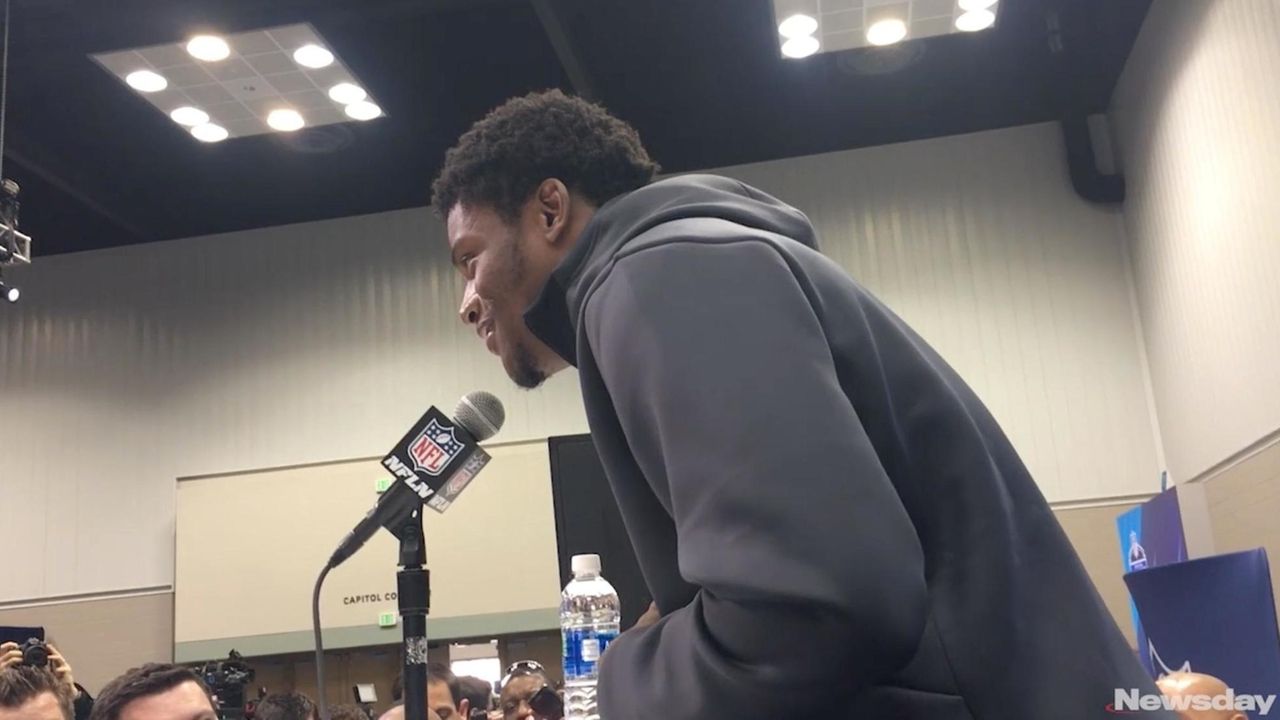 Louisville quarterback Lamar Jackson spoke at the NFL Combine in Indianapolis on Friday, March 2, 2018, about the speculation of a position switch as well as playing with a chip on his shoulder. Credit: Newsday / Calvin Watkins

INDIANAPOLIS – Lamar Jackson wasn’t defiant, but he was pretty much playful in dismissing a NFL Network report some teams want him to work out at wide receiver during the NFL Scouting Combine.

During a fun news conference with reporters on Friday, the Louisville quarterback said he’s not playing wide receiver and wasn’t asked to.

“No teams have asked me to play wide receiver,” a smiling Jackson said. “I don’t even know where it came from. I’m strictly quarterback.”

The 6-3, 213 pound Jackson threw for 9,043 yards and rushed for 4,132 yards in three seasons. He threw 69 touchdowns and 27 interceptions and scored 50 rushing touchdowns. His dual threat ability has some NFL analysts believing he should change positions because of a lack of pocket awareness and the speed he possesses.

Former NFL executive Bill Polian, who was inducted into the Pro Football Hall of Fame in 2015, said Jackson should move to wide receiver.

It seems Jackson has plenty of support in that area.

“Was I surprised they asked Lamar Jackson changing positions? Absolutely,” Ohio State quarterback J.T. Barrett said. “We all watch football and watch that man. He’s dangerous at the QB position. He should stay there.”

Chiefs coach Andy Reid — who coached Michael Vick with the Eagles, a quarterback with a similar style to Jackson’s — wasn’t with Polian or anyone else in favor of a switch.

“Yeah, I’m not much on that,” Reid said earlier this week. “I want to bring him in. Let’s exhaust that other thing that we know he’s good at and see.”

Added Ravens general manager Ozzie Newsome: “On our board, he’s a quarterback.”

The biggest issue with Jackson is finding an offense that suits his skills. He can probably flourish in the run-pass option scheme similar to what the newly crowned Super Bowl champion Eagles used in 2017. Jackson also could perform well in a West Coast offense.

Jackson said he must show NFL personnel people and coaches he can make the necessary throws by staying in the pocket and improve his footwork. His accuracy is a question. He completed 59.1 percent of his passes in 2017, but in his final college game, the TaxSlayer Bowl, he completed just 13 of 31 passes for 171 yards with four interceptions and two touchdowns in a 31-27 loss to Mississippi State.

“I finished the regular season with a 60 percent average,” said Jackson who completed 57 percent of his passes over three seasons at Louisville. “Then bowl game and that happens and I was kinda hurt dang that [expletive] happened to me, things happen.”

Of all the quarterbacks that spoke Friday, Jackson seemed the one with the most questions about what he can’t do, but he handled them with a laugh and a smile.

He thought a reporter was trying to trick him by suggesting he can lineup as a quarterback in the Wildcat Formation.

“No Wildcat,” he said laughing. “It’s not the Dolphins with Ronnie Brown and Ricky Williams.”

Jackson, like Baker Mayfield and Josh Rosen, believes he’s the best quarterback in the draft and said he’s willing to sit behind a veteran quarterback to learn.

“I’m mobile, I can hit any target on the field,” he said. “I love the game with a passion. I can lead my team, I feel like I’m a field general when I’m out there. I love to score I love to put the ball in other receiver’s hands, I’m not a ball hog at all, it may look like but I’m not. I just love wining.”

Kyrie Irving leads shorthanded Nets past Pelicans
Yanks top Atlanta, end skid at 5 with revamped lineup
Lennon: Yanks need to get more out of Taillon, Kluber
Knicks step up in playoff chase, beating Hornets for 7th straight win
With loss to Isles, Rangers stumble in playoff race
Islanders raise their game to rout Rangers
Didn’t find what you were looking for?