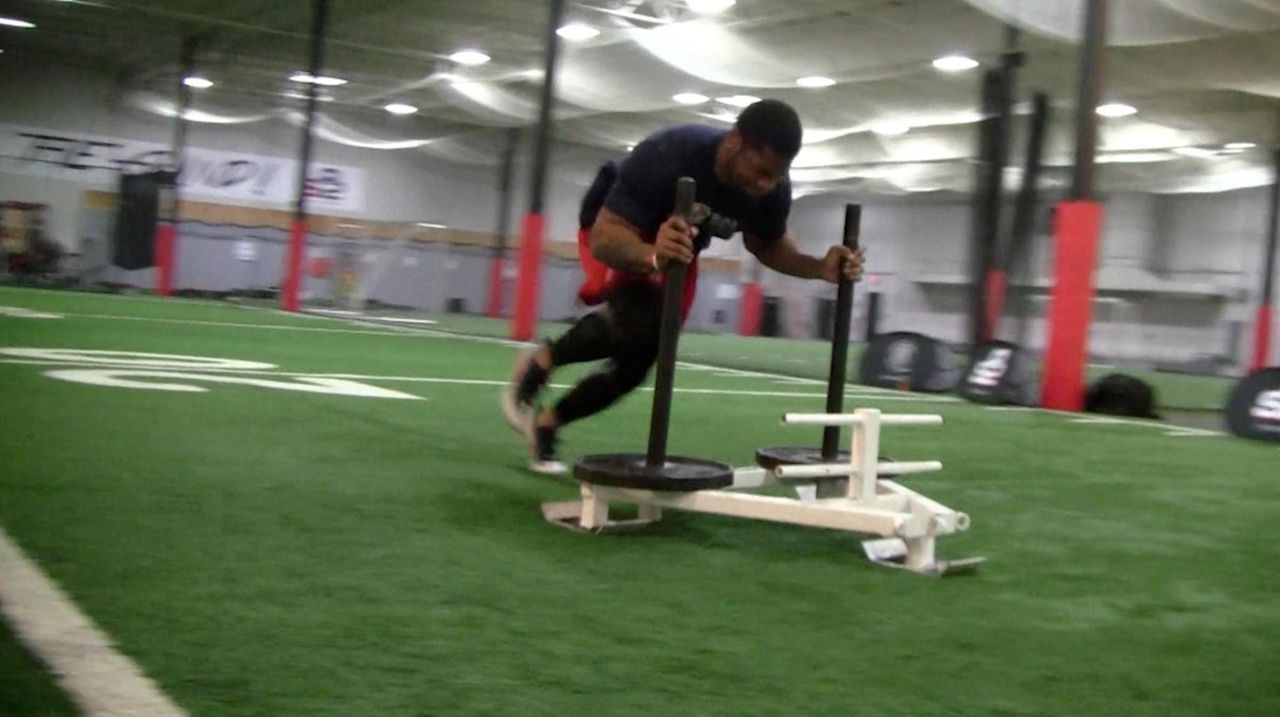 Bellport's Jordan Gowins, who played football at St. Anthony's High School and Stony Brook University, is training to get ready for his NFL pro day.  Gowins says his motivation to make the NFL isn't about fame but providing for his family. Credit: Patrick McCarthy

WAYNE, N.J. — Jordan Gowins sets his feet, nudging the front of his gold cleats up against the white line painted onto the artificial turf, and inhales deeply. He carefully gauges his precise movements from this stationary position. He slides his right foot back a few inches so the toe is parallel to the arch of the left. Then the left foot steps back, measured against the right. He bends over so his hands touch the ground, stretches out as far as his frame will take him, then reels his upper body back to that white line in a backward crawl. He finds his balance, raises his left arm behind him, holds the pose for a fraction of a moment, and then . . .

Boom! He’s off. Another rep in the 40-yard dash among the hundreds he’s running to prepare for his pro day on Wednesday.

Gowins has made a name for himself as a football player on Long Island. He won the Hansen Award as the top performer in Suffolk County in 2013 when he was a junior at St. Anthony’s High School. He spent a year at Boston College and then played three seasons at running back for Stony Brook, scoring 16 touchdowns and averaging 4.9 yards per carry. He was named second-team All-CAA as a senior this past fall, rushing for 995 punishing yards on 173 carries.

Now, though, he’s looking for a bigger stage. He’s looking toward the NFL. It’s there, he believes, at the end of those 40 yards of turf he has to cover as fast as he ever has in his life.

He certainly looks the part, with rippling leg muscles and a thick upper body.

But 40 yards is a long way to run when you are training two to three times a day, six times a week, in New Jersey. When you are having a pro day in front of scouts at an indoor sports facility in Coram that usually hosts birthday parties and rec leagues. When you come from a college that has never had a player drafted and only a handful who have made it to active rosters.

And Gowins will be carrying a lot with him as he makes that sprint of destiny. Along those 40 yards, in those four or so seconds it will take him to negotiate it, he’ll be focused on the task but have plenty on his mind.

Maybe in the first 10 yards, he’ll think about the football. About all the work he has put into this day and this event that will open eyes in the pro ranks.

“I just want to shock people,” he said.

And he may do just that. He’s been running the 40 in the low 4.4s, sometimes reaching the high 4.3s. That’s fast, but he thinks he can go faster. He’s aiming for the low 4.3s on Wednesday.

That such a time is even in the conversation for a running back who will weigh in at about 240 pounds is almost unheard of. Last year Saquon Barkley dazzled scouts at the NFL Scouting Combine when he ran a 4.40 at 233 pounds. Gowins may wind up bigger and faster than that.

Stronger, maybe, too. He has topped out at 27 reps on the bench press, but he’s been training only while seeing how many lifts he can make on a single breath. He thinks he can squeeze out another 10 if he’s given a chance to inhale and exhale along the way.

Barkley, by the way, put up 29 reps at his combine.

“The goal is to put in the scouts’ minds that I’m a similar build and I can bring similar attributes to the field,” he said of comparisons to Giants running back Barkley, who was named NFL offensive rookie of the year.

He’s already been invited to the Giants’ workout for local prospects next weekend. A blazing time at his pro day could result in more invitations to visit with NFL teams in more intimate settings.

The start is now behind him. The burst that scouts will be looking for. But the drill isn’t over, not by a long shot. Maybe in the second 10 yards, he’ll think about the obstacles he overcame just to be afforded this opportunity.

When he was 10 years old, he jumped into a friend’s swimming pool in Bellport and lost consciousness. He was a good swimmer, but he doesn’t know if he banged his head on the side or the bottom or if the impact with the water knocked him out. All he knows is what he’s been told, that he was under water for 4 1⁄2 minutes, dragged out by his friend’s older brother, airlifted to the hospital and given a 50-50 chance of surviving.

“The odds of me ever playing football again from that point on were really very slim,” he said. “My mom had talked to doctors over and over again and it just didn’t seem like it would be something that would be realistic for me. I had to learn how to walk again, learn how to write and talk again. It was like being a baby all over again.”

He doesn’t have any childhood memories before the accident. It’s as if his brain was wiped clean. A decade gone from his life.

He doesn’t talk about that a lot. Stony Brook wide receiver Julius Wingate, Gowins’ teammate and roommate for the past several years, is training with him in New Jersey these days. He had no idea about the trauma until Gowins told him this past week.

Gowins hasn’t told any of the NFL teams he’s already spoken with about the incident, either, but he thinks he will start to do that soon. Open up about it. Give people a better idea of what makes him him.

The past nine weeks of alone time in the hotel room in New Jersey between training sessions have allowed him to do a lot of self-reflection and given him time to ponder how and why he’s gotten to this point in his life. His memories begin when he came up from that water. In a lot of ways, so did his life.

“It’s something that’s behind me and I don’t need any pity for it because I got here by not getting any pity from it,” he said. “Honestly, I feel like it’s the reason why I’m here. Some people need that huge obstacle in their life to get to where they are, and I think that’s a big reason I am who I am.”

Halfway done. Twenty yards down, twenty to go. Maybe now he’ll start to think about Bellport, where he was raised on the South Shore of Long Island. About being a role model for his community.

“I grew up seeing caution tape, I grew up seeing killings and all this other stuff,’’ he said. “Troubled kids. Even just to get here is big because it motivates kids, it shows them they can get out of what we come from. Because not many people do it. I probably can’t name five people on my hand who have come out of Bellport and actually made it, so that’s another driving factor for me.”

Almost there. The final 10 yards. Those elephant thighs of his are swollen and burning, the chiseled arms swinging. And maybe at this point he’ll catch a glimpse out of the corner of his eye of his family standing off to the side.

Maybe he’ll notice the woman with the cane and the limp who, if she’s having a good enough day, has come to watch him run these drills. It’s his mother, Patrina Cousin. If Gowins needs any fuel to conquer these last few strides, he’s found it.

Cousin has had health issues for a number of years, Gowins said. She was diagnosed with a Chiari malformation a few years ago, which means part of her brain pushed into space that should be occupied by her spinal cord. She had surgery about two years ago to alleviate some of the pressure, but she still has symptoms. Seizures. That leg that was never quite the same after brain surgery.

She’s one of the big reasons he left Boston College after a year and transferred to Stony Brook. He wanted to be close to her and the rest of his family. “It didn’t feel right,” he said of being so far away.

There was a time when Gowins didn’t think she’d make it this far — when he was racing not to impress scouts but to make it to the NFL before she died so she could see him wearing a pro uniform. Even if it was just for a rookie minicamp tryout, even if just for a training camp practice, even if just for a preseason game, he wanted her to see that.

Now he wants to get to the NFL to help her. The money he could make in the league, he said, would go toward putting her in front of doctors who might be able to treat her disease and not just prescribe pills to mask her symptoms. The platform he might have, he hopes, will draw attention to the rare disease and maybe open new doors.

“I’m motivated by taking care of my family,” he said. “That’s been a big part of me training past my limits. At the end of the day, money is not going to be enough of a motive to keep going and keep pressing. I don’t look at it as trying to earn a contract, I look at it as giving my family a better opportunity and a better life.”

And that will be that. He’ll cross the finish line. Scouts will look at their stopwatches and write down the number. Maybe they’ll be impressed, but they won’t show it.

Gowins will slow down and come to a stop, put his hands on his hips, turn around and look back at the path he just traversed. Forty yards.