MINNEAPOLIS — For more than two centuries, the most significant date in Philadelphia’s history has been the Fourth of July.

From now on, it will be the Fourth of February.

For generations to come, that spot on the calendar will be remembered as the day when the sports-crazed city finally reached the pinnacle of modern professional football and its beloved Eagles won the Super Bowl for the first time. The town has had many significant sporting events and even produced a handful of champions, both team and individual, real and fictitious, in the past 57 years. But winning the NFL’s title for the first time since 1960 undoubtedly topped them all.

The fashion in which they did it — with a brashness and attitude and confidence that exemplifies their home and their fans — in a 41-33 win over the favored Patriots at U.S. Bank Stadium in Super Bowl LII will go down as one of the sport’s most impressive performances.

Backup quarterback Nick Foles, named MVP, threw for three touchdowns and caught — yes, caught — a fourth to outduel Tom Brady in the most prolific offensive game in Super Bowl history. Second-year coach Doug Pederson never blinked against Bill Belichick, maintaining his aggressive offensive attitude in the game’s most critical moments. And a defense that looked as if it had forgotten how to play for most of the game came up with a key turnover with 2:09 remaining and withstood a 51-yard Hail Mary attempt as time expired.

“I felt calm,” said Foles (28-for-43, 373 yards). “We have such a great group of guys, such a great coaching staff. We felt confident coming in and just went out and played football.”

The Lombardi Trophy will arrive Monday when the team returns from Minnesota. From now on, it couldn’t be a more iconic metallic emblem for Philadelphia if it had a large crack running through it.

“For Eagles fans everywhere,” team owner Jeffrey Lurie said, “this is for them.”

The Patriots lost a Super Bowl for a record fifth time amid speculation that the reign of Belichick and Brady is fracturing and could be coming to an end. Brady said before the game that he plans to return for the 2018 season, but the franchise undoubtedly will go through a transition this offseason with the anticipated loss of its top two coordinators, Josh McDaniels and Matt Patricia. 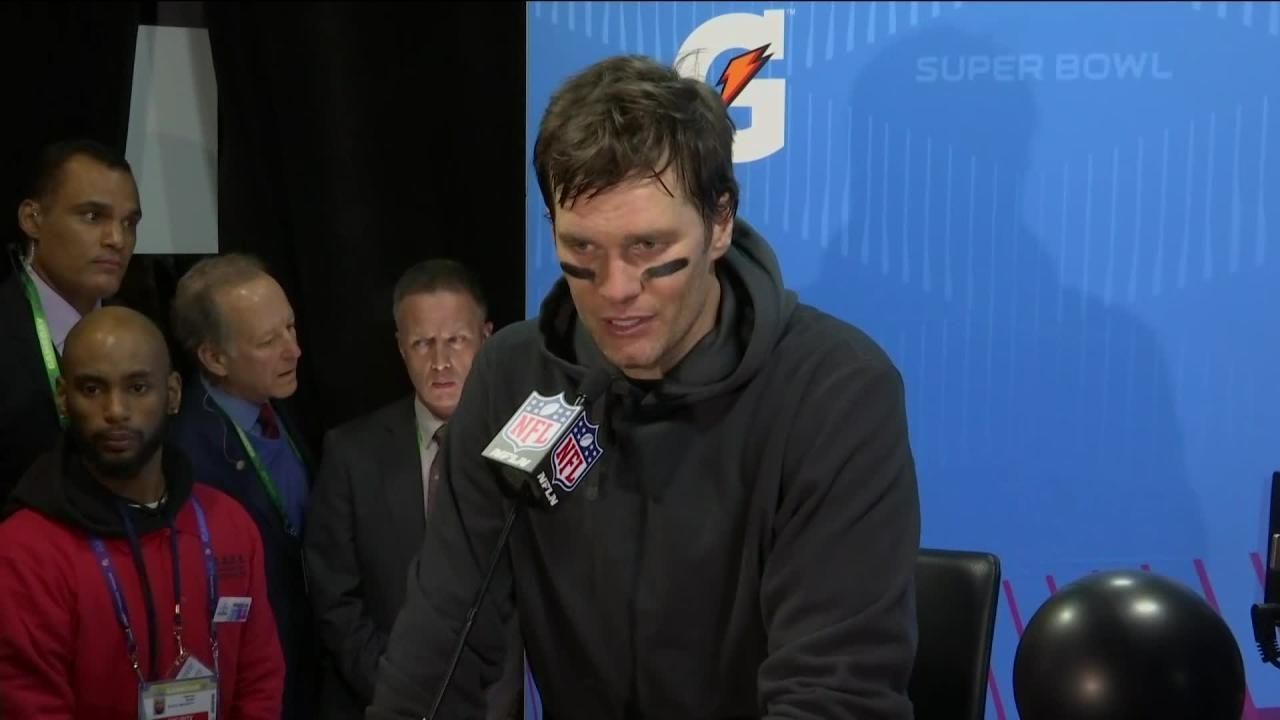 Brady: 'We obviously didn't get the job done' New England Patriots Quarterback Tom Brady said the Philadelphia Eagles made a good play when he was strip-sacked in the fourth quarter of the Super Bowl. Brady threw for a postseason record 505 yards and three TDs but the Eagles won 41-33. Credit: THE ASSOCIATED PRESS

Both offenses took a page out of Minneapolis native Prince’s songbook: They went crazy, they went nuts. They totaled 1,151 yards — not just a Super Bowl record but a record for any NFL game — and 74 points, the second most in Super Bowl history. They were so prolific that they set the record for combined yards before the third quarter was over. The previous Super Bowl mark was 929, set by Washington (602) and Denver in 1988. These guys had 962 heading into the fourth.

The Patriots trailed most of the game — what else is new? — and took their first lead with 9:22 left in the fourth when Brady (28-for-48 for a Super Bowl-record 505 yards) hit Rob Gronkowski for a 4-yard touchdown. The tight end jumped over cornerback Ronald Darby in the end zone for his second score of the second half, and the extra point gave New England a 33-32 advantage.

The Eagles faced fourth-and-1 on the ensuing drive from their own 45 with just under six minutes left, but Pederson refused to punt. Foles hit tight end Zach Ertz for 2 yards to convert the first down and later hit Ertz for an 11-yard touchdown on third-and-7. Ertz caught the ball and dived for the end zone, momentarily losing control of it as he landed. The play was reviewed and confirmed as a touchdown because Ertz had established himself as a runner after securing the catch.

“If they would have overturned that,” Ertz said, “I don’t know what would have happened to the city of Philadelphia.”

A failed two-point attempt left the Eagles clinging to a 38-33 lead and kicking off to Brady with 2:21 left, but two plays into the drive, Brandon Graham registered the first sack of the game for either team. He also punched the ball out of Brady’s grip, and it floated into the hands of Derek Barnett for a fumble recovery with 2:09 left. The Eagles converted that into a 46-yard field goal to go up 41-33 with 1:05 left, but it still was a one-possession game.

The Patriots were in need of a touchdown on the final play, and Brady launched a long pass to the end zone. Gronkowski and Danny Amendola both were around the ball, but the Eagles knocked it down, triggering a green and white confetti storm.

“I just wanted it to be on the ground and I wanted to see the clock go to zero,” Pederson said of his thoughts with the ball in the air. “Not only do we have the best fans in the world, we now have the best team in the world.”

For the first time in what seemed like forever, that’s something Philadelphia can rightfully claim.

Watch: Eagles fans react to Super Bowl LII victoryFans took to social media during and after Super Bowl LII between the New England Patriots and the Philadelphia Eagles.