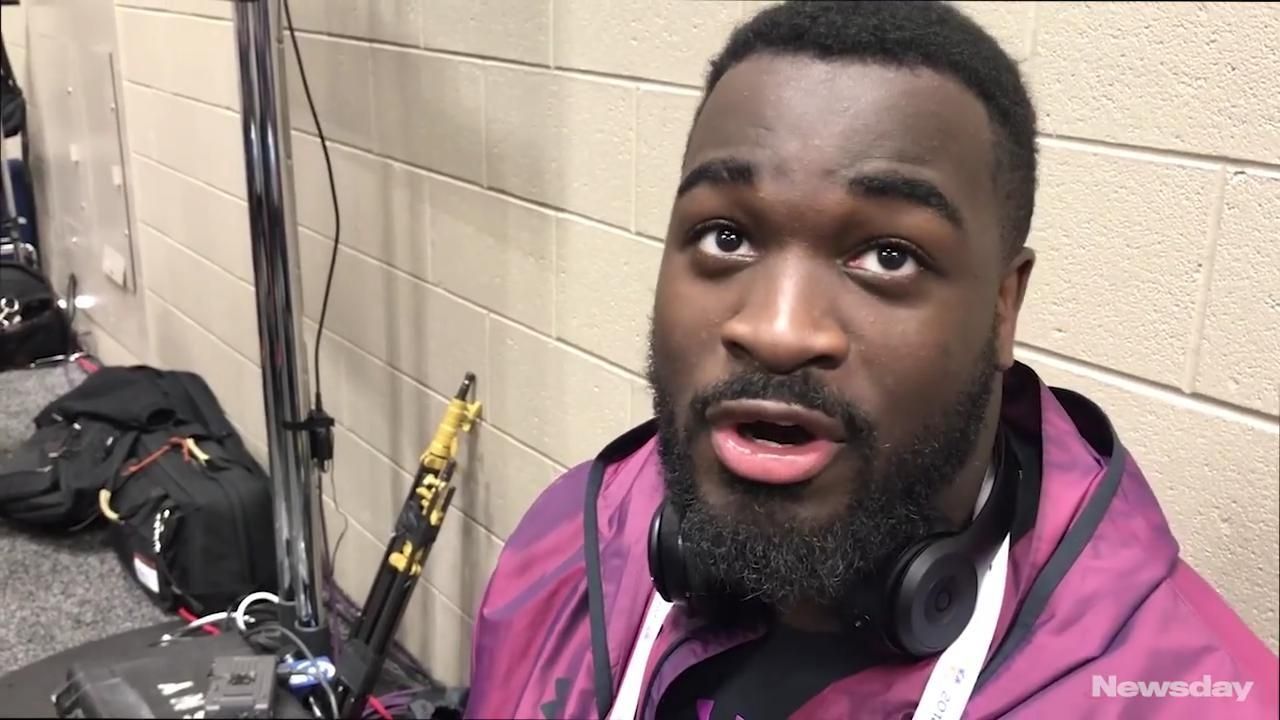 INDIANAPOLIS — Timon Parris grew up on Long Island and attended Floral Park High School, but he was not a Giants fan or a Jets fan. He was, in fact, an Eagles fan.

So this already has been an exciting last few months of NFL action for him.

It may be about to become even more thrilling.

Parris, who played at Stony Brook University, is at the NFL Combine this week hoping to make enough of an impression on teams to be drafted at the end of April (and thus likely end his Eagles fandom, unless he hits on that 1-in-32 chance to play for them). Because of a fractured ankle he suffered in the fall, he is unable to participate in any of the drills on the field, but he did take a crack at the bench press — 27 reps’ worth. He’s mostly here to interview with the teams and get a feel for what the NFL is all about. Many of the players here had that opportunity at events like the Senior Bowl or the Shrine Game or other all-star type situations. Parris, though, could not attend those because of his injury so this is his first real taste of pro football.

“Now I get to see some of the competition, some of the people I’m going to be playing with or playing against,” he said on Thursday. “I’m just enjoying the atmosphere and the grind, the early mornings and late nights, meeting with teams, getting a feel for everything the NFL has to offer.”

He’s also had MRIs and tests done on his ankle by the teams.

“I’m coming along nicely,” he said of the rehab. “It’s feeling good. I’m not doing anything at the Combine on the field but I’m healing nicely.”

He hopes to be able to participate in drills at Stony Brook’s Pro Day on March 29.

He’s not the first Stony Brook player to come to the Combine. That honor was held by linebacker Victor Ochi two years ago. Parris said he spoke with Ochi for about an hour to get a better idea on what to expect here.

“Me and him, we went up against each other a lot,” Parris said. “He was telling me to enjoy the experience and to tell the teams how hard I work, how I came from being a walk-on to a scholarship to an All-American and now I’m at the Combine. My whole journey from then to now and how I can still elevate my game to get to an even higher level.”

High enough, many believe, to be the first Stony Brook player drafted in the NFL.

“That’s the ultimate goal,” he said, noting that it will be another two months until he can realize it. “I’m just going to take it day by day and enjoy the whole process.”

LI’s Senat hopes hoops history helps at CombineINDIANAPOLIS — The players here at the NFL Combine are, by nature, very competitive. They ... Elmont natives give NFL Combine a local flavorGreg Senat and Timon Parris, on the verge of reaching the pinnacle of football, took ... Pro sports draftees from Long IslandA look at every Long Island high school player that has been drafted by an MLB, NFL, AFL, NHL, NBA or WNBA team. NFL mock draft 5.0Who goes where and when? See Klopsis' latest mock.

Hicks asks out of lineup after being shaken up by latest police shooting
Another Mets game postponed, with doubleheader on Tuesday
Rangers make no moves as trade deadline passes
Sam Darnold said news of Jets wanting to trade him was 'tough'
No further moves at deadline for Lamoriello, Isles
Nets-Timberwolves postponed after police shooting
Didn’t find what you were looking for?