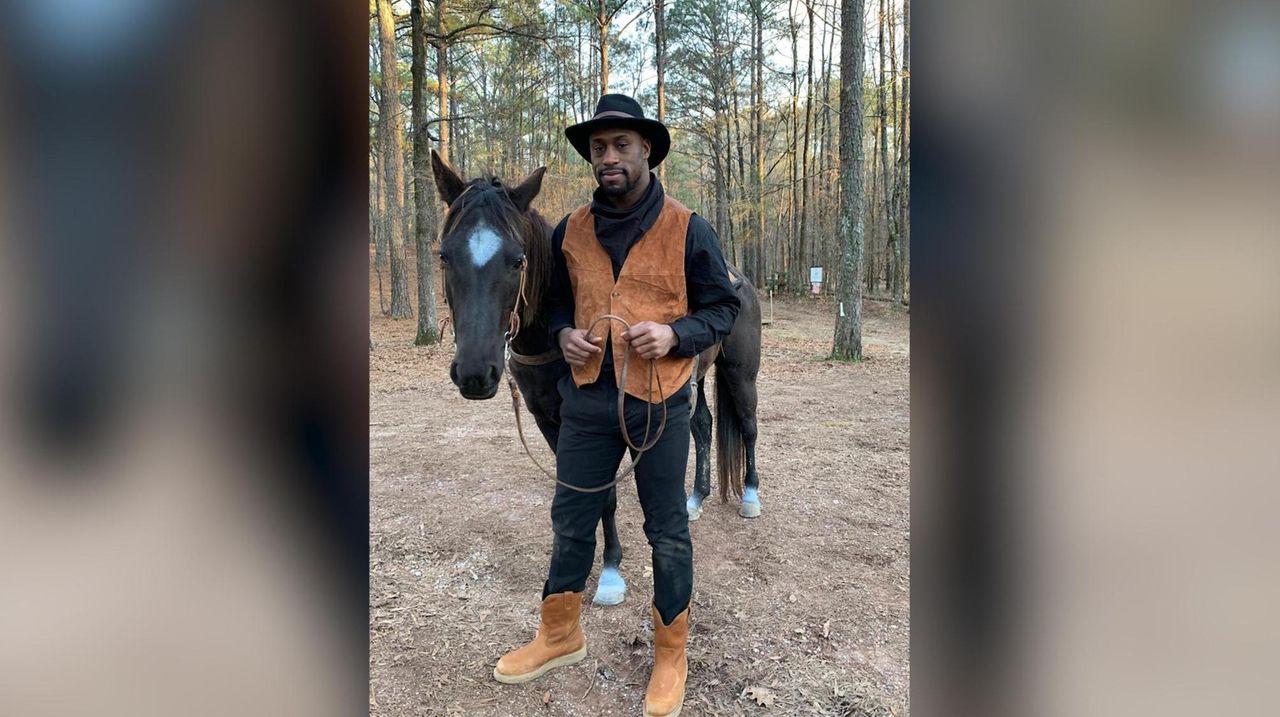 Washington Redskins tight end Vernon Davis was cast in Hell on the Border, a biopic about the first black Deputy U.S. Marshal west of the Mississippi River. Davis, who plays former slave Columbus Johnson, shot his scenes in Birmingham, Alabama, Jan. 27-30. Credit: Hell on the Border

Vernon Davis can’t wait to make his next big play.

The Redskins tight end has been preparing in earnest. He studies up on everything he needs to know, learns new tips from his co-workers and pores over the book in front of him to make sure everything is committed to memory. Once he gets out there and the cameras are focused on him, he’s consumed in the moment. Nothing else matters except giving that play 100 percent.

But this isn’t FedExField in the fall. This is Birmingham, Alabama, in late January. Davis is on the set of "Hell on the Border," a biopic about Bass Reeves, the first black Deputy U.S. Marshal west of the Mississippi River. And for the 35-year-old Davis, there are more than a few similarities between his established football career and his budding acting career.

“When you’re acting, you’re in the trailer, you’re going over your lines, you’re relaxing and laying back, getting yourself ready for the next scene,” he said. “Then once you shoot that scene, you come back to your trailer. And the way I like to think about that is if I’m getting ready for a game, or it’s the week of preparation and we’re practicing. There’s nothing like being able to lay back or just go throughout your day and you can’t wait, you can’t wait to make that next big play. You’re so geared up and you’re excited, the passion, the enthusiasm to get out there and make that big play.”

Davis plays former slave Columbus Johnson in the movie, which is directed by Wes Miller and stars Frank Grillo, David Gyasi, Ron Perlman and Zahn McClarnon. He filmed in Birmingham Jan. 27-30, about a month after completing his 13th NFL season. The film, which wrapped on Wednesday, is set to hit theaters later this year.

Davis has made cameos on TV shows before, namely on "The League" and "Inside Amy Schumer," and he appeared in the "Baywatch" movie with Dwayne “The Rock” Johnson. But "Hell on the Border" represents the biggest step so far for Davis as an actor.

“With the repetitions that I’ve been getting, it made it a lot easier for me to just go on set and do what I have to do from that standpoint,” Davis said. “But working with guys like Ron Perlman and David Gyasi was truly amazing because I was able to take away from them and learn different techniques by watching them that I can use in my own craft when it comes to acting.”

Davis even did his own stunt, a chase scene. He said he could have had a stunt double do it, but he chose to do it himself so the scene would feel as real as possible.

“In the movie, I was on the cart, being pulled by the horses, and I was so into the moment that it was just like, I didn’t care about anything else but that moment,” Davis said. “I was really living that moment as if it was actually happening . . . I was trying to make this big play in my mind, just like football. You’re in that moment, you just think about making that big play. Nothing else is on your mind.”

After filming his scenes, Davis flew to Atlanta to take part in the NFL Honors ceremony as a nominee for the Walter Payton NFL Man of the Year Award. And eight months ago, he founded his own supplement company, Timeless, which was born out of a desire to create his own tested supplements.

“I’ve always been passionate about it,” Davis said of the supplement industry. “It’s just hard when you’re tied into a company and you don’t have the flexibility to make your own products and manipulate the ingredients and create more products. So with Timeless, I can do all of that and I can give the consumer a really unique product that really works based on testing and feedback I get from friends and family and just athletes in general.”

Davis, who has 7,439 career receiving yards and 62 receiving touchdowns, has one year left on his contract, after which he said he’ll evaluate whether or not he wants to continue playing. Davis said he developed a passion for both acting and his supplement company, which will help him whenever he decides to retire, and he advises his fellow players to spend their offseason finding their own passions.