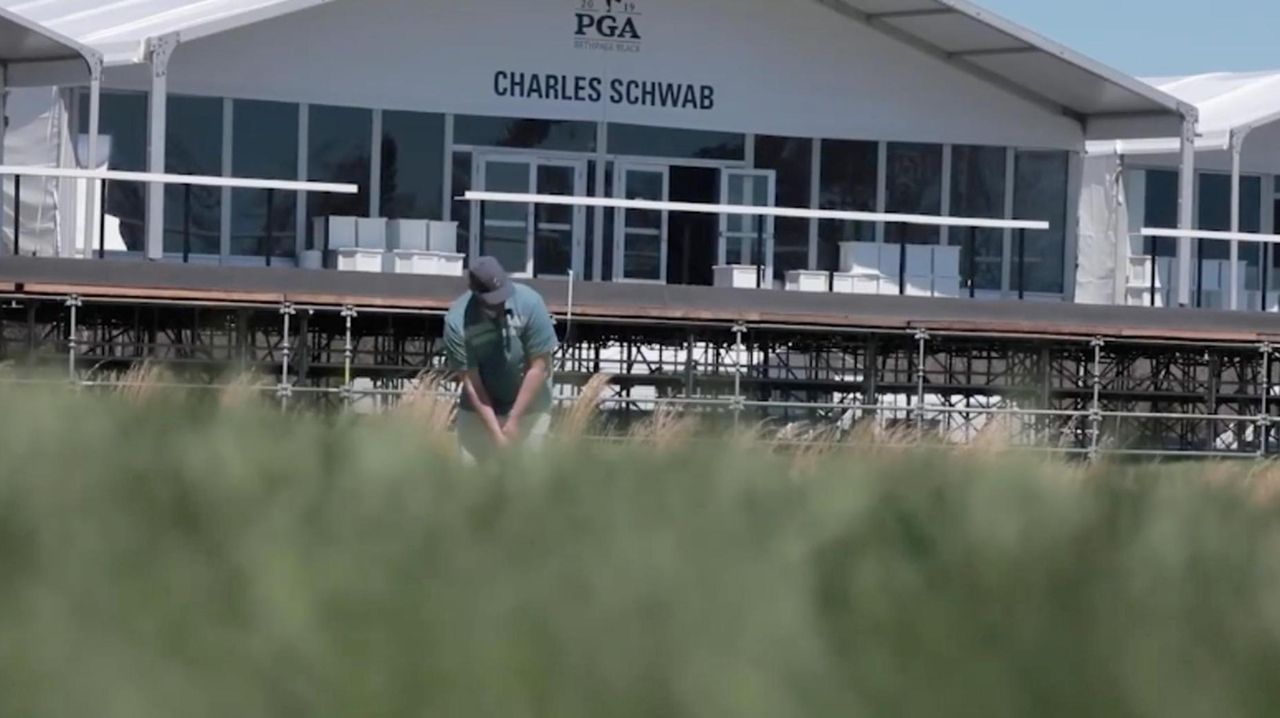 On Friday, April 17, Bethpage State Park director Elizabeth Wintenberger talked about some of the history of Bethpage State Park, which will be hosting the PGA Championship in May on its famed Black course. Although it's a world-renowned golf course that she said many consider "a true test of the game of golf," she also talked about some of the other non-golf features and family friendly amenities the park offers. Credit: Newsday / Yeong-Ung Yang

Already, the Black had developed a reputation. Newsday, in its first months of existence, previewed it by saying Snead was “anxious to gain revenge” for his close defeat earlier that September, adding, “The Black course at Bethpage is ranked as one of the toughest courses in the country and the match promises to be an excellent one.”

The New York Times reported on Sept. 30, 1940 that the event of the previous day ended by darkness in a tie. Although scores are not official or meaningful in match play, it was worth noting that Nelson shot 69, Snead bogeyed the last hole for 70 before a crowd of 3,000.

Finally, the PGA Championship itself — now stroke play, not match play — has arrived. The major tournament is expected to draw 200,000 from Monday through Sunday to a venue that has become a story in itself.

Bethpage Black is a story about golfers arriving from the Long Island Rail Road by horse-drawn carriages and golfers sleeping in their cars overnight to get an early tee time. It is about years of neglect and about a striking revival. It is about hosting tournaments run by the U.S. Golf Association, PGA Tour and now the PGA of America. And it is about the 30,000 public golfers who play it every year.

At a time when public courses all over the country are desperate for customers, the Black still honestly tells many players that they might be better off staying away. The sign affixed to the railing behind the first tee, still there during two U.S. Opens and now a third major, says, “WARNING. The Black Course Is An Extremely Difficult Course Which We Recommend Only For Highly Skilled Golfers.”

The Black Course, said by Long Island golf historian William Quirin to have been the last great work of architect A.W. Tillinghast, was and is one of a kind.

“It’s not the easiest course, but it is one of my favorites on the whole planet,” Cameron Young of Westchester, an amateur, said the day he tied the course record with a 64 in the 2017 New York State Open.

“I love it. That was my first introduction to the U.S. Open, the crowds and the noise and the New Yorkers, which I love,” Rory McIlroy said recently, recalling being a 20-year-old U.S. Open first-timer on the Black Course in 2009.

"It's pretty impressive that they can yell that loud. I know I can't, but that's impressive, the fact that you can hear them four or five holes away," Tiger Woods said during the 2002 U.S. Open, which he won wire-to-wire and which stood out for the unrestrained way Long Islanders celebrated having a major on their municipal course.

The legend of the Black goes way back to 1688 according to the book, “Golf for the People: Bethpage and the Black” by Philip Young. He cites speculation that the first round of golf ever played on this continent took place on the grounds where Bethpage State Park now stands.

More exact is the origin of the course itself. It opened on Memorial Day, 1936 (the same year Grumman established itself in Bethpage), with green fees of $1 on weekdays, $2 on weekends and holidays.

Golf had made its official debut on the property in 1923 with the privately-owned Lenox Hills Country Club. The Long Island State Park Commission leased it in 1932, a year before state parks commissioner Robert Moses convinced the legislature to buy the entire 1,368-acre parcel and make it one big park. The old Lenox Hills club became the Green course, to be followed by the Red, Blue, Black and Yellow.

Tillinghast’s design of the Black brought instant credibility, as did the stature of the park’s first head pro, Al Brosch, winner of 10 Long Island Opens, six Met PGA titles and eight Long Island PGA championships. In 1950, he became the first to shoot 60 in a PGA Tour event.

The Black fell into disrepair, though, in the 1960s and 1970s. Rocks in bunkers were numerous, grass in fairways sometimes sparse. That changed in 1982 when John Sheridan, general manager of the Long Island State Parks Commission, spearheaded a massive restoration project.

Word reached the U.S. Golf Association, which made the daring decision to hold its crown jewel, the U.S. Open, on the ultra-public facility. Bolstered by a lavish TV contract with NBC, the USGA funded a $3 million renovation. Just like that, the Black became a major destination and its image was transformed, presumably, forever.

Everything about the place is a source of interest:

Suffolk County Executive Steve Bellone, at a pre-PGA news conference with his Nassau counterpart Laura Curran recently, pointed out that the entire eighth hole and parts of 7 and 9 are actually in Suffolk.

The Nassau Players Club, an organization fully certified by the Metropolitan Golf Association despite the fact it has no pro, clubhouse or course, has played its events on the Black for 25 years.

Park officials do not know whose idea the “WARNING” sign was.

“Bethpage Black” has become a phrase synonymous with exuberant spectators (sometimes too exuberant). Patrick Reed, after winning the Barclays there in 2016, smiled and said, “If people start to heckle you, then you can try and prove them wrong. It was a lot of fun. It felt like you were almost playing football.”

But the place’s greatest distinction is this: On May 25, nine days after some pro hoists the fabled Wanamaker Trophy, the course will be open again, so anyone can sign up and play.

Location: The Black is one of five 18-hole courses at Bethpage State Park in Farmingdale, the largest public golf facility in the country.

History: Bethpage State Park was developed from an estate owned by the Yoakum family, which leased land to Lenox Hills Corporation, which built Lenox Hills Country Club on the property in 1923. The Bethpage Park Authority, created in 1933, purchased Lenox Hills Country Club, and in 1934 construction of a polo field, new clubhouse and new courses commenced as a Work Relief project. The Red, Blue and Green courses were completed in 1935, and the Black course a year later.

Restoration: In anticipation of the 2002 U.S. Open, the USGA funded a $3 million project to restore the Black course under the supervision of Rees Jones and the transformed course re-opened in June 1998.