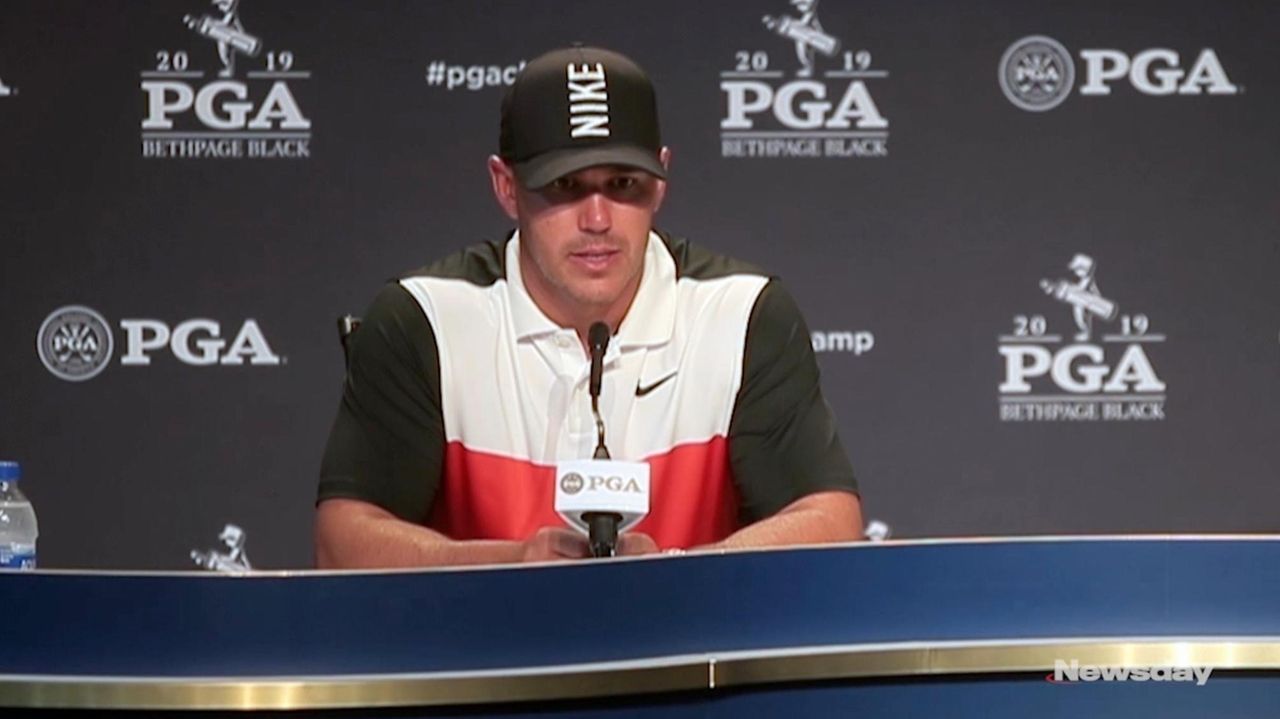 On the first day of the 2019 PGA Championship, Brooks Keopka walked off the Bethpage Black course with the new course record by shooting 63. Koepka was 7-under for the round and atop the leaderboard when he finished the day. Credit: Newsday / Raychel Brightman

It’s just the first turn of the PGA Championship horse race that began Thursday at Bethpage Black, but defending champion Brooks Koepka had the bit in his mouth and looked like Secretariat running away from the field at nearby Belmont Park. Koepka made seven birdies — none on the two par-5s — to set a competitive course record of 7-under 63 that gave him a four-stroke lead over England’s Tommy Fleetwood by the time the morning wave finished.

A lone darkhorse emerged in the afternoon when Danny Lee got it rolling with eight birdies in a 6-under-par 64 that left him as the only player within arm’s length of Koepka. Fleetwood is sole third at 3 under, Sung Kang, winner of last week’s AT&T Byron Nelson, heads a group of five players at 2 under, and world No. 1 Dustin Johnson, Bethpage fan favorite Phil Mickelson, Jason Day, Jordan Spieth and Rickie Fowler are among a crowd of eight at 1 under.

When the day began, most eyes were focused on Koepka’s playing partner, Masters champion Tiger Woods, but Koepka is beginning to look as intimidating as a young Woods once did. He has won three of the past eight major championships and was second to Woods in April at Augusta.

Woods, who struggled to a 2-over-par 72, was suitably impressed. “He hit a couple loose tee shots today that ended up in good spots, but I think that was probably the highest score he could have shot today,” Woods said. “He left a few out there with a couple putts he missed.”

The ever-taciturn Koepka smiled when Woods’ comment was relayed to him. “I didn’t birdie any of the par-5s,” Koepka said. “That was disappointing because you know those are holes you should be able to birdie. Then on No. 2 today, my 11th hole, I missed about a five-footer. That would have been nice to shoot 60.”

The previous record of 64 was set by 2007 New York State Open champion Craig Thomas and tied by 2009 U.S. Open winner Lucas Glover and by Padraig Harrington in the 2012 Barclays playoff event, Kang in the 2016 Barclays and amateur Cameron Young in the 2017 New York State Open. Koepka broke it when he holed a putt of 33 feet at the 474-yard par-4 ninth hole, which was his 18th.

Asked what he was thinking, Koepka said, “Nothing. Just make it. I feel very comfortable with the putter after a couple changes we made and very pleased with the way I putted today.”

Koepka’s seven birdie putts totaled 131 feet. When asked if there was a shot that defined his round, he pointed to the one that kick-started it — a 40-foot birdie putt on his opening hole, the brutally difficult 489-yard par-4 10th.

“It’s not a birdie hole,” Koepka said. “I hit it a bit hard. It was probably going about eight, nine feet by. So, for that to kind of sneak in, I thought that was very big…But I never thought about the course record or anything. I was just trying to shoot the best I could.”

Koepka’s 63 was the 37th ever in a major championship, trailing only the record 62 by South African Branden Grace at the 2017 British Open, and he became only the third player after Greg Norman and Vijay Singh to do it twice.

Asked how he approached his afternoon round with Koepka so far in front, Lee said, “Well, I wasn’t surprised when Brooks shot 7 under this morning. I mean, have you seen him playing U.S. Opens and PGA Championships the last three years? But it didn’t change my game plan at all. My mindset was honestly some kind of under-par round would be good, but I did a lot better than that and I was very pleased with it.”

Graeme McDowell, the 2010 U.S. Open champion who finished at even-par 70, said Koepka is verging on dominant.

“He seems to relish the big-time stages, and going out there with Tiger this morning, a lesser man would have wilted,” McDowell said. “That guy has something special, and I’m really impressed by him…He’s the best young player on the planet. No question. He’s the best.”

It’s just one round, but there’s a lot of ground to make up for everyone but Lee. “No lead is really safe here,” said Fowler, who began with double-bogey at No. 10 but got back to red numbers. “You can make bogeys and doubles out here very quickly…But obviously, that’s great golf today. So, we’ll go look at that 63 and see if we can chase down Brooks and have some fun.”

1:43
Yankees still looking for a spark as slow start to season continues
German sent to alternate site after Yankees fall to Rays again
Lennon: Support is not a two-way street for deGrom and Mets
Logan: Marks deserves recognition, not scorn, for assembling elite roster
Judge back in lineup after missing two games
Johnson impresses Nash, but will he stay with Nets beyond Sunday?
Didn’t find what you were looking for?