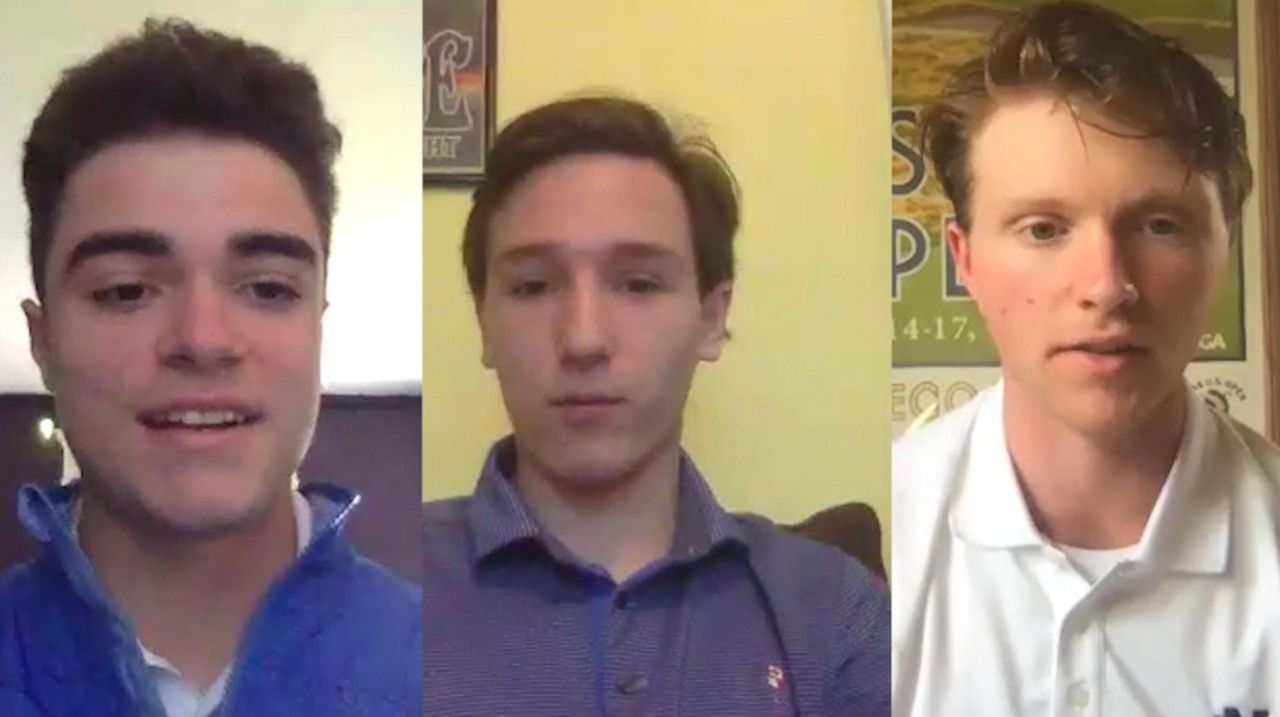 Three Long Island teens have been awarded the super competitive Long Island Evans Scholarship for golf caddies that funds four years of tuition and room and board. Credit: Newsday

Some kids spend the summer serving ice cream for extra cash. Others choose to carry golf bags to earn pocket money. Luckily for the parents of three Long Island teens, they chose clubs over cones.

David Ouellette of Baldwin, Camden Sisler of Wading River and Brigham Hancock of Southampton are this year’s recipients of the Long Island Evans Scholarship for caddies, earning them a full ride and housing at prestigious universities.

Evans scholars live in on-campus houses paid for by a foundation set up by the Western Golf Association. Recipients are chosen for their work habits at their clubs, academic performance, financial need, essays and an interview with a panel of 70 to 80 people. The average scholarship is worth $120,000.

"I can’t even put it into words," said Ouellette, who recently graduated from Long Island Lutheran Middle and Senior High School in Glen Head and will attend The Ohio State University in the fall. "It was the most exciting and relieving feeling."

Winners don’t have to caddy during the school year but must resume the work on summer break.

More than 11,000 students have graduated from four-year universities — including Purdue University, Michigan State University, Notre Dame and Penn State — with the help of an Evans scholarship since the program began in 1930. The program received a record 820 applications this year and awarded 285 scholarships.

Among this year’s scholarship winners, 40% are first-generation college students, 37% are minorities and 30% are female.

Promoting diversity among caddies — who up until the mid-20th century were almost entirely black — is a priority for the program, said Mike Maher, vice president of Caddies and Scholarships for the Western Golf Association.

The organization offers a caddie academy program aimed at youths from disadvantaged economic backgrounds who do not live near a golf course. Eighty of those students, 90% of whom are Black or Latino, have gone on to win Evans scholarships, he said.

"Promoting diversity within the caddie yards [the area where caddies wait for work], the Evans Scholars Program and the broader game of golf is a priority for us, and we’re working hard to grow these numbers each year," Maher said. "We feel caddie yards are experiencing more diversity nationwide because life-changing opportunities like the Evans Scholarship are available."

Golf has been a three-time bearer of good fortune for the Ouellette family of Baldwin.

George Ouellette Sr., an alumnus of New York University and its golf team, put three boys through private high school while working as the director of outside operations at Garden City Golf Club. There his sons took on caddy jobs and learned to love the game.

In 2016 his middle son, George Jr., lifted a huge financial burden off the Ouellettes when he was awarded an Evans scholarship. George Jr. graduated from the University of Colorado this past spring with a degree in business.

Now their youngest will receive a full ride to The Ohio State University, where he plans to pursue a business degree and will join the Buckeyes' fencing team.

"One, we were already so grateful that my brother had gotten it, [and then] to find out we got a second one," said Ouellette, 18, who recently graduated from Long Island Lutheran Middle and High School in Glen Head. "My parents were unbelievably happy about it. Super proud; it took so much weight off their shoulders."

The time management skills and work ethic he honed as a fencer translated on the course, where a young caddy has to put in time to build a reputation. A caddy has to learn how to spend four hours with a stranger if he or she wants to be good at the job.

"I feel that since I have started caddying my speaking skills and my interaction skills have gone up immensely," Ouellette said.

George Jr. said the scholarship broadened his own horizons by transplanting him to the American West. Living in the on-campus Evans house for four years, he made friendships he suspects will last a lifetime. It will likely do the same for his brother, he said.

"It got me out of my shell," George Jr. said of the experience. "It brought me to a whole new place in Boulder that I had never seen before. I was able to meet people from all different walks of life."

The Ouellettes recommend other caddies seek out the scholarship.

"It doesn’t hurt to apply even if you think you can’t get it," Ouelette said.

Caddying at the prestigious Shinnecock Hills Golf Club in Southampton can be a tough task for a shy 14-year-old working his first summer job.

You’re competing for loops, or golf rounds, with adult caddies who make their living on the course, having spent years learning to read the putting greens and measure the distance from hazards, which are obstacles like ponds or sand traps. And then there is the social aspect, learning to interact with titans of industry who call the nearly 130-year-old golf club home.

But Brigham Hancock, of Southampton, rose to that challenge, working the job for four summers.

Hancock, 17, the son of two elementary school teachers and older brother to two sisters, will head in the fall to the University of Notre Dame in Indiana, where he will pursue a business degree. His family, he said, is predictably thrilled about his scholarship.

"I was skiing with my dad and I knew halfway through our vacation this [the acceptance letter] was waiting in the mail," he said. "The first thing I saw was that nice gold envelope. I opened it up and it said ‘Congratulations.’ It was really one of the great moments of my life."

Hancock learned of the award via a flyer hanging up at work.

Hancock, who graduated from Southampton High School in June, said that to become good at his caddy job, he had to learn his way around the notoriously difficult course — the site of several U.S. Open golf championships, most recently in 2018 — and around the players.

That entailed "learning how to actually have conversations with these people," he said. "Understanding how they were feeling based on body language and how they were talking. It really helped for me to become more intuitive on how to form better relationships with people."

Greg Gagliardo manages the caddy program at Shinnecock Hills and wrote a letter of recommendation for Hancock’s application. Gagliardo said he gives local youth a shot at a caddy job because he knows what those connections could mean for their future. But they must prove themselves, as most members expect a competent caddy to help find a ball in the rough or help decide which club to use.

"If you have a great caddy, it enhances your experience," Gagliardo said. "If you get off on the wrong foot, it sours the whole round."

Camden Sisler is fully aware of the doors that can open from time spent on the fairway.

The Shoreham-Wading River High School graduate has spent the past four years working at the exclusive Friar’s Head in Riverhead, a private club that golf great Phil Mickelson has said is his favorite. The people Sisler, 17, has met there have advised him on things like stocks, making connections in business and in selecting Northwestern University in Illinois for his undergraduate experience. He begins there this fall and will study economics and cognitive science, with an eye toward artificial intelligence.

"I’m not sure what I want to do, but I am going to use the golf course to network and put myself out there," he said. "And hopefully go from caddying to a bunch of internships to hopefully some great career paths."

Friar’s Head is an old-fashioned club without yardage markers or signs that dictate how long a hole is. That elevates the role of the caddy, who then must fill in the blanks for the players. But it means the learning curve to become a good one is steep.

"When I started there I’d sit for like 14 hours with no work, no pay" said Sisler, who began caddying the summer before his sophomore year.

He said he quickly realized that knowledge and people skills would make him successful on the course, a revelation that, of course, applies to life.

"The biggest thing is just communication and common etiquette," Sisler said. "Just knowing where to stand, knowing how to communicate with people. Whether it be just about caddying, golf, life, work — whatever it is."

It wasn’t just the golf course that aided his character development. Sisler was a well-rounded student who graduated with a weighted GPA above 100, and he also maintained a part-time job at a local butcher, started a paintball team, played guitar and competed on his school’s track and field team.

Besides the three Long Island Evans Scholarship recipients — David Ouellette, Camden Sisler and Brigham Hancock — who interviewed at the New York City selection meeting in February, there is another finalist from a Long Island golf club who has already matriculated and been awarded a three-year version of the scholarship, valued at $90,000.

Taylor Kong, 19, caddied at Wheatley Hills Golf Club. He is from Roslyn Heights and attends Purdue University in Indiana, where he is a sophomore.

According to a newsletter from the golf club, Kong, a graduate of Herricks High School in New Hyde Park, is the first caddie at Wheatley Hills to get the scholarship.

At Purdue, Kong will live in a scholarship house with 45 other Evans Scholars recipients from around the country. He plans to become a doctor, inspired to join the medical field after the 2014 death of his sister, Ashley, from cancer.

“I want to thank the members at Wheatley Hills Golf Club, Jamie, and Andrew for all you have done for me,” Kong said in the club’s newsletter. “I’ve enjoyed the opportunity to be a caddie at Wheatley Hills and I am grateful for the many friends and the support of the club as I pursue my college education.”