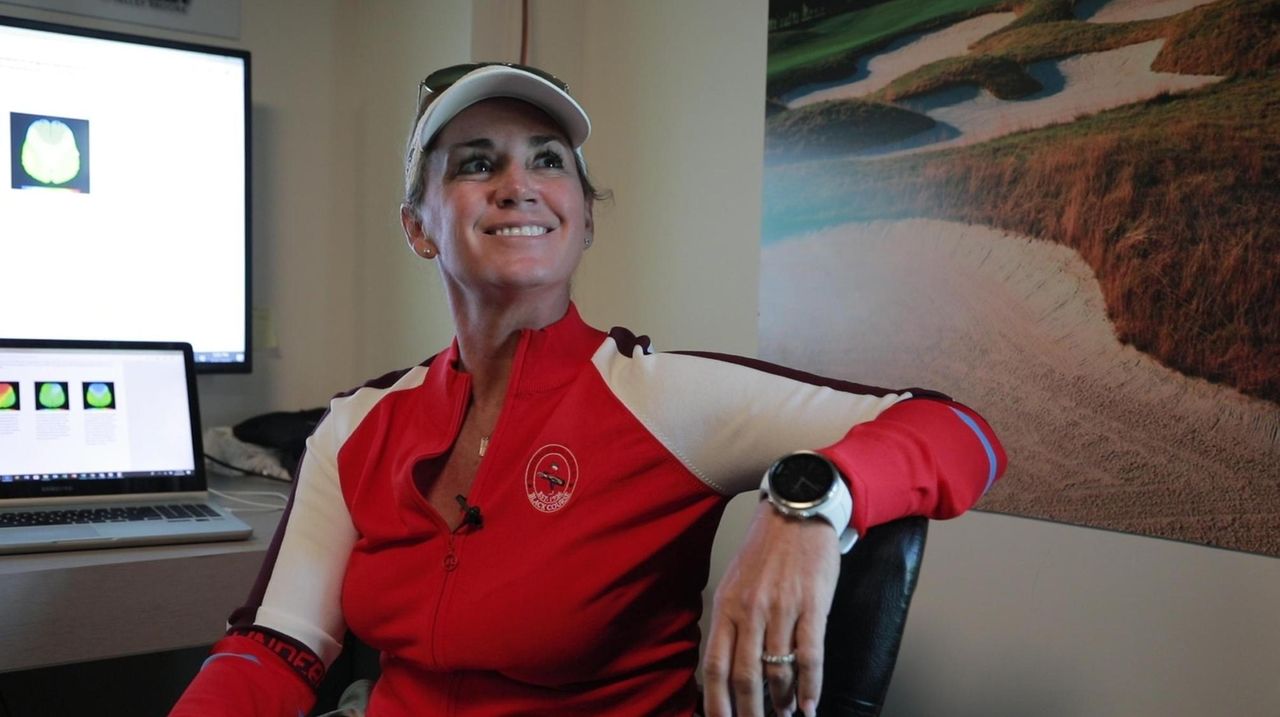 Kelley Brooke is the Bethpage State Park director of golf. On Friday, April 17, she talked about her love of the sport and how she helps it reach a new audience through innovative programs aimed at both kids and adults. Credit: Newsday / Yeong-Ung Yang

Soon after Kelley Brooke was born her mother, the city champion of Bettendorf, Iowa, put a putter in her crib.

“I think I was destined to be a golf pro,” Brooke said.

Her destiny reaches a crescendo  when the PGA Championship begins at Bethpage Black on Thursday. That’s because Brooke is the first female director of golf at a major championship site.

Though she won’t be there this week.

She fulfilled a dream by qualifying for the U.S. Senior Women’s Open at the Pine Needles Resort at Southern Pines, North Carolina, which begins on Thursday.

Her first Open prevents her from being in an ambassadorial role at Bethpage for the PGA. “It’s unfortunate, it’s terrible it has to happen on the same week, but who knows if I will ever qualify for this again. It’s a hard decision and I chose to take the opportunity to play myself.”

Brooke arrived to work at the five-course Bethpage facility in January of 2018 after winning a management contract from New York State in a bidding competition that included 10 male-owned management companies and the PGA Tour.

After deciding that the life of a touring professional wasn’t for her, Brooke became a teaching pro in New Jersey in 1993 before moving to the Staten Island Golf Center.

“I was giving 110 lessons a week and getting burned out on lessons,” she said.  ”I wanted to be more on the management side. I developed programs for children with special needs, ladies and juniors in general. I built a background in programming that is what allowed me to win that first contract in Brooklyn.”

In 2004 she won a contract to manage the Brooklyn Golf Center driving range and in 2006 the Jacob Riis Golf Course in Rockaway Park, Queens. That was followed by the Alley Pond Golf Center in Little Neck, Queens, and the Randalls Island Golf Center.

It was a journey that built the foundation for the job at Bethpage where she has a 20-year contract and big plans.

"We spent the last year building programs. We started a junior program this spring and we already have 58 kids,” Brooke said. “We are partnering with the LPGA Amateur Association, formerly known as EWGA, and this is biggest chapter in all the country with more than 550 women. We are partnering to do programs with them.”

She also has big plans for the small practice range. “We are going to build a performance center. We are going to tear the range apart, move it back so you can hit drivers,” Brooke said. “We are going to have indoor-outdoor stalls, probably start construction the fall of 2020. Going to have a gym, a therapy room, classrooms, simulators, synthetic putting green. We plan to finish in spring of 2021. We’ll have a short game area. All of this is subject to state approval.”

For her career efforts, Brooke was named club professional of the year for 2018 by the LPGA Teaching and Club Professional membership.

“With Tiger’s resurgence the interest in golf is going up again,” she said. “Golf is really based on what Tiger’s doing. It’s crazy that one man can have such power over golf.”

In just over a year at the helm of what she calls “the people’s country club,” Brooke has found the experience entrancing.

“It’s been fabulous,” she said. “It’s literally been magical. This place has such history and everyone regards it as one of the best courses in America. Everyone, for me, as a female, everyone has been welcoming. I spend seven days a week here and it feels like I’m disappointed at the end of the day when I have to go home.”

In the end, his teammates will long remember Gillies' humanity
Czarnik to get second look on Barzal's line
Maloney remembers Gillies as heart and soul of Isles' dynasty
Cooks comes off bench to propel Hofstra past Northeastern
Reddish's debut may be Knicks' diversion from tailspin
It's a whole new ballgame when it comes to getting into Hall
Didn’t find what you were looking for?