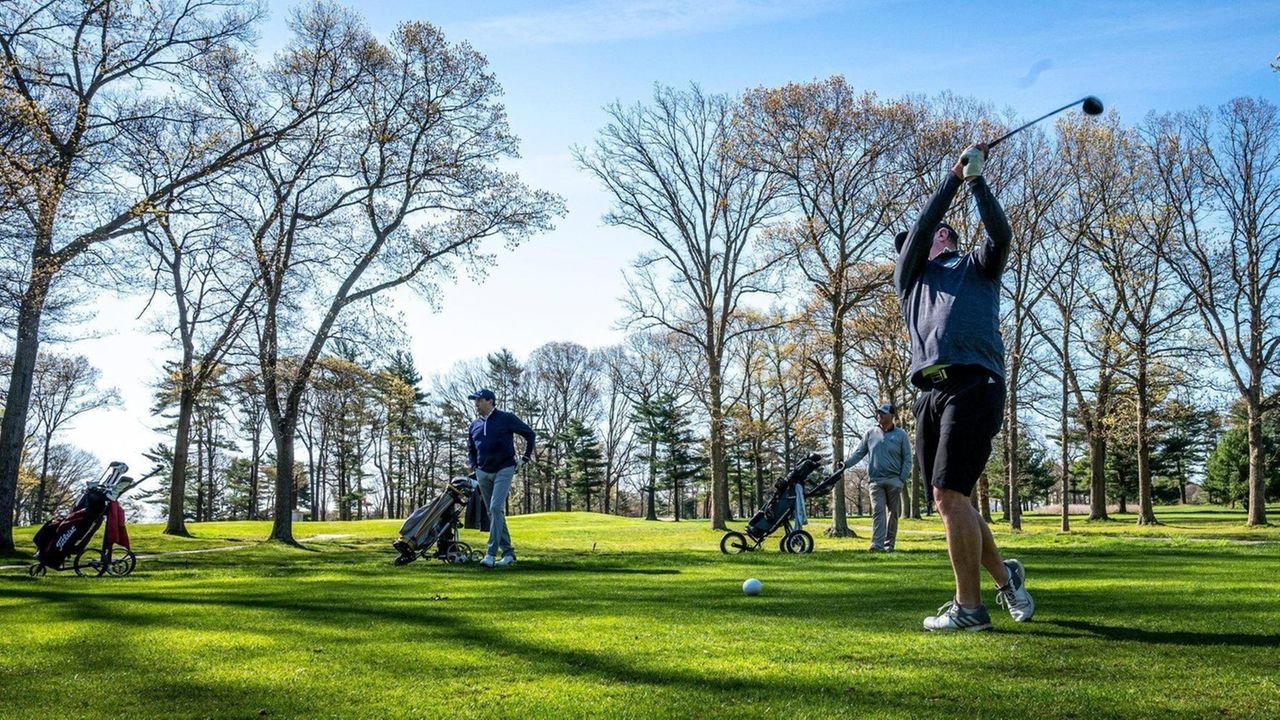 No handshakes on the first tee or the 18th green. No touching or pulling the pins. No golf carts, walking only. No clubhouses or pro shops open. No rakes for the bunkers.

Golf certainly is different around Long Island during the COVID-19 pandemic, but it’s the only game in town.

While all other recreational sports have been shut down, the state has allowed the game to be played under certain regulations and guidelines. With more than 100 private and public courses, and tens of thousands of players, golf cuts a wide swath across the island’s recreational landscape.

The state shut down golf courses on April 9, then started allowing the venues to reopen from April 17 through April 25. With social distancing rules mandating the spreading out of tee times — thus decreasing the total available tee times by about 35% —  LI golfers snapped up the openings by the thousands through online reservations. The five courses at Bethpage and three at Eisenhower Park are sold out this weekend, an indicator of just how avid the playing public is on Long Island.

And the social distancing factor?

No problem, said Dale Pescitelli of Shoreham, who plays with his friends at courses around Suffolk County.

“The social distancing, we’ve been doing that for years,” Pescitelli said. “My four guys, we’re up to 18-handicap players. One guy is down the middle, one guy is way left, and another guy is way right.”

As for the walking, that’s something that Pescitelli, his friends and many LI players are getting used to after decades of cart riding.

“A couple of my buddies aren’t playing that well because they are not used to walking,” he said. “They are going to have to get back in shape. They’ve been riding the last 10 years; it’s either no play or walk.”

Bruce Gillman of Plainview has been playing for thirty years, a lot at Mill Pond and Crab Meadow in Suffolk County, but now is looking for courses that aren’t that busy and might be of out of the way. He and his friends are looking for that social distancing factor.

“I’ve had a lot of luck over at Sunken Meadow, seems pretty isolated up there,” Gillman said. “You get out on the course quickly, you don’t have to be that close to people. I won’t go to Bethpage, too many people there.”

The spread out tee times result in fewer people on any one hole.

“Because there are fewer people on the course you play quicker,” Gillman said. “You don’t get to stop and sit down. You never have to wait between shots, which is real nice.”

But Gillman and friends have had to alter their normal routines and abandon some of golf’s traditions.  “I stay away from my playing partners, they stay away from me. No handshakes, no high-fives,” he said. “I have a kind of regular twosome or threesome, guys I’ve played with for a long time. We all take our cars separately, we don’t car pool like we used to. We get to the course, say hello from a distance, wave to each other, then we take out push carts, go to the starting area staying six feet apart, walking down fairways six feet apart, on greens six feet apart. We maintain our distance even though we know each other a long time.”

One of the consequences of the new guidelines is that not only are pins not removed from the hole when putting, but holes are filled with some sort of synthetic material that keeps the ball from dropping to the bottom of the hole and allows it to be skimmed off the top with a putter, keeping hands away from the cup. In some cases, the cup itself is turned upside down, a situation that is proving a little frustrating to Barry Katz of Plainview.

He was playing the 121-yard, par-3 third hole on the Lake Course at Colonial Springs when he sent his 9-iron shot dead on the pin.

“The cups were turned upside down to prevent balls from going into the hole,” he said.  “My tee shot was tracking toward the hole when it suddenly caromed into the air and came back toward the tee landing in the rough.  Not knowing what caused the carom I realized when getting to the green that it had hit one of the prongs on the upside down cup on the fly.  I chipped on and two putted for a bogey.  Thinking it might have been an ace I emailed the USGA and was told that it was not a hole in one because the ball wasn't holed.”

Bobby Callioras, the pro at Suffolk County’s West Sayville Golf Course, has had to work hard on social distancing.

“It’s been a lot of work [for] me keeping the social distancing guidelines enforced,” he said. “But it’s been an overwhelming response that we are back open.”

Despite the restrictions, Gillman sees the game as a bit of a savior for those who play it.

“It’s been a little nerve-wracking at times when you see other people,” he said. “But other than that it’s been a great diversion, a great getaway from a mundane existence for people.”

If you care to share your golf experiences, opinions and questions during the COVID-19 pandemic, email jeff.williams@newsday.com. As in the past, holes-in-one can be sent to sportsdesk@newsday.com