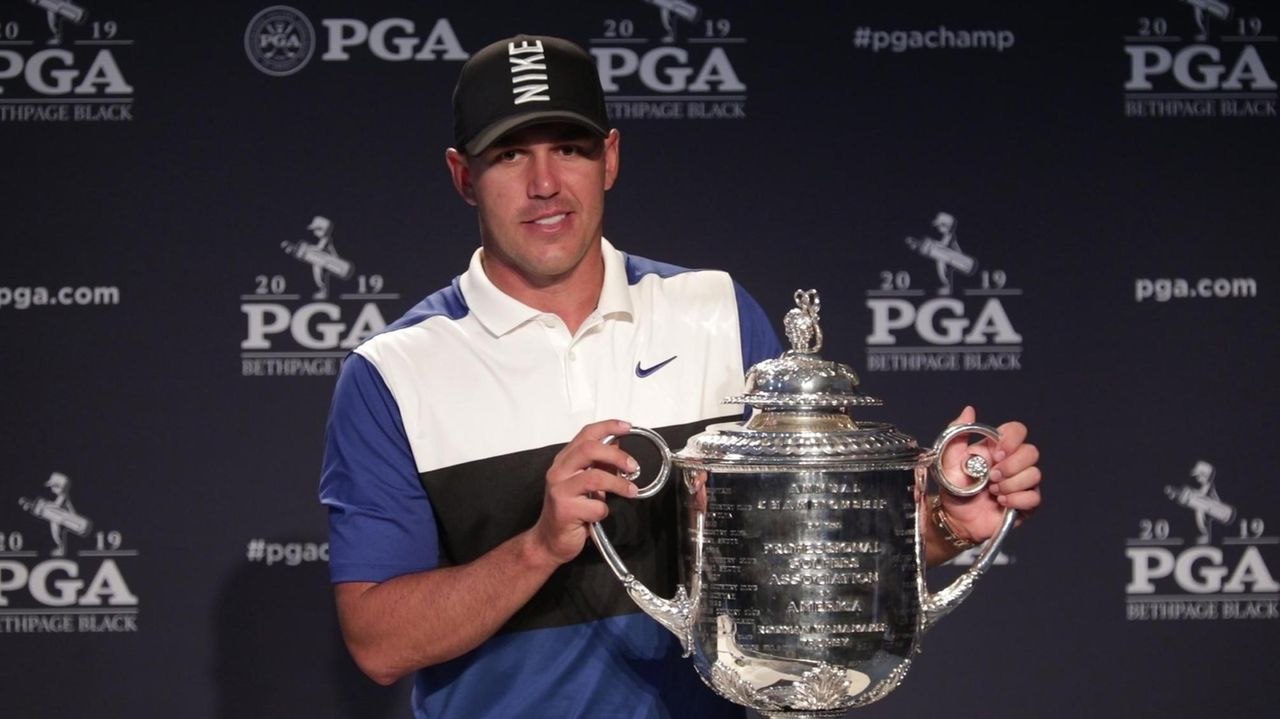 Brooks Koepka saw his seven-stroke lead shrink to just one over close friend Dustin Johnson when he made four straight bogeys coming in on the back nine in the final round of the 101st PGA Championship, but he pulled out the victory for his fourth major title on Sunday, May 19, 2019, at Bethpage Black. Credit: Newsday / Yeong-Ung Yang

Nobody escaped Bethpage Black unbloodied, not even the brute force known as Brooks Koepka, who saw his seven-stroke lead shrink to one over close friend Dustin Johnson when he made four straight bogeys on the back nine in the final round of the 101st PGA Championship on Sunday.

Johnson responded with bogeys at the 16th and 17th holes to expand the margin to three strokes, but Koepka was on fumes, too. He made a three-putt bogey at the 17th and had to get up-and-down for par after a bad drive at the 18th, but after a closing 74, Koepka wobbled into the clubhouse at 8-under-par 272 for a two-stroke victory, successfully defending the title he won last August.

It was the fourth major title for Koepka, who became the first player in golf history to hold back-to-back wins in two majors at the same time. He won a second straight U.S. Open last June at Shinnecock Hills in Southampton.

When Koepka holed out a par-saving 6-foot putt at the 18th, he gave an emphatic fist pump that was uncharacteristic of his usual businesslike style.

“To be standing here with four majors, it’s mind-blowing,” Koepka said. “I know for a fact that was the most excited I’ve ever been in my life there on No. 18. This one’s definitely at the top of the list of how emotionally spent I am and how mentally spent I am.”

Johnson’s closing 69 made him the only player in the field with four rounds in the 60s on the par-70 course. Jordan Spieth, Patrick Cantlay and Matt Wallace tied for third at 2 under, but no one made a serious charge on a day when winds gusted to more than 30 miles per hour and the best score was 68 shot by Gary Woodland and Beau Hossler.

For 64 holes, Koepka looked impervious to the difficult conditions, but he badly missed the fairways off the tee on the 11th, 12th and 13th holes, which made it impossible for him to hit any of those greens. Then he airmailed the 161-yard par-3 14th with an 8-iron when the wind died as he swung and made his fourth straight bogey to open the door for Johnson, who was one stroke behind after a birdie at No. 15.

“This is a tough golf course no matter what the conditions are,” Johnson said. “It’s not like there’s just a few hard holes. They’re all hard .  .  . If you weren’t spot on today, you were going to struggle.”

When Koepka left No. 14, he heard chants of “DJ! DJ!” He said the chants actually motivated him and helped him focus at No. 15, where he striped a drive down the fairway.

Asked if he was nervous about blowing it, Koepka said: “I wasn’t nervous. I was just in shock, I think. I can’t tell you the last time I made four bogeys in a row.”

As he left the 15th tee, Koepka looked to his left and saw Johnson miss a par putt from seven feet to drop two strokes back. That eased Koepka’s tension.

Johnson had driven in the fairway on No. 16, but he hit his approach into deep rough behind the green.

When Johnson bogeyed the par-3 17th, Koepka again had a three-stroke cushion. He said he had “earned the right to struggle” by playing so well through the first three rounds, but he learned it can be difficult to play with such a big lead.

“I think playing with the lead is a very different feeling, very difficult,” Koepka said. “Every time you make a bogey, you’re kind of thinking, ‘I’m bringing everybody back. Why am I doing this? What’s going on?’  ”

But in a contest that was survival of the fittest, Koepka was the last man standing. “There’s a lot of satisfaction for what happened today,” he said. “This was by far the most stressful. I didn’t think Shinnecock was this stressful. I didn’t give myself many chances from the tee, and you do that at Bethpage, you’re in for a long day.”

Tapping the Wanamaker Trophy sitting next to him, Koepka added: “I’m glad I’ve got this thing sitting next to me. This is definitely the most satisfying of all the ones I’ve won.”