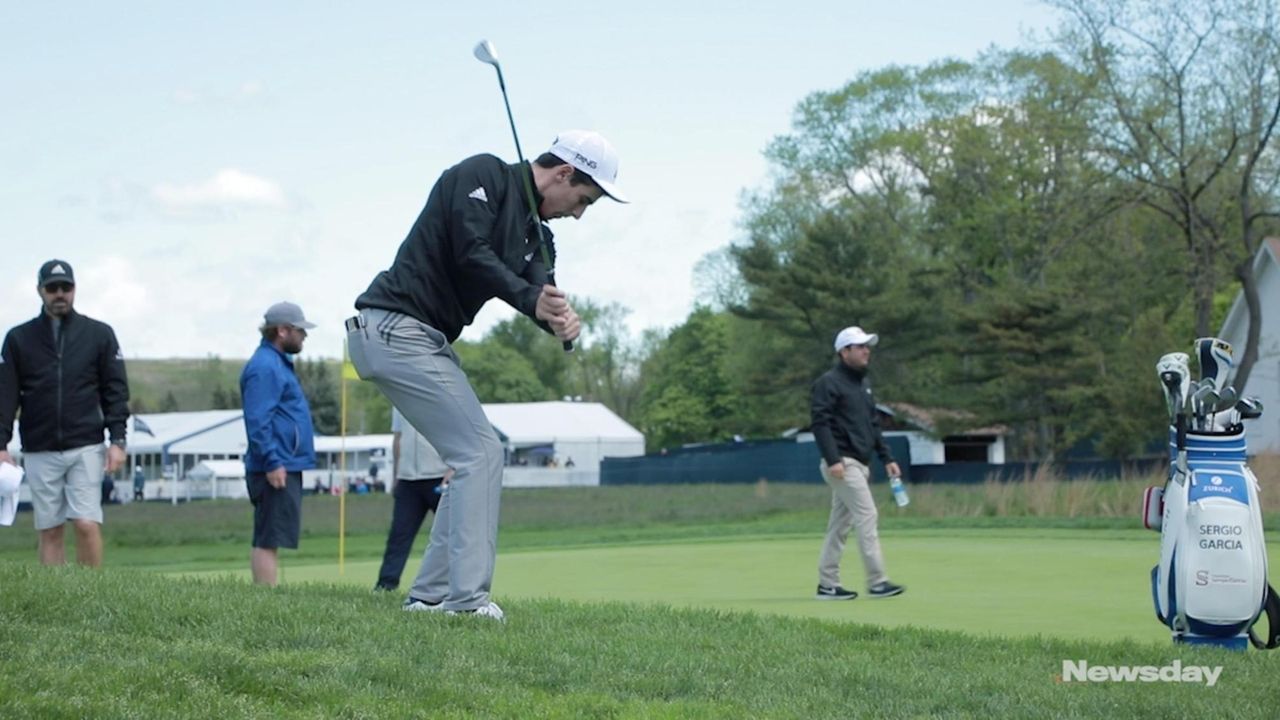 Fans at the 2019 PGA Championship spoke Wednesday at Bethpage Black about who they are most excited to see in the tournament, which begins Thursday. Credit: Newsday / Yeong Ung-Yang Photo credit: James Escher

On the eve of Thursday’s first round of the 101st PGA Championship at 7,459-yard Bethpage Black, Francesco Molinari was asked for his impressions of the course. The current British Open champion summed up the task facing the world’s greatest golfers neatly.

“The greens are really fast, faster than any time I’ve been here in the past. That’s a big factor if you’re coming in with 3-woods, hybrids and 4-irons. I mean, I don’t see the scoring being too low.”

Justin Rose, who is the No. 2-ranked player in the world, said he climbed to the top of the world rankings after developing the ability to carry drives 300 yards in the air, and he believes that quality will separate the leaders from the field this week.

“I could be proved wrong,” Rose said, “but I would say this is the kind of course where you’re looking at the field not necessarily as 156, but 30, 40 guys that maybe can win this tournament based on the length.”

Recent rain softened the course enough to make it play longer, and the rough is so lush that it will impose a severe penalty on those who stray from the fairway. World No. 1 Dustin Johnson said he hadn’t tried to hit anything longer than a 9-iron out of the deep grass.

“There’s only four holes where you can get a fairly short iron in your hand,” Johnson said, underlining the shortage of “birdie” holes other than the two par 5s on the par-70 layout.

During practice rounds, some players have struggled to reach the fairway on the 502-yard 10th and the 515-yard 12th, two of three par 4s that exceed 500 yards. The longest is the 524-yard seventh, which plays as a par 5 for the public and actually is longer than the 517-yard par 5 No. 4. Many players have been forced to hit fairway woods on their approach to No. 7.

Traditionally, the PGA has been played in August, often in blistering hot conditions such as the previous one at Bellerive in St. Louis. Third-ranked Brooks Koepka won that one and rates as a strong contender to defend his title just as he defended his 2017 U.S. Open title last June at Shinnecock Hills in Southampton.

Koepka likes the move to May and said returning to Long Island brings back good memories. His game plan is simple.

“With my length being what it is, you’ve really got to attack the par 5s,” Koepka said. “There’s not too many holes where you step up on the tee and you’re like, ‘Man, this is an easy hole.’ Take care of the par 5s and just try to hang on to the rest of them.”

Rose agreed patience will be a virtue at Bethpage, especially in terms of playing out of the rough. “I don’t want to bring in the word ‘U.S. Open,’ but the golf course has more of that feel to it this week,” Rose said of a course that hosted the 2002 and 2009 U.S. Opens. “We all regard this test as incredibly fair but demanding. It’s probably the most demanding PGA Championship setup and venue that I’ve seen.”

While consensus holds that the winner will come from among the longest hitters, past results at Bethpage Black belie conventional wisdom. Of the four PGA Tour events held here, only 2002 U.S. Open winner Tiger Woods fit that category. Lucas Glover (2009 U.S. Open), Nick Watney (2012 The Barclays) and Patrick Reed (2016 The Barclays) all rank closer to the median in driving distance.

In all those events, Bethpage yielded some scores in the mid-60s, and Rose said a number like that is out there.

“I think you’re going to see maybe a 6-under-par round for sure,” Rose said. “But doing that day to day to day, I don’t see that happening. The guy who wins probably is going to shoot something in the mid-60s one day and from there just try to keep it together around par. Doing it every day is going to be a challenge.”

Confident Molinari now a driving force in majorsIt's been a year's worth of whirlwind for Francesco Molinari. From being just a good, ... Balin, Caron represent LI in PGA at Bethpage BlackDanny Balin, the head pro at Fresh Meadow Country Club in Lake Success and the ... CBS plans to keep close watch on TigerAfter Woods' victory at the Masters last month, how can CBS resist? Tiger takes day off, but talk about him doesn'tOne thing hasn't changed about Tiger Woods, and that's that he casts a mighty large shadow.

Sam Darnold said the trade from Jets 'stings a little bit'
1:57
Yankees get much-needed win over Rays
Isles trade for Senators defenseman Coburn
Smith hoping to remain with Rangers as trade deadline looms
Highlights: Isles vs. Rangers
Boone on starting Gardner over Frazier: All about matchups
Didn’t find what you were looking for?