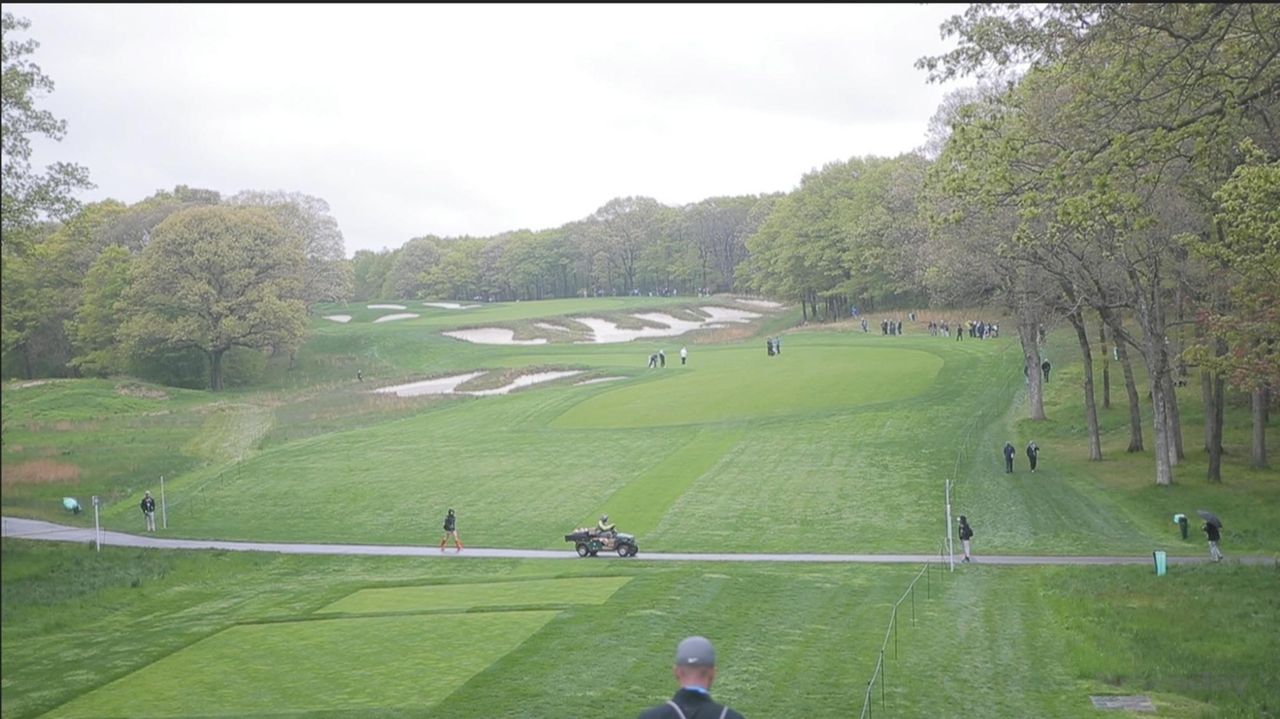 On the first day of practice rounds at the 2019 PGA Championship, golf fans gathered along ropes to watch players getting a feel for a wet and cold Black Course at Bethpage State Park. Credit: Newsday / Raychel Brightman

The only water hazard at Bethpage Black is the pond in front of the green on the par-3 eighth hole, but after a rainy weekend followed by a Monday afternoon deluge, it’s fair to say all 18 holes could be considered a potential water hazard for the 101st PGA Championship that begins on Thursday.

In fact, when Ireland’s Shane Lowry arrived at the course on Sunday, he said the first hole looked like the set for the movie “A River Runs Through It.” But Lowry and several other top contenders were pleasantly surprised to see during their Monday morning practice rounds how well the course handled so much water.

“It’s unbelievable,” Lowry gushed. “I can’t believe how dry it is. The fairways are firm for the rain we’ve had.

“I came in [Sunday] to register, and the first fairway was flooded. We get down there this morning, and it’s perfect. And then, the greens are perfect. The ball’s even taking a bit of a bounce on them. The course is brilliant.”

Lowry’s sentiments about Bethpage Black’s conditioning were echoed by Dustin Johnson, the No. 1-ranked golfer in the world. “I know it’s had a lot of rain, but the greens are fairly dry,” Johnson said. “I was surprised how dry it was. The fairways are soft. You’re not really getting any roll, but it’s not muddy.

“It’s been great. And the greens are unbelievable. They’re perfect.”

Bethpage Black’s official length is 7,459 yards, and it will play every inch of that after all the moisture it has absorbed recently. Lowry described it as “brutally long” on Monday, noting that cool morning temperatures in the 50s were a factor. But he predicted the course will firm up and become extremely difficult because the forecast calls for warmer weather with only a 30 percent chance of showers during the morning of Thursday’s first round and dry conditions the rest of the week.

Bryson DeChambeau, the No. 8-ranked player in the world, saw Bethpage for the first time, and it met his expectations. Many have said driver will be the key club in the bag this week, and he agrees.

“One hundred percent,” DeChambeau said. “Drivers and long irons are the key clubs this week. If you can control that and make sure you’re hitting it in the fairways and on the greens, controlling your spin rates, you’ll be on the top of the leaderboard.

“If I have my driver going well, I’ll be deadly…I’m excited to play it. This is always a golf course I thought would suit my game.”

Although the consensus holds that the big bombers should be favored, Brandt Snedeker has a different view. He finished second in the FedEx Cup playoff event that was staged on Bethpage Black in 2012.

“Driver is important, but I don’t think it’s the key club,” Snedeker said. “I think this week putting is going to be the key thing because the greens are so fast and so good. I think guys will be able to make a lot of putts. It will bring more people into it.”

Snedeker said the fairways for this major championship are wider than for the 2002 and 2009 U.S. Opens held on the Black. “Don’t get me wrong,” Snedeker said. “You’ve got to hit the fairways here, especially if you hit it pretty far because there are a lot of uphill second shots on these par 4s. They’re tough to hit, especially if the greens are firm. As important as that is, the greens are so good that somebody is going to make a ton of putts.”

Still, guys like Gary Woodland, who can wield the big stick, can’t help but feel they have the advantage. Woodland tied for fourth in the 2016 FedEx Cup playoff event at Bethpage and believes he’s a horse for this course.

“This is one of my favorite courses we play all year,” Woodland said. “It’s just a great golf course, a ‘big boy’ course. The rain is going to make this place long. It’s going to make the rough pretty tough. If you drive in the rough, it’s hard to attack and then you’re scrambling to make pars.

“I’m excited for this week. You’ve got to drive the ball in the fairway, so for me, the driver is a huge key this week.”