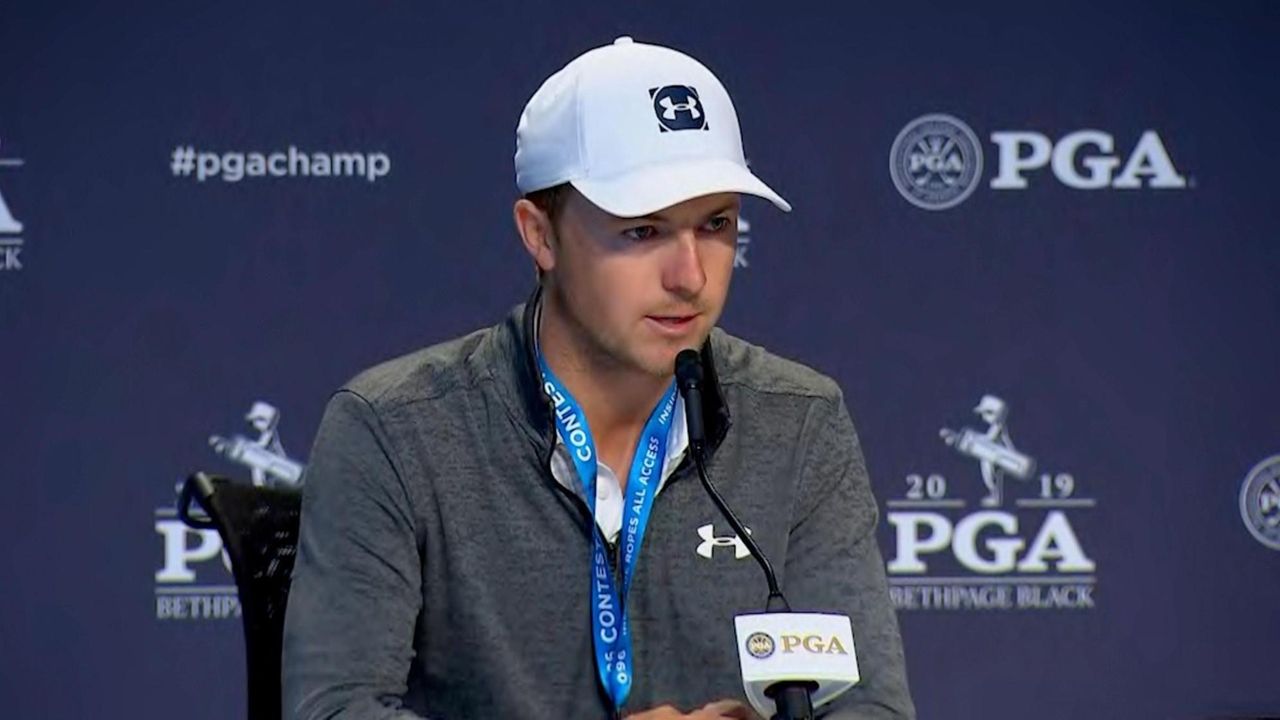 Speaking to the media at Bethpage State Park, Jordan Spieth said he knows the best way to win the PGA Championship at Bethpage Black this weekend is to limit the amount of mistakes on the course. Credit: News 12 Long Island

In his best effort to look at his slump positively, Jordan Spieth insists that if he hadn’t been so good, he wouldn’t look so bad.

“I don’t want to use the word `negativity,’ but the questioning and the wording that are used to describe me by the media or whoever over the past year has only come up because of the amount of success that I’ve had,” he said on the eve of the PGA Championship, in which a victory would complete his career Grand Slam.

Joining the ranks of Gene Sarazen, Ben Hogan, Jack Nicklaus, Gary Player and Tiger Woods in the exclusive club of golfers who have won each of the four modern major championships looks like a real longshot at best. But Spieth is doing his best to handle his struggles with as much grace as he handled the victories that put him on history’s doorstep.

He won three majors before the age of 24, which is why he looks so lost. It is why it seems so odd that he has not had a top-20 finish this season and not had a win since the 2017 British Open. His point is that, if he were just another up-and-coming 25-year-old, his year would look pretty standard.

“If I didn’t have the success I’ve had, then, first of all, I wouldn’t be in here right now,” he said during a news conference in the Bethpage State Park media center, mindful that someone who is No. 39 in the Official World Golf Ranking generally is not invited to meet the media. “Second of all, it would be, `Oh, his game is progressing nicely.’ You’d actually be looking at the progression of the game instead of the comparisons constantly to when someone was at their best, which I think is unfair to anybody in the field.”

But the fact is that Spieth did have all that success, he did have a knack for hitting iron shots close to the hole, he did have a masterful putting stroke. He did have a polite but gritty aura that made an observer believe he was always going to be in the mix, especially in a major.

So, he deals with the questions and the frustration. He handles it the way any golfer would: focus on the next tournament, the next round, the next shot. Work on what’s wrong and try to make it right. Then believe that all it will take is one good week…

Spieth and instructor Cameron McCormick have discovered that the golfer’s setup “got a bit lazy,” which made his hands come into the ball too steeply. “We’re just trying to get my swing back to where it was in 2017,” he said.

At the same time, he asserts that he is not a candidate for “Sports Greatest Comebacks” just yet. “I didn’t go away from the game for five years. I just happened to not win in the last year-and-a-half or so,” he said. “I’ve had friends on tour reach out and say, `Hey, everyone goes through ups and downs. Stick to it. You’re doing the right things.’ Whatever.”