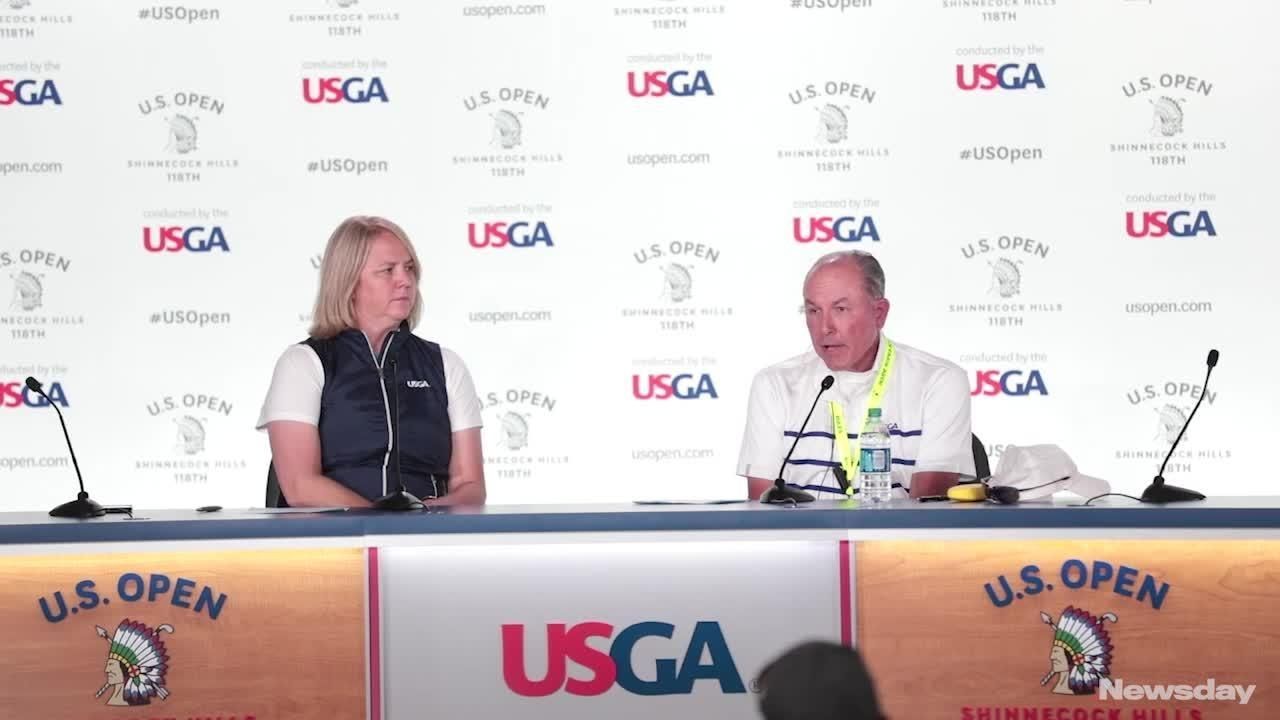 USGA senior managing director John Bodenhamer explains why Phil Mickelson got a two-stroke penalty for hitting a moving ball at the U.S. Open at Shinnecock Hills Golf Club on Saturday. Mickelson, who was serenaded with "Happy Birthday" by fans, said he accepted the penalty and moved on. (Newsday / Yeong-Ung Yang, News 12)

One of the appeals of the U.S. Open is watching the world’s best golfers act like the rest of us. On Saturday at Shinnecock Hills, Phil Mickelson took that to an absurd extreme that shocked a sport serious about its rules and decorum.

On the 13th hole of the third round — and on his 48th birthday — one of the best golfers of his era ran down an errant putt and hit it back toward the cup before it had stopped moving, drawing a two-stroke penalty for a score of 10.

He finished his day 11 over par with an 81 and is 17 over for the tournament, far out of contention but in the thick of every golf fan’s conversation.

Mickelson later insisted his maneuver strictly was strategic, not a result of mounting frustration — either with himself or the course setup. After emerging from a long visit to the scorer’s hut, he rejected the notion that the incident might harm his reputation.

“I don’t see how,” he said. “If somebody’s offended by that, I apologize to them, but toughen up. It’s not meant that way. I simply wanted to get on to the next hole.”

The nuttiness began when Mickelson’s bogey putt on the par-4 13th missed right, rolling off toward parts unknown. He jogged to catch up to it, then swatted the ball back uphill and nearly holed it. That was shot number six.

After his putt for triple-bogey lipped out, he tapped in for an eight — plus the two-stroke penalty.

“The ball was going to go off in a bad spot,” he said. “I didn’t feel like continuing my display, and I’ll gladly take the two-shot penalty and move on.”

Mickelson said he had been tempted to use that strategy before and probably should have at times at the Masters “on 15, when the ball years ago would go off into the hazard. That would have saved me a shot or two back then.”

Rule 1-2 calls for disqualification if a player breaks a rule to give himself a competitive advantage. Bodenhamer said the rules committee “mobilized quickly and unanimously decided this situation is specifically and explicitly covered under Rule 14-5.”

Had Mickelson stopped the ball rather than hitting it while it was in motion, he might have been kicked out of the tournament. “The fact that we dealt with was that he made a stroke at a moving ball,” Bodenhamer said.

After the hole, Mickelson was seen laughing with his playing partner, Andrew “Beef” Johnston, who shot 82 in the third round.

Said Mickelson, “I mean, how can you not laugh? It’s funny. It’s part of the U.S. Open. It’s just funny. I didn’t mean it disrespectfully. If you’re taking it that way, look, I’m sorry, that’s not the way it’s meant.”

Mickelson and Johnston were a huge hit with fans, as Mickelson was serenaded with “Happy Birthday” at almost every hole.

Mickelson still was smiling as he parred No. 18. After speaking to reporters, he spent a long time posing for selfies and signing autographs.

“I’m not playing as well as I would like, but I don’t feel like it was frustration that crept over,” he said. “I’ve had fun. Beef and I had a great time today. People here have been tremendous. They’ve made my birthday very special and I’m very appreciative of that.”

It certainly was a memorable one. “Look, I was laughing, I was having fun,” he said. “I enjoy the challenge of this, because we don’t get to see it but once a year. Sometimes it gets a little goofy, sure, but it’s all within the rules.”

Herrmann: Mickelson is bad sport once againBy galloping after the ball and smacking it as if he were playing polo without a horse, Mickelson slighted Shinnecock Hills and disrespected the biggest tournament in his country. U.S. Open leaderboardSee where each player stands at the U.S. Open at Winged Foot