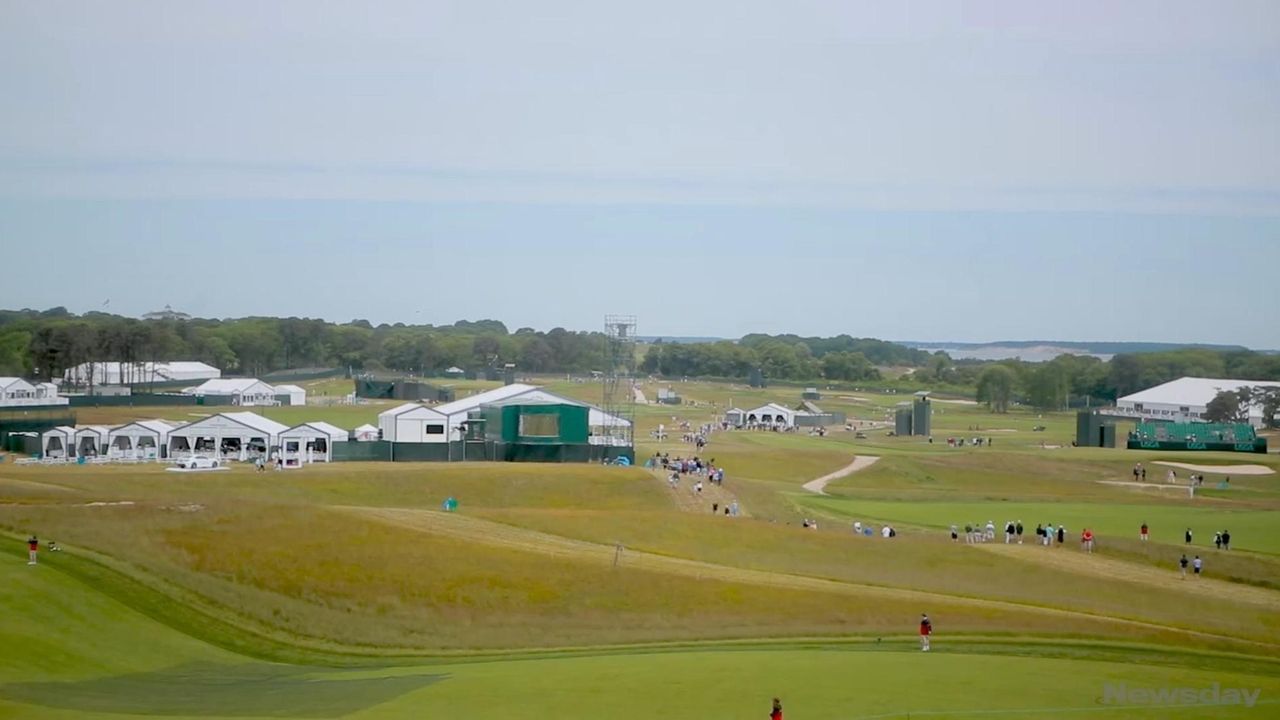 At the U.S. Open at Shinnecock Hills Golf Club on Monday, Phil Mickelson talks about the course even as excited fans and town officials are enjoying everything the Open has to offer. Credit: Newsday / Raychel Brightman/William Perlman

The one thing that would make Phil Mickelson’s career complete is the very thing he wants most to avoid, at least for the next four days. At the age of 47, having gone 26 previous U.S. Opens and untold heartaches, he has learned not to look too far ahead. He definitely knows not to look back, either.

The Open this week at Shinnecock Hills is one of his last best chances to complete the career Grand Slam, a possibility that he says he will get around to eventually. “The last thing I’m thinking about now is trying to win,” he said during his news conference Monday afternoon. “I’m trying to get myself in position for the weekend because, when you try to go out and win a U.S. Open, you lose it quick.

“So, I’m trying to just position myself these first couple of days, get through the first challenge of Thursday, Friday and have a chance on the weekend,” the five-time major champion said, “because a lot happens on the weekend.”

Disappointment is what has happened most often on weekends at the U.S. Open. He has finished second (alone or tied) six times, including the 2004 championship at Shinnecock. Mickelson was in solid position on Sunday that year, then double-bogeyed the par-3 17th. “Unfortunately, it was a bad time,” he said of his score on that hole.

Still, he always speaks highly of Shinnecock Hills. His conversations always make it sound as if the grounds evoke good memories rather than more dejection. That is to say, he does not let himself get mired in regrets.

“Well, I use the disappointments as a learning experience,” he said, adding that experience taught him not to be too aggressive on Shinnecock’s par-5 16th hole. For instance, in 1995, I played 16 6-over par. If I played that hole even, I could have won.”

Experience has molded and sharpened his opinions. On Monday, he called Shinnecock one of his favorite Open venues and said the current setup is “the best that we’ve seen.” Mickelson said the revised Shinnecock, with its paucity of trees, its widened fairways and its shaved areas around the greens will test every facet of everyone’s game, especially chipping and putting. Those are his specialties.

During the same interview session, though, he criticized the U.S. Golf Association for lengthening par-5 holes and the edge to which it takes Open courses. “It’s a very difficult job to find the line of testing the best players to the greatest degree and making it carnival golf,” he said.

At times during his news conference, his voice was drowned out by the sound of the wind whipping around the media center’s canvas tent. That could be more representative than anything else of how the tournament will go. Wind is the course’s best defense. Mickelson pointed out that breezes influence decisions on pin positions. If the wind does not blow strongly—and forecasts suggest they will not—the course might not be as tough as the USGA would like.

As for the factors that can be controlled, the USGA is pleased. Jeff Hall, the association’s managing director of rules and Open championships, said, “I think our preparations this week have been outstanding. It’s really been the detail things that we’ve been working on. Jon [Jennings, the course superintendent] and his team have got it really well positioned for the coming week . . . We’re excited to see what it will produce.”

It is too early to predict what the wind will do, or what the winning score will be. If the former is tame, the latter could be 10-under par, according to several people familiar with Shinnecock Hills.

As Mickelson can tell you, though, there is no use in focusing that far ahead. In fact, he was asked if he ever actually had tried to win the U.S. Open on a Thursday. “Yes,” he said, “and I was home Friday night.”