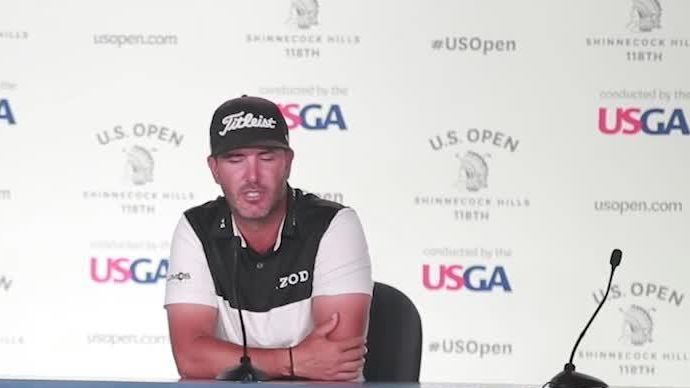 After a rocky practice earlier in the week, Scott Piercy sits near the top of the leaderboard ending Thursday 1-under at the U.S Open at Shinnecock Hills, attributing his improvement to a change in mindset to help him relax.

Scott Piercy was so frustrated with his practice round on Wednesday that he walked off the course at Shinnecock Hills after four holes and five lost balls, returned to his rented house and “pounded some pizza.”

Presumably he did not stay up late, because he was up at 4 a.m. and due on the first tee with the first starting time of the entire U.S. Open: 6:45 a.m. Thursday.

This time he lasted all 18 holes, and when he walked off the course he was 1-under par and in the lead. Many hours later, when the afternoon groups were done, he still found himself tied for the lead.

He had three birdies and two bogeys — both on par-3s. Not bad for a guy who made the field as an alternate qualifier.

That ultra-early start time paid dividends, because Piercy said the greens were “perfect” and that for the first nine holes the winds that bedeviled the field all day had not yet picked up.

Piercy is no novice. He is 39 years old, two years ago finished tied for second at the U.S. Open at Oakmont and has won four PGA Tour events. Still, he was not on many favorites lists for this event.

That includes Piercy himself. “I actually really struggled with my preparation this week,” he said. “I didn’t really see this coming.”

He said the key was low, hard shots that minimized the wind that kicked up once he made the turn.

Piercy was fortunate to be here at all. He missed by one shot at a sectional qualifier in Memphis, Tennessee, and settled for being an alternate. He found out late last week that he would be invited into the field and began making housing arrangements.

That pizza-pounding session on Wednesday allowed him to “calm the mind” and clear his head. He also studied Instagram video of himself.

Not that he was completely surprised he was able to turn things around after bad practices. “I mean, you know, I do this for a living,” he said.

Because he teed off so early on Thursday, Piercy faced a long wait until his Friday afternoon tee time. He said the house he is staying in recently had cable installed, with only “like 10 channels,” none of which carry the U.S. Open.

(A USGA official explained that he could watch a live stream on USOpen.com. “OK, I’ll do that,” he said.)

So after waking up early Thursday he planned to sleep in and let everyone else set the tone in the morning this time.

After a rainy Wednesday, both figuratively and literally, everything came up sunny on Thursday.

“I even told my wife, I’m like, ‘There’s a good chance I’ll be home [to Las Vegas] on Saturday; unless I show up a different person in the morning, I’ll see you Saturday,’” he said.

Then he woke up a different person in the morning.