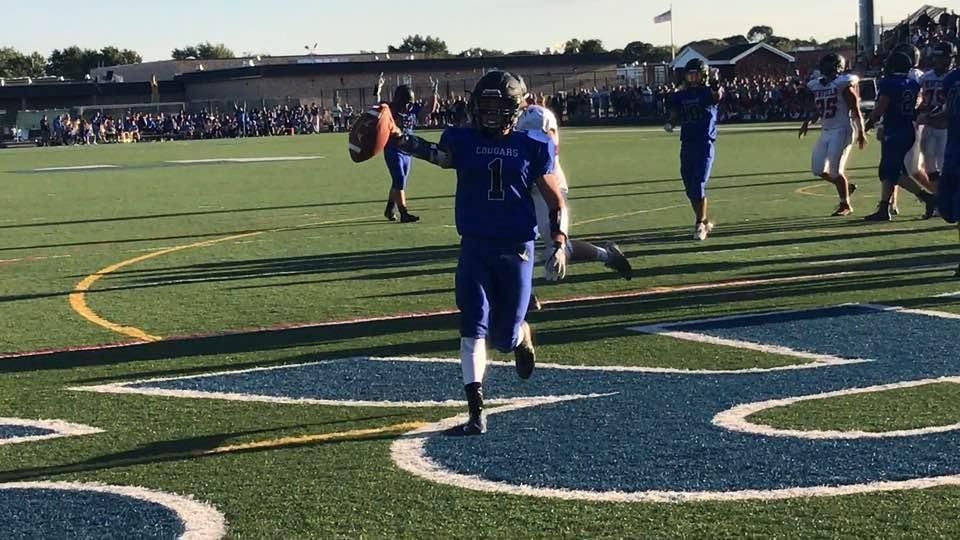 There was no question who was getting the football on fourth-and-2 with less than 20 seconds remaining. Alec Kiernan and everybody at Centereach knew it, and there was only one thing on the running back’s mind.

“Score,” Kiernan said. “Just get the last bit of energy in my body and do whatever I can do get in.”

And the senior did just that, diving into the end zone with 13 seconds remaining for a 2-yard touchdown and the final score in host Centereach’s 18-12 victory over Newfield in its Suffolk II football opener. The Cougars controlled the final seven minutes of the game, putting together a 66-yard drive behind the offensive line of Mike Grieco, Josh Ackerler, Steve Sullivan, Andrew Colletti and Chris Rupolo.

“I told Alec right before the play, ‘You want to get in the end zone, I’ll be right there in front of you,’ ” said fullback Vincent Liotta, who delivered a big block on a linebacker perfectly reading the toss to the left on the final score. “Follow me and he made it happen. I’m always confident in him.”

“He’s one of those kids where his individual effort just sometimes over shines anything we do wrong in the backfield,” coach Adam Barrett said. “He’s a special back.”

“It kind of went back and forth,” Barrett said. “It was like a boxing match. You never knew where the next big play was going to come from.”

Newfield took the lead with 2:29 remaining in the third quarter on Blaszky’s 3-yard touchdown run, his second score of the game. The Wolverines’ touchdown came one play after a Centereach fumble following a 96-yard touchdown run by Kiernan being called back for a penalty.

But Centereach scored early in the fourth quarter on Devin Demetres’ 7-yard touchdown run to tie the score at 12 before Kiernan’s eventual winning touchdown.

“Just never put your head down, never give up,” Kiernan said. “Just keep playing. It’s not over until it’s over.”

With the two schools separated by only 3.5 miles, there was plenty of bragging rights on the opening game. And when the Cougars had the ball with the score tied and a chance to score and win, they weren’t going to let it get away.

“We knew what was on the line here and we just knew get in [the end zone],” Grieco said. “That was the only goal.”

“This was the biggest game of the season,” Kiernan said. “We were saying it all week.”