Oceanside's Charlie McKee runs the ball in the second quarter during a Nassau Conference I football game between Farmingdale and Oceanside on Saturday, March 13, 2021. Credit: Bob Sorensen

Meet the players who earned our top honors after the fall 2020 season that was played in the spring of 2021 because of the coronavirus pandemic.

The three-year captain is Oceanside’s all-time passing leader. He earned Newsday’s Thorp Award presented to Nassau’s top player. He was also voted the Snyder Award winner as Nassau’s top quarterback. McKee led the Sailors to a 7-1 record completing 126 of 196 passes for 1,409 yards and 17 touchdowns. He had 488 yards rushing and 12 scores. He is the fourth junior to win the Thorp Award. The only two-time winner of the Thorp was Mepham’s Amos Zeroeue, who went on to play in the NFL.

The admiral of Long Island’s top offense passed for 1,519 yards, completing 103 of 159 passes and 17 touchdowns. He completed 65 per cent of his passes. He was voted Newsday’s Hansen Award winner presented to Suffolk’s top player after leading the Golden Flashes to a 6-0 record and the Suffolk Conference III title. He also earned the Boomer Award as Suffolk’s top quarterback. Cheshire passed for a school record 500 yards in a win over Westhampton Beach. Cheshire threw for 4,734 yards and 60 touchdowns in a two-year career. He holds the single season record for touchdown passes thrown in a season with 47. He will play at SUNY-Brockport. 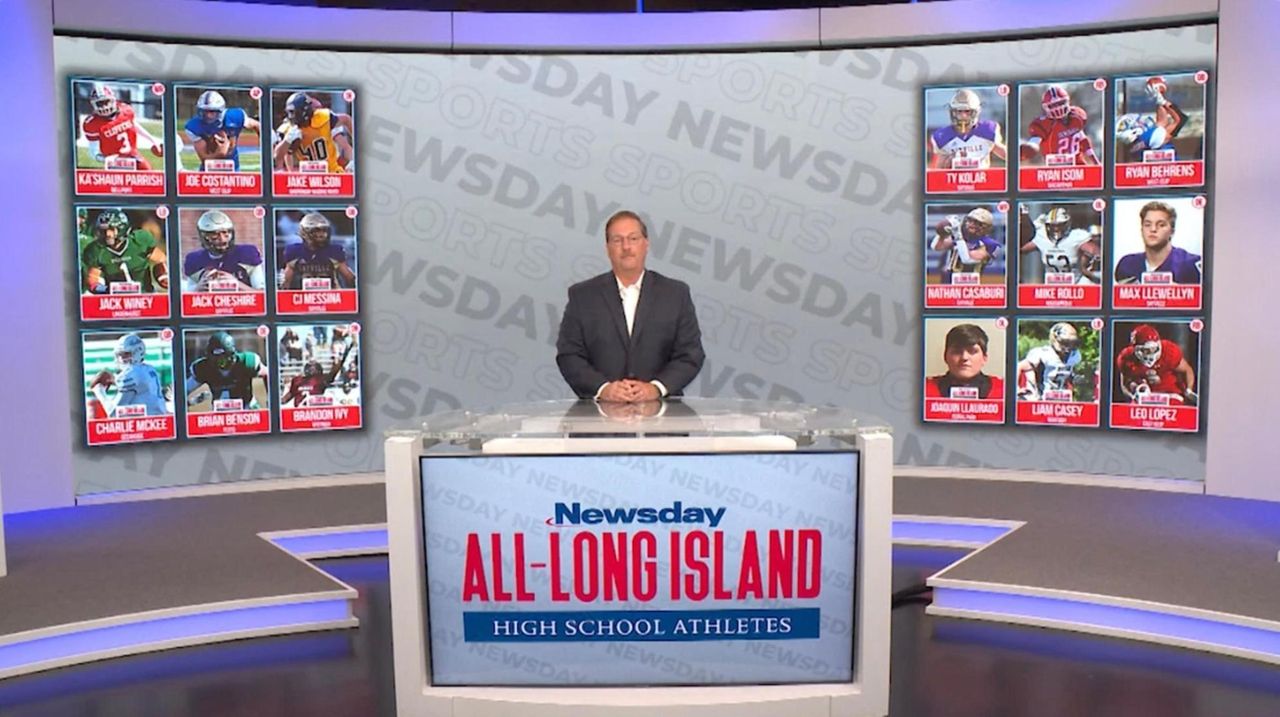 Behrens was 160 pounds of defensive fury. A fearless hitter, he’d come up from his secondary position and lay it on halfbacks in every game. He was a can’t miss, open-field tackler and a guy that could run with anyone. In this shortened season he set the West Islip record for returns for touchdowns with three. He will attend Brown University.

A tenacious rusher, who had 12 sacks in only five games for the Colonials. He had 32 tackles and two forced fumbles leading Floyd to the Suffolk Conference I title. He was also an outstanding blocking tight end.

He was a three-year starter on both sides of the ball for the Generals. He was one of the best linemen as a junior on a senior-dominated team. At 6-2, 250 pounds, he can run sideline to sideline on defense and is a devastating blocker on offense. Many times, he is seen on film driving his defender out of the play.

He’s the run support guy that keyed the Sayville defense. He had speed across the field, a lockdown man-to-man cover guy, who had 33 tackles, including 11 solos and three interceptions. He’s also a cornerstone of the Sayville offense. He caught 26 passes for 396 yards and six scores, including a three TD performance against Westhampton Beach.

He was the do-it-all piece to the championship puzzle as the Trojans captured the Nassau Conference II title. He made the big plays when the Trojans needed them. He rushed for just over 500 yards, made key stops on defense and his fourth quarter fake punt and run for a first down sealed the 14-7 championship win over MacArthur.

He was a tackling machine for Wantagh and a big reason they won the Nassau Conference IV title with a 26-13 win over previously unbeaten North Shore. According to coach Keith Sachs, he had 90 tackles, including 23 for a loss and 12 sacks. And he’s only a junior.

He is pound for pound one of Long Island’s greatest players – in the last 40 years. A two-way impact player who made key plays against a rugged Bellport team that had to be seen to be believed. He rushed for 833 yards and 10 touchdowns in five games. He also added two scoring passes, one to Nolan Walters that clinched the Suffolk Conference II title in a comeback win over Bellport.

He earned the Patrick Pizzarelli Award as Nassau’s best wide receiver. He totaled 35 catches for 813 yards and nine touchdowns. He was the downfield threat, scoring four touchdowns on 70 yards or more.

He was a punishing linebacker who registered 45 tackles, including five for a loss as the Sailors finished 7-1. He earned the Piner Award as Nassau’s top linebacker. The two-way star also rushed 75 times for 519 yards and five scores. He’ll play college football at Hobart and William Smith College.

The Thorp finalist passed for 2,121 yards and 18 touchdowns and rushed for 672 yards and 12 scores in his two years as the starting quarterback. His performance in the Nassau Conference I title game keyed Massapequa’s first title since 1998. His mad scramble on the final drive of the season turned what looked like a certain third down 13-yard loss into a 27-yard gain and set up the winning run.

One of Long Island’s top two-way starters and the Hansen Award runnerup. Hibbert was devastating on both sides of the ball. He returned three of his four interceptions for touchdowns. He added 675 yards rushing on 50 carries for another 13 scores – an average of 13.5 yards per carry. He returned two punts for touchdowns. He took over a close Connetquot in a three-minute span, throwing for one score, returning a punt for another score and punctuated the performance with a pick-6.

The Thorp finalist was a workhorse of the Generals offense rushed for 200 or more yards four times this season. He was the hammer behind an outstanding offensive line that keyed the run into the Nassau Conference II final. He rushed 154 times for 1,307 yards and 14 touchdowns.

He was right smack in the middle of a thrilling season for the Wildcats, who stormed into the Suffolk Conference I title game against Floyd. Ivy, a two-way starter grabbed four interceptions and returned one for a score and also had a 99-yard fumble return in a playoff victory over Longwood. He added 15 catches for 240 yards and 3 touchdowns.

An active inside backer with a nose for the ball, Kolar comes from a long line of stud defenders in his own family. He finished with 47 total tackles, a sack, forced fumble and an interception. He was a big-time hitter. If there could be a weapon on defense – he would be the one.

He was an athletic linebacker, who led the Vikings in tackles. He could also drop in coverage and had four interceptions. He added 769 rushing yards on 86 carries for 8.9 yards per carry. He scored 18 touchdowns.

The right tackle at 6-3, 265 pounds was like a wall for the Floral Park offense as he dominated the line of scrimmage - a real bulldozer. He also had 36 tackles including six for a loss at nose guard.

The emotional leader for the Golden Flashes. Whether it was big defensive plays or clearing the way for one of the talented halfbacks to score, that was Llewellyn. He earned the Rob Burnett Award as Suffolk’s top defensive player and the Zellner Award for the top lineman. He was fierce on both sides of the ball. He had 37 tackles, including 12 solos and five sacks, a safety and a fumble return for a TD.

His return from a lower leg injury helped East Islip get off to a 5-0 start. The hard inside runner had 128 rushing attempts for 1,088 yards rushing and 11 touchdowns. He earned the Cipp Jr. Award as Suffolk’s best running back. He averaged 8.5 yards per carry.

In an offense that boasted multiple scoring threats, Messina emerged as the scariest. He had a school record 257 yards receiving in a win over Westhampton Beach. He earned the National Football Foundation Award for Suffolk’s top receiver with 37 receptions for 605 yards and eight touchdowns.

His 35-yard dash around the right end and down the visitor’s sideline brought Massapequa its first Nassau Conference I crown since 1998. He was electric all season. Morrow had 23 catches for 342 yards and 7 scores and rushed for 561 yards and 7 scores. He contributed 32 tackles and two interceptions.

One of Long Island’s dynamic two-way players. He caught 18 passes for 379 yards and seven touchdowns, added another 220 yards rushing and six scores. He had one punt return for a score and intercepted four passes and recovered a fumble.

There was something about Rollo that screamed intensity. The 5-10, 250-pounder took over games on both sides of the ball. He was named the Martone Award winner presented to Nassau’s top lineman. He was called on to play every position on an O-line that led the way to average 39 points per game. He registered 42 tackles and eight sacks while playing end and tackle. He will play for Western Connecticut.

He was all about the big smile and the big hits. A classy kid off the field, who was a road grader that anchored the Colonials offensive line for three years. He made all the O-line calls and directed the run schemes pre-snap. In an offense that was ran the ball 95 per cent of the time. He is a preferred walk-on at Stony Brook University.

He was a four-year player at Syosset where he played both ways. His greatest impact came at outside linebacker where he tallied 41 tackles, including seven for a loss and recovered a fumble. His tackles came in relentless pursuit. He also rushed 80 times for 585 yards and 12 touchdowns.

You want a guy that sheds the block, makes the tackle and celebrates with passion every game. You need Brendan Staub. This guy was impossible to run against in the middle of the Garden City defense. He keyed another Nassau Conference II title run for the Trojans.

No one dared run to Wilson’s side of the field. He sealed the end and finished with 44 tackles, including seven for a loss. His signature game came in the Suffolk Conference IV title game where he played halfback for the first time all season and rushed for four touchdowns and 101 yards in a 34-20 win over Mount Sinai.

The Burnett Award winner as Suffolk’s top defensive player as a junior in 2019 was on his game in the COVID shortened season at Lindy – as they only played four games. Winey was awesome with 54 tackles, including three sacks and two interceptions. He earned the Collotta Award as Suffolk’s top linebacker. The four-year starter, one of the best to play on Long Island also had 321 yards rushing and a score.

He led the Golden Flashes to the Suffolk Conference III title. Had the guts to play Suffolk Conference I powerhouse Floyd in a non-league crossover game to prove that in a given year Davey could beat Goliath – and his team didn’t disappoint dominating the game, 24-0.

He led Massapequa into the Nassau Conference I championship game and guided them to avenge the only loss of the season with a stirring 36-29 title win over Oceanside. It was Massapequa’s first title since 1998.