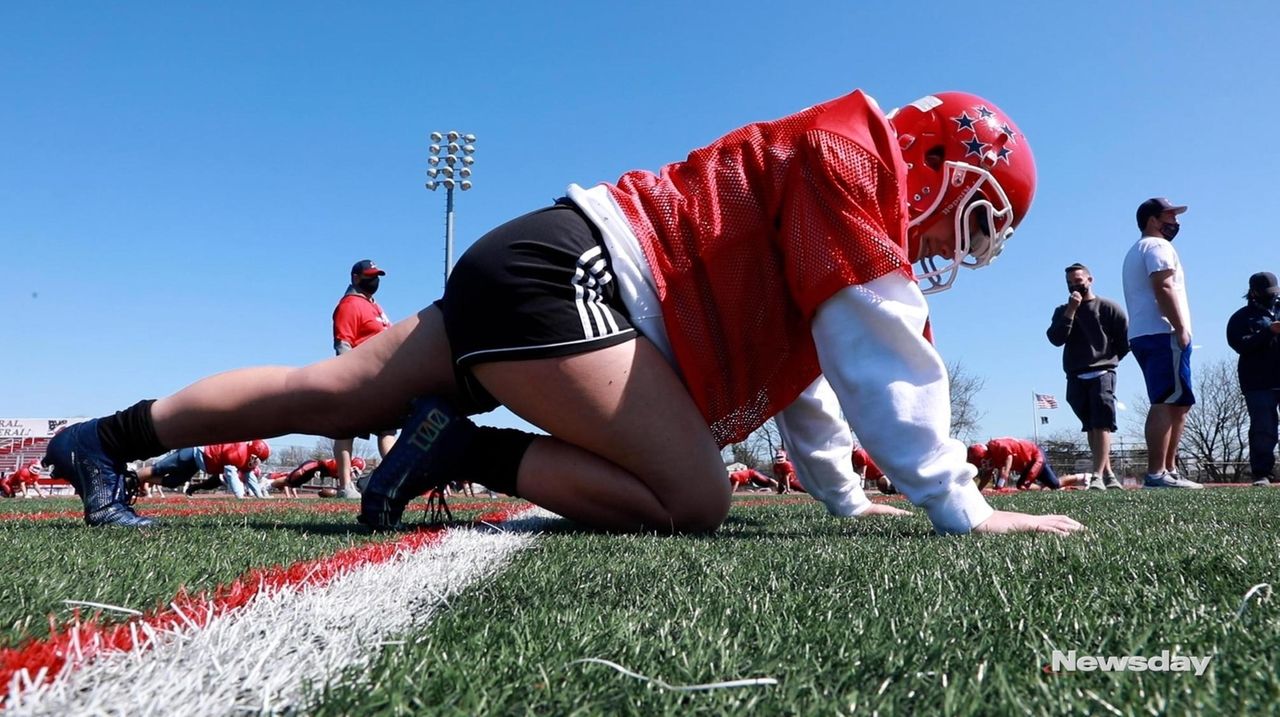 Alyssa Accordino has long been a standout for the MacArthur High School girls soccer team, a starter since she was a freshman. Now a senior, she added a second role: starting placekicker for the Generals’ football team.

Accordino concedes there was an adjustment period, but it didn‘t take long. She got into her first game on March 20, Week 2 of a season truncated and displaced by the coronavirus pandemic. On the field to kick an extra point, that’s when she felt the nerves of what she was undertaking finally sink in.

"I didn’t really feel the exact pressure and the nerves until that first game ," Accordino said. "I realized ‘This is real, this is happening, there’s another team coming at me.’ And if I don’t make it, it’s on me."

Accordino missed her first and second extra-point attempts that day, but made the next three. She hasn’t looked back.

Accordino was 4-for-4 on extra points in Friday night’s 28-7 victory over South Side in a Nassau Conference II semifinal game and has made 26 in a row. She is 26-for-28 on the season. She also made a 32-yard field goal, her only field-goal attempt, the week before in a 32-point win over Valley Stream Central.

"I think the idea of playing on the football team has always seemed like a great opportunity – I’m just glad it’s finally working out this year," she said. "I know I am not the first girl who ever did this, but I’d like to be that role model for a little girl or someone else. I want people to see anything is possible and for me to say I was the varsity football kicker, that’s making a kind of big statement. That’s what’s always really intrigued me about it."

On the soccer pitch, Accordino plays defensive midfielder and has two assists for the Generals (12-0-2), who are seeded No. 1 in the Class A tournament and beat Bethpage on Thursday 5-1 in the semifinals of the Nassau Class A playoffs. The team has allowed only two goals this season, thanks in large part to Accordino’s defensive prowess. MacArthur girls soccer coach Jamie SanFilippo described her as "the storm door that protects your front door from the elements."

"I could tell she was going to be good at this," Generals football coach Bobby Fehrenbach said. "You could see it in the way the ball comes off her foot. She’s not just making it over the bar, she’s striking them well. . . . And she’s a great example as a player, putting in the extra work to try to be as good as she can. I think a lot of the other players see that and they can’t help but respect it."

Accordino’s kicking acumen and hard work off the field has led to her becoming a valued teammate.

"I watch her at the games and, after she makes a kick, every player comes over to give her a fist pound," said her father, Chip Accordino, a retired Nassau County parole corporal. "I might have been worried a little bit about it, but they all really just see her as a good teammate."

That is not to say that Accordino hasn’t heard a few choice words from opposing teams. "I’ve heard players on other teams make remarks about me being a girl or that girls don’t belong in football or on a football field," she said. "But it really hasn’t been anything nasty."

"She has always blazed her own trail," said her mother Diane Accordino, a nurse at a Long Island hospital. "She’s humble. She knew what she wanted to do, and she did. That’s how she is."

Chip and Diane probably could have seen something like this coming a long time ago. As a youngster, they enrolled her in girls soccer early and by age 9 she was good enough to play for a travel team.

"But when she first found out that there were girls playing hockey (around age 14) she was actually a little ticked off – these are the kinds of things she wants to do," Chip Accordino said.

Accordino has been suggesting to her coach that she kick since she was a sophomore. Fehrenbach said he didn’t consider it because the Generals had good kickers and the coach was hesitant to encroach on Accordino’s soccer responsibilities.

During the summer, however, Accordino and Gino Fundaro, her boyfriend and a senior tight end/defensive end on the football team, were getting in some cardio work at MacArthur’s football field when he suggested she try a few extra points.

"I held for her and she really drilled them. We kept moving back a little," he said. "I knew that she is one of the more physical players on the soccer team, so I thought she might be up to it. Plus we needed a kicker."

"It takes time to become consistent," Accordino said. "And I know that soccer kicking and football kicking aren’t exactly alike."

She sought out Justin Norcini, a former MacArthur football and boys soccer player who had planned to be the placekicker this season for LIU before suffering an injury.

"She has a big leg and she approached the ball strong," Norcini said. "But football is more of a straight-on kick where soccer is a little more across your body. She loved every minute of working on her technique. I could tell she was super-excited to do this."

One nice coincidence is that Norcini’s training helped Accordino get into the record books this season. She tied Norcini’s mark of seven PATs and broke the school record with 10 total points on kicks in one game.

Accordino said her role model was Sarah Fuller, the Vanderbilt soccer player who went on to kick for the Commodores football team "because she did this at the very highest level."

One of the great surprises that came after Accordino’s March 20 debut is that she posted some photos of the extra points on Instagram and Fuller responded.

Accordino paraphrased the message as ‘Congratulations and keep doing what you’re doing," but said that one day she’d like to have the same sort of impact on an aspiring girl.

This season may be the end of the road for Accordino’s place-kicking career. In the fall she will attend King’s College in Wilkes-Barre, Pennsylvania. She will enter a five-year physician assistant program and plans to play on the Division III Monarchs’ women’s soccer team. Coincidentally, the King’s College football team already has recruited a place kicker – who is also a woman.

"I might still put together a video of my kicking for them," Accordino said, "because you never know."

“I know I am not the first girl who ever did this, but I’d like to be that role model for a little girl or someone else.”