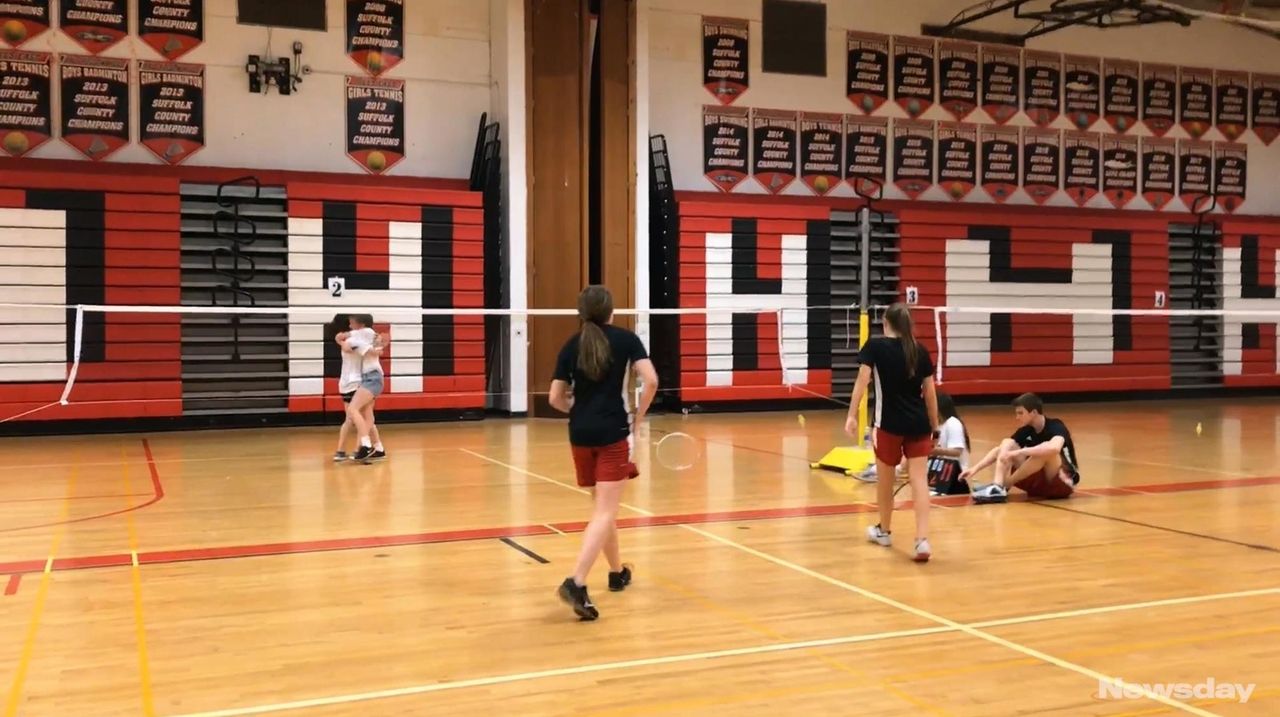 Commack's Emily Haber on Tuesday discussed her friendship with opponent Sophia Castellano of Lindenhurst after her Suffolk girls badminton individual championship win. Whitman doubles champions, No. 2 Mae Latko and Lauren Brown, spoke about their title over top-seeded Half Hollow Hills and plans for college -- both will be attending the University of Delaware in the fall. Credit: Newsday / Melissa Kramer

You would never know they were playing for a county championship.

After becoming friends while on the same volleyball club in Bethpage two years ago, Commack’s No. 3 Emily Haber won the Suffolk girls badminton Individual championship, 11-2, 11-8 over No. 4 Sophia Castellano of Lindenhurst at Half Hollow Hills East on Tuesday.

Following the final point, the two embraced with a hug.

“It feels good,” Haber said on the win. “Sophia is really good so it was fun because we are friends and I got to play her. It was a good match.

“Ever since [meeting at volleyball] then we just continued to be friends so it was fun to get the chance to play her for the county championship,” Haber, who is 33-0 in her career, added.

On the second court, best friends since first grade and attending the University of Delaware together next year, the Whitman girls badminton duo of No. 3 Mae Latko and Lauren Brown finally won their Suffolk doubles title.

“It’s so surreal,” Brown said. “We’ve been doing this for four years and we finally took it, finally.”

The duo defeated top-seeded Jolie Greenbaum and Sydni Berkenfeld of Half Hollow Hills, 12-15, 15-10, 15-11, after falling the previous six times in the last three seasons combined.

“We didn’t give up because we lost the first match and we came back the second and third,” Latko, who has the most wins in program history (60), said.

In an emotional tribute to former Whitman coach Vincent Altebrando, who passed away on April 20 from an autoimmune disease, Latko and Brown wore shirts, created by teammate Taylor Martino, in his memory during their title win.

“He was one of my best friends,” Whitman coach Scott Wolf said.

“Mae and Lauren said they want to dedicate the season for Coach and they were going to be playing for coach this year,” Wolf said. “That obviously means a whole lot to me . . . To end the year with a county title was pretty special.”