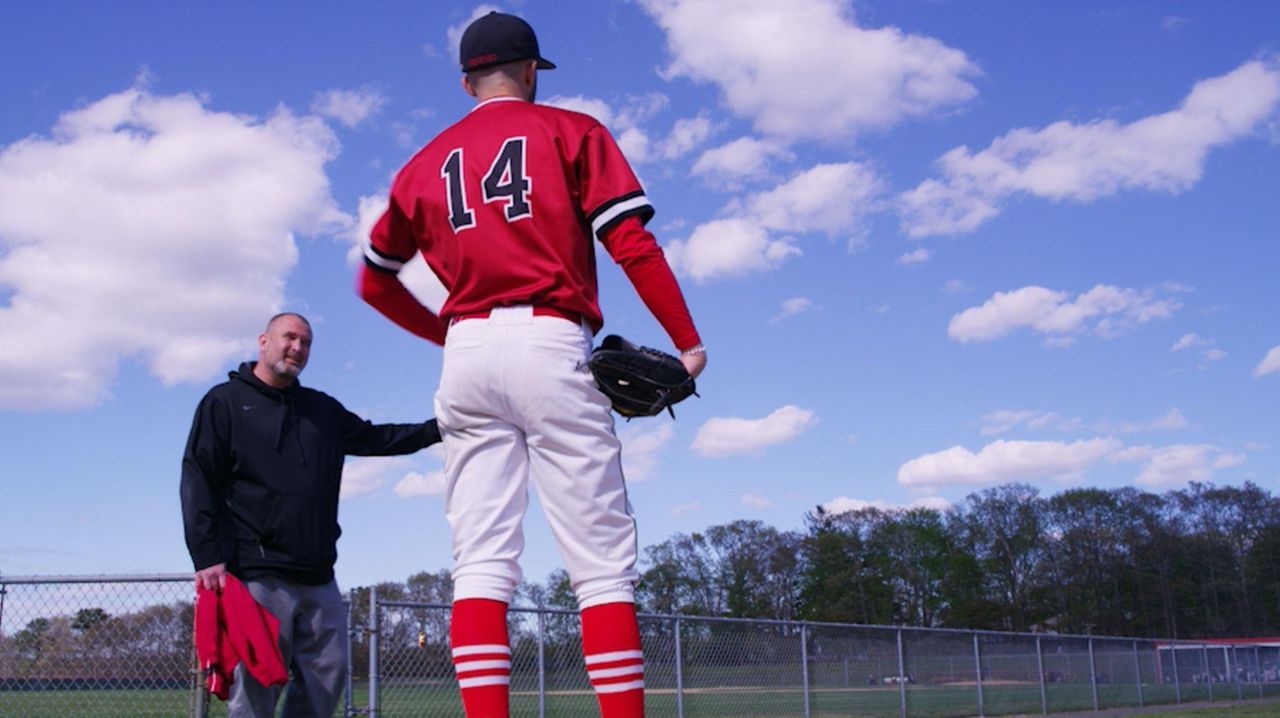 Former New York Mets pitcher Bill Pulsipher is hoping to pass on his knowledge to his son Liam, who is a starting pitcher for Center Moriches High School. Credit: Newsday

Bill Pulsipher’s hands are sweating, and the pressure is intense, much like when he himself was on the mound under the watchful eye of tens of thousands of people.

His son, Liam, is pitching for Center Moriches High School and the Mets’ former can’t-miss prospect can’t bring himself to watch from the stands.

Pulsipher prefers to walk around on a grassy hill some 25 feet behind home plate, often clutching a wash cloth to keep his sweaty hands dry.

He says he likes the vantage point.

He also likes its solitude.

Being a father of a pitcher can be stressful — even for someone who pitched in 106 major-league games.

“You’re still riding the emotion of every pitch, just as you would be on the mound,” Pulsipher said during one of Liam’s outings last month. “You just don’t have the ball in your hand.”

“But at the same time I know I’m not out there — he is — and you’re just hoping everything goes well. That’s not because I played. That’s how it is for all parents. It’s stressful wanting your kids to do good, for themselves.”

Then Pulsipher excused himself and returned to his spot on the grass. Liam was about to pitch again.

For fathers, the line between pushing your children to succeed and reliving your past through them can be slippery. As a talented lefthanded pitching prospect whose career fell far short of expectations, Bill Pulsipher could have easily fallen victim of the latter.

The life of Pulsipher, 43, who works in road construction and gives pitching lessons on the side, is a far cry from what he thought it would be like two decades ago when he was an annointed future major-league star.

Pulsipher lived on Long Island at various times throughout his career. His wife, Michelle, was raised in West Babylon and they lived on the South Shore during his time with the Mets and Ducks. They moved to Long Island full-time in 2012 and settled in East Moriches.

He says time has given him the perspective to appreciate his career and that his failure to live up to expectations helps him be an understanding father to a son who is also a talented lefthanded pitcher.

“I definitely look at my career as a cautionary tale,” Bill said, “and he’s been able to live that cautionary tale for the first 16 years of his life.”

To understand Liam’s upbringing, first get to know his dad.

In 1995 Pulsipher was a top prospect with a brash attitude. He and fellow pitching prospects Jason Isringhausen and Paul Wilson were nicknamed “Generation K” — and Mets fans ate it up. The trio even posed for a poster under the headline NYPD: New York Pitching Department.

In one of the first Newsday stories about Pulsipher in the 1990s, young Bill is quoted as saying he’s been telling everyone in the Mets organization this: “You’ll never find another of me.”

In another story, Mets manager Dallas Green admonishes the rookie by saying he’s instructing him to “dominate with his pitching instead of his mouth.”

But Pulsipher injured his elbow after his first season, suffered what he termed anxiety issues during his rehab and never fully recovered his fastball. When he burst onto the scene in 1995, he thought he was headed for the Hall of Fame.

When Pulsipher is reminded of the brashness that rubbed some in the baseball world the wrong way, he doesn’t flinch. That was who he was then, he said, not who he is now. And that’s certainly not how he has raised his children to be.

“I thought I was a Michael Jordan-type, naively, obviously,” Pulsipher said, matter-of-factly. “But I didn’t know any better. I didn’t really have someone like myself who has been through this type of thing to change that thought process . . .

“Liam is the complete opposite.”

Liam, who will be a senior in the fall, is soft-spoken and respectful, the type of teenager who doesn’t have a problem looking adults in the eye when he is talking.

On the mound, he’s calm and composed.

Asked to describe himself, Liam says he’s somewhere in between “mellow” and “cocky.”

“I like to say confident,” he said, with good reason. Having already verbally committed to pitch at Stony Brook University, he performed during his junior season as if there was no pressure on him.

He went 5-1 with a 0.68 ERA and .75 WHIP, allowing only three earned runs in 40 innings during Center Moriches’ regular season. In his final performance of the season, with his team facing elimination, Liam threw a two-hit shutout with only two walks.

“Bill’s not into feeling bad for yourself,” Donovan said. “He obviously understands failure is a part of the game. And what sets you apart is how you’re going to handle that failure. Are you going to respond? Or are you going to let it get you down?”

Donovan said a high school baseball coach spends a lot of time building players up after a bad game. “With Liam, it’s not like that,” he said. “Liam is good with thinking, ‘OK, next at-bat, or next inning, or next game, let’s go.’ That’s what really sets him apart in my view.”

A LEFTY, OF COURSE

Liam believes “it’s in my blood” to be a baseball player. It’s also in his name.

When Liam was born in 2000, the once-promising baseball career of his father was spiraling in the wrong direction. With his baseball future uncertain, Bill Pulsipher wanted a way to remind his sons who their father once was.

So he and his wife, Michelle, named their first son Liam Hayden Pulsipher and their second son three years later Leyton Hale Pulsipher. LHP, of course, is the common baseball acronym for lefthanded pitcher.

“At the time I was kind of in-and-out of playing, in the big leagues and out of the big leagues, am I still playing or am I not?” Bill said. “I thought I want them to know who their father was.”

Liam, as fate would have it, turned out to be a lefthander.

Bill acknowledges this gave him great pleasure. Of course he envisioned his son becoming a pitcher, rising through the baseball ranks just as he did.

But Bill said he knew this was Liam’s life to live, not one for him to live vicariously through.

Yes, he introduced him to baseball at an early age, coached his teams and worked on intricacies of his pitching delivery in a way most fathers wouldn’t know where to begin. But Bill said he remained mindful that he didn’t want to “force-feed” baseball.

“We don’t sit down and watch the old videos and I don’t talk about the old times all the time because life goes on,” Bill said, “and he’s got his thing to do.”

LET’S GO TO THE TAPE

Liam said he doesn’t know much about his father’s career. He said he has a bunch of baseball cards of his father, some of his old gloves (which he uses in games) and he has seen pictures. Liam said he may have once seen a video of his father pitching for the Milwaukee Brewers, but he wasn’t sure. But he’s certain of this: He hadn’t seen his father pitch for the Mets.

That, however, has since changed.

At Newsday’s behest, Bill found some VHS tapes, including one of his first major-league victory, which came against the then Florida Marlins on June 27, 1995.

“If I’ve watched this, it was probably right after the game,” he said. “Definitely not since.”

Newsday had the tape transformed into digital format and father and son agreed to watch the broadcast at the newspaper’s Melville offices.

Liam was struck by a couple of things: how skinny his father was at 21 years old, how similar their leg kicks looked but also how different their fastballs moved. The video showed Bill’s fastball cutting in toward righthanded hitters while Liam says his tails away.

Liam laughed at his father’s batting stance — which dad said he modeled after Don Mattingly — and also got a kick out of his father’s mound presence. Bill always was moving around on the mound, walking and talking, sometimes to himself.

“You figure I’m used to watching him pitch but I’m really not,” Liam said. “It’s kind of shocking to me watching my dad on TV. Its eye-opening.”

Then Bill looked at his son sitting next to him, evidence enough that this game they were watching was in fact a generation ago. At this point Liam’s eyes were still locked on the projector screen, clearly stuck on a thought.

Some things run along family lines, and Liam is thankful.

“I think about it every once in awhile, that it’s like hitting the lotto,” Liam said. “Like with all the people out there in the world, I was born with him as my father. It’s lucky.”

Generation K was the nickname given in the mid-1990s to Mets pitching prospects Bill Pulsipher, Jason Isringhausen and Paul Wilson. Pulsipher was the first to make his debut; Saturday marks its 22-year anniversary. But it was a short-lived run, as injuries short-tracked their time together. They combined to win 31 games with the Mets -- a far cry from what many expected them to do -- and by 2000 they were all traded or released. Isrignhausen had the best success among the three, compiling 300 saves in a 16-year career with the Mets’ A’s, Cardinals, Rays and Angels.

Jim Baumbach is an award-winning investigative reporter at Newsday, where he has worked since 1998. He also is the student newspaper adviser at St. John's University.