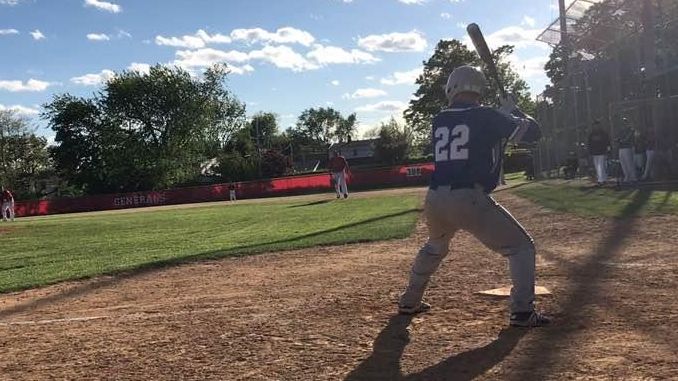 No. 11 Division defeated No. 6 MacArthur, 5-1, in the first round of the Nassau Class A baseball playoffs at MacArthur High School, on May 15, 2017. (Newsday/Owen O'Brien)

There’s no shortage of emotion when Brandon O’Brien takes the field for Division baseball.

Whether he’s throwing his arm in the air after hitting a double, hopping off the mound after a strikeout or looking for the first teammate in sight to hug after the final out, O’Brien knows only one way to play.

“It just motivates me to get better every day,” O’Brien said. “And prove to my boys and my team that I want to win as much as they do.”

O’Brien tossed a five-hitter with two walks and two hit batters on 111 pitches in a 5-1 victory for No. 11 Division over host No. 6 MacArthur in the first round of the Nassau Class A baseball playoffs on Monday.

“OB’s just lights-out,” said teammate Vinny Inciarrano, who had two sacrifice flies in the win. “When he gets on the mound, if we put up a couple of runs, we’re in good shape because he just dominates out there.”

With the score tied at 1 entering the sixth inning, Division’s Hunter Traenkle led off with a double. DJ Melgar followed with a single to put runners on first and third. Jayson Melgar, DJ’s younger brother, followed by ripping a single over the second baseman’s head to drive in pinch-runner James Horodecki and give Division a 2-1 lead.

“I was just trying to make contact with the ball, get it in play any way possible,” Jayson Melgar said. “It felt great. Once I hit it, I knew.”

Steven Horodecki followed one batter later with an RBI single. Inciarrano’s sacrifice fly made it 4-1, capping the three-run inning. The Blue Dragons added their final run in the seventh on Horodecki’s sacrifice fly that drove in Sean Paprocki.

O’Brien took the game over from there, allowing only two baserunners in the final two innings, recording four of his five strikeouts over that time.

“He’s got the ‘it’ factor,” coach Tom Tuttle said. “It’s almost Derek Jeter-esque. He’s the kind of guy that nothing rattles him.”

With the two Levittown schools separated by only 2.6 miles, the atmosphere at MacArthur High School was about as lively as you’ll see for a first-round playoff game.

“It was a huge thing,” Inciarrano said. “We’re crosstown rivals and it was a big win and we were just amped up to play them. They’re a great team but we came away with a win.”

Said DJ Melgar: “In school, you can’t even pay attention. You’re looking at your watch getting ready to play.”