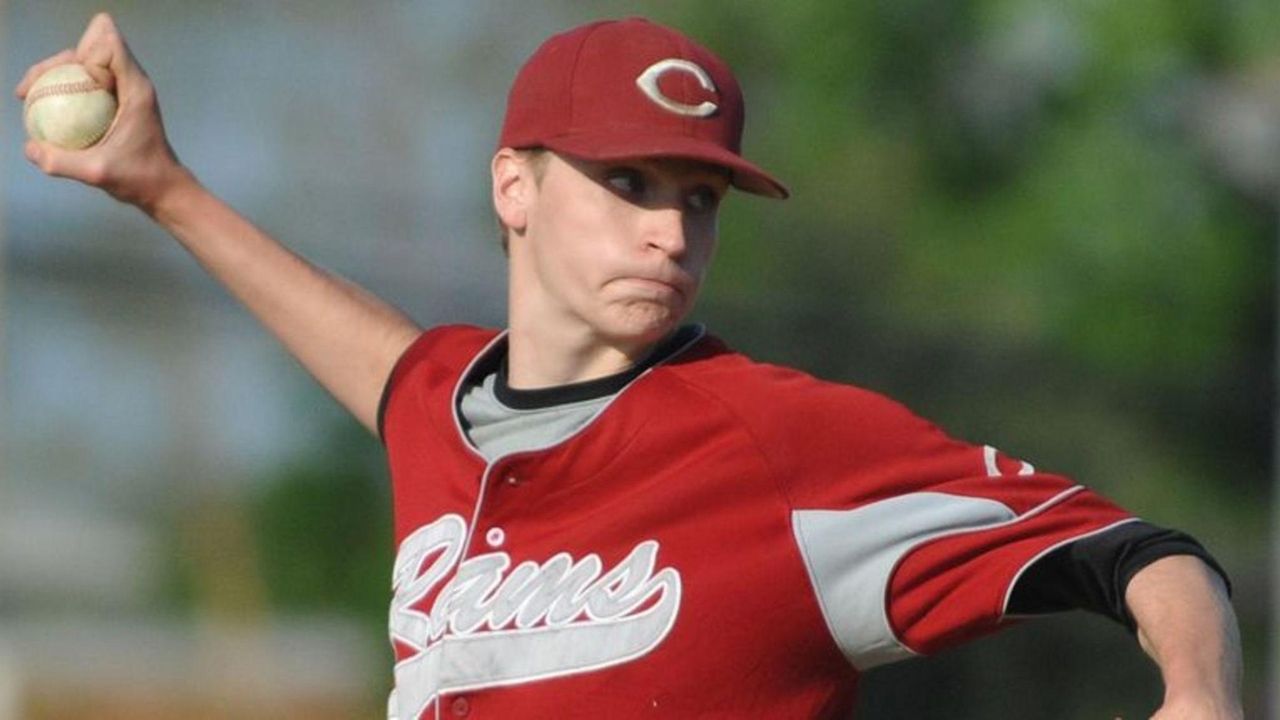 Chris Lydon had a walk-off single in the seventh inning as Clarke defeated visiting Mineola, 1-0, in Nassau A-IV baseball on Monday, May 7, 2018. Credit: Newsday / Owen O'Brien

Clarke righthander Brendan Turton and Mineola lefthander Chris Wiercinski were playing a game within a game.

As the shutout innings increased and the strikeout totals rose, there was one number not moving much — the opponent’s hit column. The two aces traded shutout frames through six innings, until Mike Rod riguez’s leadoff double in the seventh inning led to Chris Lydon’s walk-off single that drove in Tyler Cox as host Clarke defeated Mineola, 1-0, in Nassau IV baseball Monday.

“Competing against each other, seeing who has the upper hand, it’s just fun out there,” Turton said. “I know Chris is a really good pitcher.”

But in the end it was Turton outdueling Wiercinski, with the help of timely hitting. Turton tossed a three-hitter with one walk and five strikeouts and Wiercinski allowed two hits — zero through six innings — with no walks and nine strikeouts in 6 1⁄3 innings.

“He was just phenomenal,” Clarke coach Tom Abruscato said of Turton. “He was just pitch-to-pitch. Both kids went at it and it was an outstanding high school baseball game.”

Rodriguez’s double on an 0-and-2 count started the inning in which Clarke had the bases loaded with nobody out. After a strikeout, Lydon hit a hard ground ball past a diving shortstop with the infield in for the game’s lone run and he was promptly charged by his teammates in celebration.

“There’s nothing better,” Lydon said. “Being able to do this for my team, my brothers, it’s the best feeling ever. I wanted to do it for [Turton] as much as anyone else on this team would. He pitched his butt off.”

With Clarke and Mineola battling at the top of the conference in the final week of the season, the Rams improved to 11-5 and the Mustangs fell to 13-3.

The Rams had additional motivation Monday after learning about the passing of 31-year football coach John Boyle, who died late Saturday night after a nearly five-month battle with pancreatic cancer at age 60. Abruscato said the team didn’t have a formal conversation about Boyle before the game, but the players said it was a topic discussed during the day at school.

“He was our dean, he was in there every day,” Turton said. “It’s tough, but it’s good to be out here for him and win a Rams ballgame.”