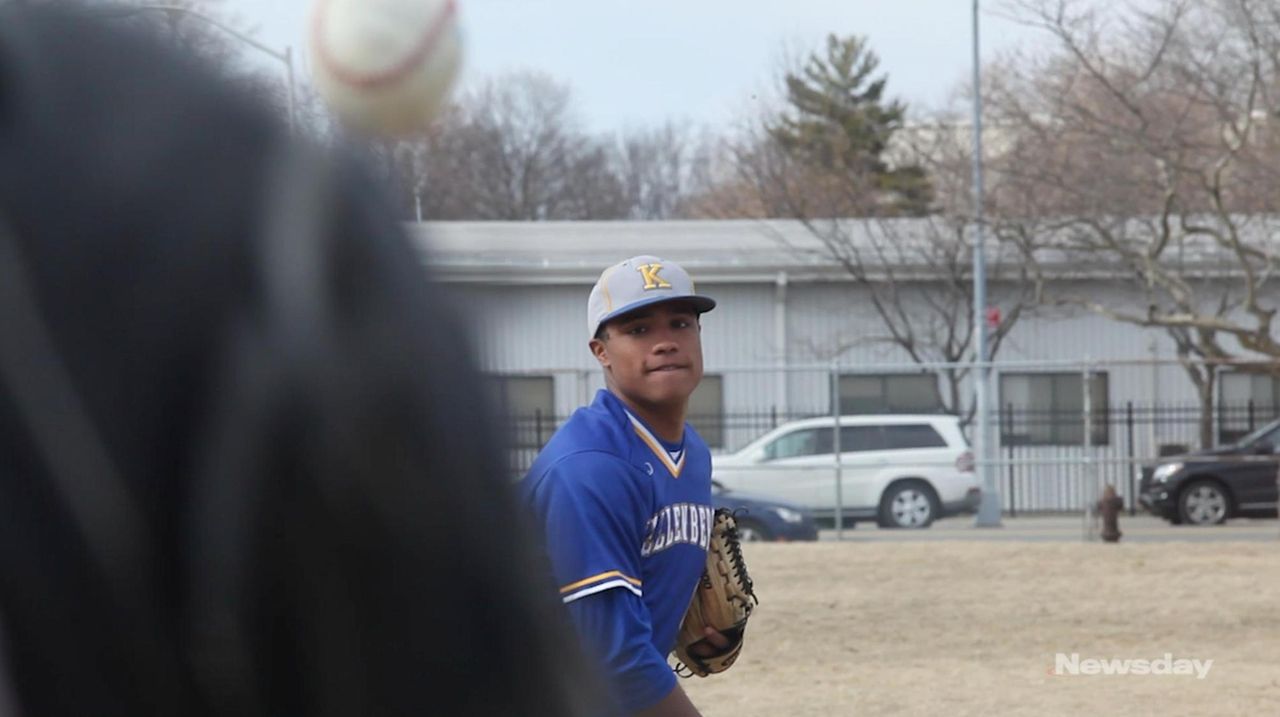 Kellenberg senior pitcher/designated hitter Jason Diaz has committed to play at the University of Miami next year, but there’s a good chance the 18-year-old will be selected in June’s MLB draft. Newsday followed the star athlete from the halls of his high school to the baseball diamond for a scrimmage against Queens’ Cardozo on March 19. Credit: Newsday / Casey Musarra

When Jason Diaz began his freshman year at Kellenberg, he was a mystery man. By the end of his sophomore year, he’d become the phenom that pitched the Firebirds to a second straight CHSAA championship. He begins his senior season this week as Long Island’s most recognizable pitcher and a guy facing a decision every ballplayer would want come June.

Diaz will have to decide if he wants to join a major league organization or play for the hallowed University of Miami Hurricanes.

“I don’t see [that decision] as a dollars game,” Diaz said. “I’m going to think whatever they give me is what I deserve. And I am going to have the opportunity of Miami. I’m blessed.”

Diaz first came to the attention of Kellenberg baseball coach Chris Alfalla through a series of phone calls in October of 2015. All were inquiries about the new kid that had just enrolled at school with the 90 mph fastball. Alfalla hadn’t met him and came out of the calls with only a name: Jason Diaz.

They’d first met and had a conversation in a class, but things got real after baseball tryouts when junior varsity coach Pat Miles said “you’ve got to see this kid throw, man,” Alfalla recalled.

“You knew he had the velocity and the command. He had a pretty good breaking ball, too,” Alfalla said. “[It] was varsity level stuff. We’d never had anybody who threw that hard on JV baseball.”

Alfalla needed to petition the school’s administration to waive its policy of underclassmen such as the sophomore Diaz not being allowed to play on the varsity. He explained that his letter said “it’s dangerous for him to play JV baseball — more for kids on the other teams. It’s just not fair. He’s on another level.”

The administration agreed that his proper level was varsity.

When Diaz’s turn in the rotation fell on the championship game, Alfalla eschewed using a more experienced pitcher because, he said it was “a perfect opportunity . . . for everybody to see Jason Diaz at his best.” Diaz pitched a one-hitter with 10 strikeouts as the Firebirds captured the title.

Diaz, the middle of three children to parents born in the Dominican Republic, began playing baseball as a toddler and saw plenty of success in youth baseball. However, he never saw himself as different from the other kids until that Kellenberg tryout in the spring of 2016.

“All I heard was people saying my name. It was just my name, my name and everyone was talking about me,” he said. “I was like ‘why am I the only person being spoken about? All these other kids were working as hard as I do.’ From that point it was colleges being interested and [MLB] teams sending me questionnaires. That’s when I realized that I am not the same as everyone else.”

It’s certainly true on a baseball diamond. Diaz has a blistering four-seam fastball that can creep into the mid-90s. He has a wipeout slider that he throws with an unorthodox grip, a two-seam fastball that dives and a “plus’ changeup. In two varsity seasons he is 9-2 with a 1.29 ERA and 112 strikeouts in 69.2 innings.

But Diaz also is unique outside the lines.

Many afternoons and evenings he works with his parents at their Dominican restaurant, Higuey Café in Franklin Square, doing deliveries because, he said, “I want to help out where I can because they work hard.” His father works in construction and is at the restaurant in time for the dinner hours; his mother works as a nurse before heading to the restaurant.

The 18-year-old also is a person of faith and this school year has been serving as a Marianist mentor to Kellenberg’s freshmen.

“There’s so many kids in our school — maybe 500 to a class — and you notice not everyone is coming from the same [place]. Some kids aren’t socially advanced as other kids so . . . I help our freshman,” Diaz said. “I go in there four days a week and sit down with them and make sure they feel comfortable and see whether they have any questions about a club or activity or a sport . . . I feel like I am doing a lot there.”

“His impact during school with younger students — they all look up to him. He’s a huge star and then the kids meet him and he’s shaking their hands,” Alfalla said. “He’s humble. He’s gracious. He’s a kind person. And they’re looking up to this guy and he’s a genuine person.”

“Jason is sort of the ideal,” Kellenberg athletic director John Fechtmann said. “He’s the person you look at and want to say ‘that’s what you really want.’ It would be easy for him to identify himself as just a baseball player . . . He’s a great ambassador for our school.”

Never more so, though, then in baseball.

“Jason’s impact on the program? Since he’s been here, everybody’s known about him,” Alfalla said. “It’s put Kellenberg on a level — if you’re serious about baseball, this is where you want to go . . . He’s really put us on the map.”

Diaz is going to be on the map, too. Maybe it’s a year from now in a big-league organization. Maybe it’s with Miami in the college tournament. Either way, Diaz’s senior season will be something for everyone on the Island to keep an eye on.

With Gregg Sarra and Casey Musarra

“I’m going to think whatever they give me is what I deserve.”