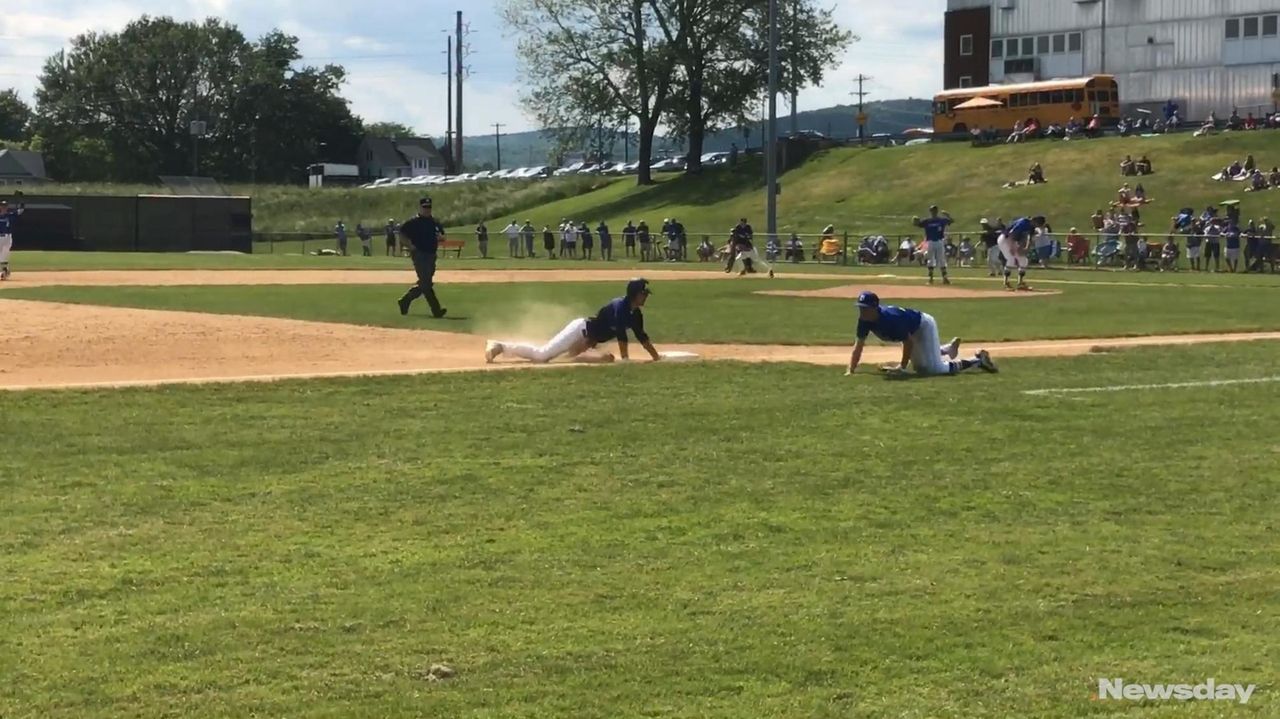 Massapequa defeated Horseheads, 5-1, in the baseball state Class AA semifinals at Union-Endicott High School in Binghamton on Friday. Massapequa pitcher Christian DeNave discusses getting out of a bases-loaded, no-out jam with three grounders back to the mound in the fifth inning. Credit: Newsday / Owen O'Brien

The Massapequa pitcher faced the bases loaded with no outs and the middle of the Horseheads lineup due to bat in the top of the fifth inning. But DeNave told himself to keep his composure and rely on the fielders behind him.

Only DeNave was wrong. It turned out all he needed was himself and his catcher, Andy Primm, as the senior induced three ground balls back to the mound. He threw home for the force out each time as the Chiefs escaped the inning without allowing a run, still trailing by one.

“It was a really tough situation to be in and I was just trying to get them to put the ball in play in a position where our fielders could make the play,” DeNave said. “And it just happened that they all came to me.”

The Massapequa offense took over from there, scoring the tying run on Phil Cottone’s RBI double in the bottom of the fifth, followed by a four-run outburst in the sixth inning as Massapequa defeated Horseheads, 5-1, in the state Class AA baseball semifinals Friday at Union-Endicott High School.

“I’ve never seen anything like that,” said third baseman Johnny Castagnozzi. “He had the power and everything just to get through that and focus on getting each guy out one by one and that’s what happened. That got us going for the rest of the game.”

Massapequa (21-6), which won its 16th in a row, advanced to its second straight state final and will play Baldwinsville at 1 p.m. Saturday at Binghamton University. Horseheads finishes 19-4.

The Chiefs’ four-run sixth began with Castagnozzi’s energetic baserunning. After walking and advancing to second on Mike Grisanti’s single, he broke for third on a ball blocked by the catcher. The throw went into the outfield and he scored the eventual winning run.

“You can’t play scared and worried,” Castagnozzi said. “You have to play with a lot of aggression and that’s what this whole team is about.”

Wade Kelly followed with a sacrifice fly that drove in Grisanti to give the Chiefs a 3-1 lead in the sixth. Nick Schwartz’s double drove in Aidan Cooney and Cottone for the game’s final runs.

“We have such a great team, such a great bond this season,” Schwartz said. “It doesn’t come to us easy. We have to work at it and we’ve worked very hard this year.”

At the forefront of the work is DeNave, who Castagnozzi said can be found running unprompted during practice. Coach Tom Sheedy said DeNave was slated to be in the bullpen at the beginning of the season. But the senior worked his way up the rotation, becoming the team’s ace. He pitched the clinching win in the county final, Long Island Class AA championship and now has sent the Chiefs back for a chance at a state title. He pitched a complete game on Friday.

“Every year we have that ace guy and the amazing thing is, Christian wasn’t supposed to be that guy,” Sheedy said. “It just shows how determined our kids are. He said, ‘Hey you know what, this team needs an ace and I’m going to be the ace.’ ”