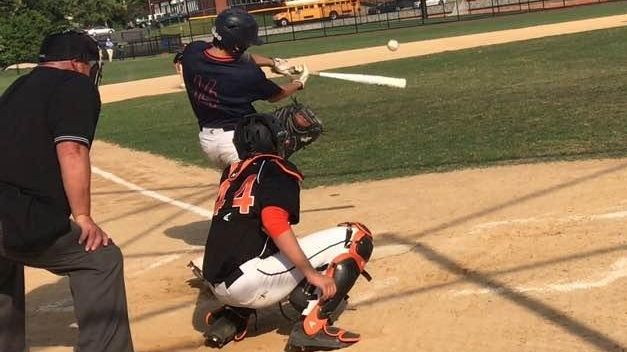 Manhasset defeated Carey, 5-2, at Carey High School, on Friday May 19, 2017, to advance to the Nassau A baseball semifinals, (Credit: Newsday/Owen O'Brien)

Don’t underestimate the Manhasset baseball team, even though the players don’t mind it at all

“I think that being an underdog in the playoffs has really brought a lot of motivation to this team knowing that no one expects us to win,” said Jack Zaffiro, who has mostly pitched out of the bullpen this season but tossed five innings and recorded the win as No. 17 Manhasset defeated host No. 2 Carey, 5-2, yesterday to secure a spot in the Nassau Class A baseball semifinals starting Monday. “We’re just coming out and trying to prove that we’re better than what people think that we are.”

“We were the [17th] seed, but we knew we weren’t really a [17th] seed, we just had a few rough games,” said shortstop/pitcher Rob Giovanelli. “We had a tough bracket. We just came in here thinking we were going to fight with the teams that don’t really know that we’re good.”

Giovanelli provided the game-defining hit batting cleanup. Trailing 1-0 with the bases loaded in the fourth, Giovanelli launched the second pitch of the at-bat over the leftfield fence to give the Indians a 4-1 lead. Brendan Barry’s leadoff walk followed by Jeff Torborg’s single and a two-out walk by Jamie Weiss set up the grand slam.

“Going into that at-bat, I was telling my friend, ‘Hopefully Jamie walks and I’ll crush the first pitch I see,’ ” Giovanelli said before rephrasing: “The first hittable pitch that I got. It just went out and I knew right off the bat. It was a great feeling.”

Manhasset (14-9) hasn’t lost a game all postseason, advancing to the semifinals with a 4-0 record, despite getting swept to end the season and leaving its playoff fate unknown.

“We were just hoping for a shot,” coach Mark Giardino said. “We needed one win the last week of the season to get in and we didn’t get it and when we got in, we felt like we had a second life.”

Carey (15-8) didn’t go down easily. The Seahawks’ first three batters of the seventh inning reached base — Antonio Roselli was hit by a pitch, Vic DeNicola singled and Tyler DeMeo walked. But Giovanelli, working his second inning of relief, got two strikeouts before getting the final batter to groundout.

“We’ve been underestimated again,” said Barry, who was moved up to varsity as a sophomore when Manhasset made the semifinals as a No. 13 seed in 2015. “It’s great to see this band of guys together. It’s just really awesome and definitely a motivational factor.”

“Facing adversity is when we play our best and [Giovanelli] showed that today,” Giardino said. “Bases loaded, no outs, he doesn’t give up a run. That’s what this team has been about all year and obviously it’s continuing.”