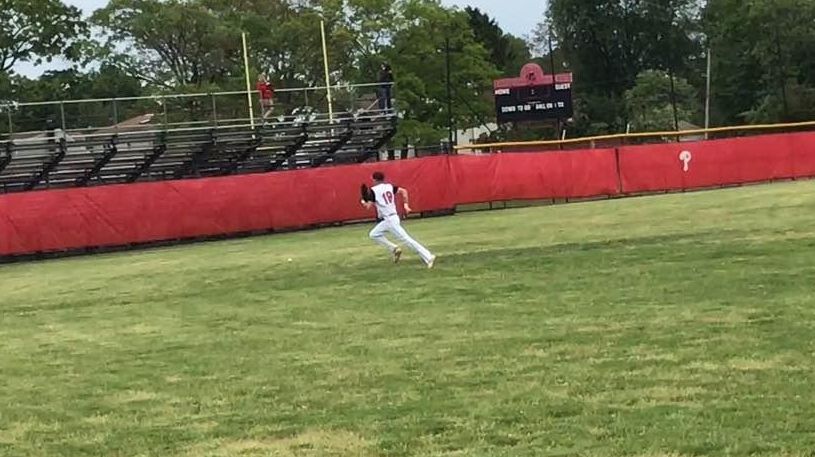 Division defeated Plainedge, 8-1, advancing to the Nassau A semifinals, at Plainedge High School, on May 20, 2017. (Newsday/Owen O'Brien)

When it’s Sean Paprocki sprinting down the first-base line, a routine ground ball quickly can turn into havoc.

“Run. Run as fast as you can,” Paprocki said of the infield single that helped ignite Division’s seven-run third inning Saturday. “The coaches preach hustle. I knew I had a chance because it was going up the middle so I just booked it out of the box, tried to get there as fast as I could. When they called me safe, I was so pumped up.”

Paprocki’s RBI single was only the beginning. The next seven batters also reached base during No. 11 Division’s 8-1 victory over host No. 3 Plainedge as the Blue Dragons secured a spot in the Nassau Class A baseball semifinals.

“We’re not afraid to fail, so we’ll compete,” coach Tom Tuttle said. “Words can’t describe it. It’s like you take a punch in the gut, you got to fight. You got to come back and back.”

Division (17-6) will play at No. 9 Wantagh (17-4) in Game 1 of a best-of-three series at 4:30 p.m. Monday. Wantagh is the defending state champion, but Division won two of three games against the Warriors this season.

Division ace Brandon O’Brien wasted little time taking control of the game. After allowing an unearned run in the first inning, O’Brien tossed a three-hitter with one walk and six strikeouts. He retired 12 straight batters from the second to the fifth innings during his seventh win of the season.

“After the first inning, I knew it was our game,” O’Brien said. “I knew the runs were going to come. We were all hyped up. We wanted to get this win and show them we’re legit, and we did today.”

The Blue Dragons’ game-defining third inning was started and continued by Vinny Inciarrano, who had a leadoff single and later delivered an RBI single.

“We always talk about just pass the baton to the next guy,” Inciarrano said. “So I just had to do my job and know maybe it’ll get back around and I’ll have to do it again.”

After Paprocki tied the score at 1-1 with his infield single, he scored on Hunter Traenkle’s double. DJ Melgar singled and Jayson Melgar’s two-run double gave Division a 4-1 lead. Steven Horodecki followed with an RBI single before Sean O’Regan worked a walk, and both scored when Inciarrano’s RBI single was misplayed in the outfield.

Jayson Melgar’s RBI single in the seventh gave him three hits and three RBIs. Before his final at-bat, the crowd serenaded the 17-year-old with “Happy Birthday.”

“My heart was racing because it’s my birthday, so I was all amped up,” he said. “It’s the best gift I could ever get. Going to the semis, it’s amazing.”