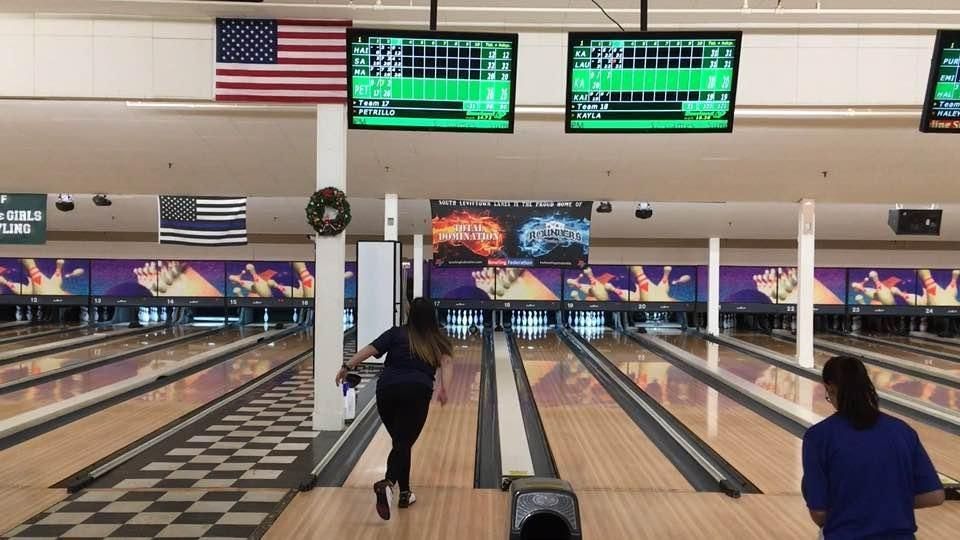 Division’s Lauryn O’Keefe stared down a 7-10 split in the ninth frame of the opening game.

“One’s better than none,” she said with a smile as she received high-fives from teammates, along with support from MacArthur, after knocking the 7 pin down.

Just as it did Dec. 4 against MacArthur, Division took a one-game victory (505-569, 577-514, 563-546) over the Generals on Wednesday at Levittown Lanes. Sportsmanship shined through between the Nassau VII schools separated by only three miles.

“When they did good, we applauded them, and when we did good, they applauded us,” said Kayla DeJesus, who had a high game of 170 for Division (6-3). “Just telling each other that we did great was good.”

Division’s Katherine Oswald had a 150 in Game 2, including a turkey to open the game. She said the Blue Dragons always make sure to recognize when someone rolls a good mark.

Amanda Petrillo had her high game of 212 in Game 3 for MacArthur (7-2). Petrillo, who has been bowling since eighth grade, will attend LIU Post in the fall. She has the highest average in Nassau (202).

During the final frame of the second game, Petrillo switched bowling balls. “The lanes were breaking down and the first ball was meant for heavier oil,’’ she said, “so the second ball is meant for lighter oil, so it just handles the lanes better right now.”

“She’s consistent in and out,” said MacArthur coach Chris Leahy, who called Petrillo a team leader. “It separates the great bowlers from even the really good bowlers. No matter situation she’s in, she’s always consistent.”

Noelle Gaska of Division, who came on as a substitute for the second and third games, surpassed her previous high of 140 with a 144 in the final and deciding game.

Division coach Valerie Carrillo attributed the win over MacArthur last month to the beginning of an upward climb.

“It was the turning point for us, and now we’ve been winning so much since then, so it was a nice little turnaround,” Carrillo said. “It was neck and neck, I feel like. It was a great day today to come out victorious, especially against a crosstown rival.