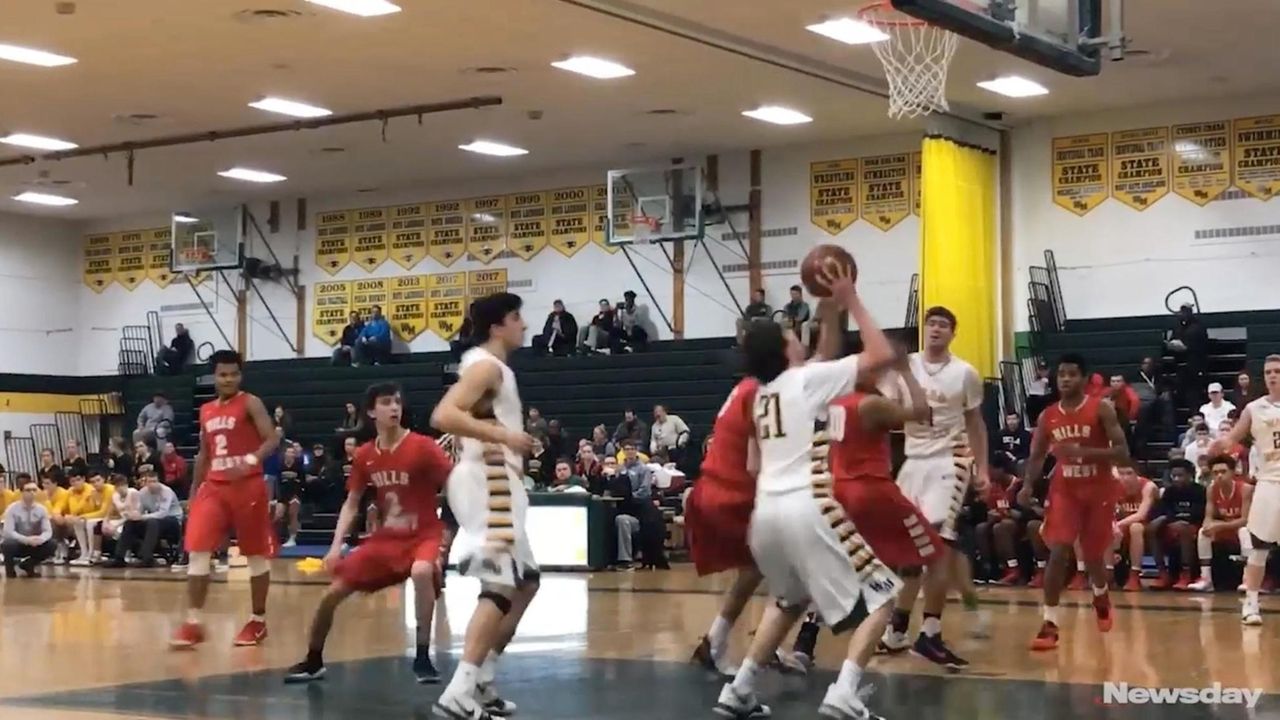 No. 8 Ward Melville defeated No. 9 Half Hollow Hills West, 66-50, in the first round of the Suffolk Class AA tournament at Ward Melville on Saturday, Feb. 17, 2018. Credit: Mike Ruiz

In the era of high-volume offense, the Ward Melville boys basketball team’s primary focus on Saturday was reverting back to basics.

“Defend, defend, defend,” coach Alex Piccirillo said of the game plan following No. 8 Ward Melville’s wire-to-wire 66-50 victory over No. 9 Hills West in the first round of the Suffolk Class AA playoffs. “That would lead to all of our offense. We run the floor and try to get early looks, and we did a good job.”

Ward Melville executed its defense to a tee, limiting Derek Brower Jr., who entered the day as Suffolk’s seventh-leading scorer at 23.1 points per game, to 17 points by the combination of Ray Grabowski and Trevor Cronin. The explosive Hills West guard scored just two points in the opening half before finding a rhythm in the third quarter of what had become a lopsided affair.

“I didn’t want him to have the ball,” said Grabowski, who was also Ward Melville’s second-leading scorer with 20 points, including four three-pointers. “We were denying him, me and Trevor Cronin, and I thought we did a good job.”

“We just tried to tire him out,” Piccirillo said. “If he’s running off of screens and all over the court his legs will go tired and his jump shot gets tired.”

The size of Alex Sobel also created numerous problems for the Colts at the rim. Sobel had 21 points and 10 rebounds, and the 6-8 center also recorded seven blocks.

Ward Melville (17-4) broke away after closing out the first half with an 18-2 run, capped off by a three-pointer by Rick Carbone at the top of the key with five seconds left to take a 43-21 lead at halftime. The Patriots maintained their lead over the final two quarters, entering the fourth up 54-37.

Ward Melville’s balanced inside-out attack of Sobel and Grabowski repeatedly forced Hills West (15-6) to scramble. Grabowski scored 16 of his 20 points in the first half, and Sobel took charge in the second by adding 13 of his 21. Robert Soto tacked on 11 points for the Patriots as well.

The Ward Melville defense will now face an even greater test, as they’ll visit No. 1 Half Hollow Hills East led by Long Island’s leading scorer, Savion Lewis (33.7 points, according to Newsday records), on Tuesday at 4:30 p.m. in the quarterfinals.

“We think we’re one of the teams on the Island that can beat them,” Sobel said.

Grabowski said the Patriots will “do exactly what we did to Derek Brower” to slow down Lewis.

“We’re going to throw the kitchen sink at them,” Piccirillo said. “Lewis is the best player in the county.”