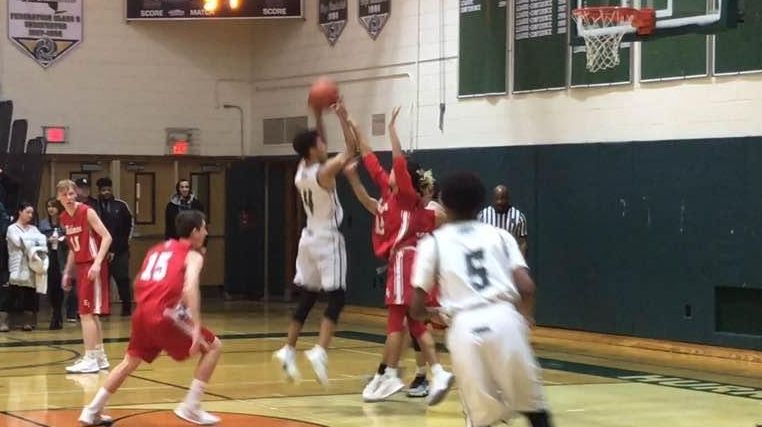 No matter where Westhampton’s Jacob Gaudiello is on the court, he’s the focal point of his teammates and opponents.

Thursday was no different. The senior drove the lane, finished layups, found open teammates and drilled shots from beyond the arc to lead host Westhampton to a 64-54 victory over East Islip, tying the two teams for first place in Suffolk V boys basketball at 11-2.

“He’s a special player,” coach John Baumiller said. “I’ve been coaching over 40 years on the varsity level and you don’t get many special players. He’s one of them.”

Gaudiello had 24 points and is averaging more than 23 points per game.

“He was our best player last year, and from last year to this year, he’s our most improved player,” Baumiller said. “So that’s how hard he works at the game.”

Gaudiello has led the Hurricanes in what could be a special season. They are 15-2 overall after winning 17 total games the previous three seasons, according to Newsday records.

East Islip defeated Westhampton by 20 points in their previous matchup, and the Hurricanes didn’t forget. “They came out and they got a big lead on us [last game] and they just kind of took it away,” Gaudiello said. “We knew we couldn’t let that happen again and we needed to be that team this time.”

The Hurricanes never trailed after taking a 9-7 advantage in the first quarter and built a 30-23 halftime lead.

“We definitely had more motivation to be more physical because last game, that’s how we lost,” Quinlan said. “We were the less physical team, so that definitely helped us out a lot.”

Both teams have three league games remaining in the battle for first place.

“Definitely a confidence boost, but we realize we still have more games to play,” Gaudiello said. “More games that if we lose, we cannot win the league title.”