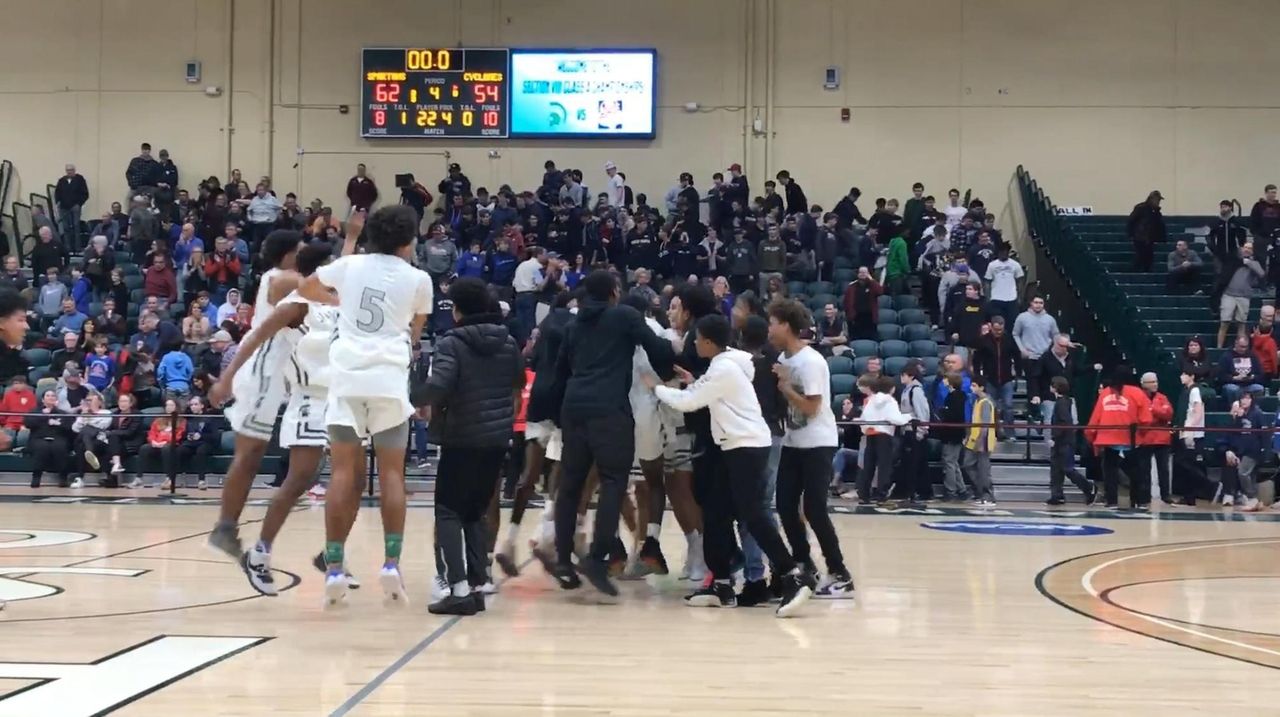 Highlights from No. 1 Elmont's 62-54 victory over No. 3 South Side in the Nassau Class A boys basketball final on Saturday, March 7, 2020. Credit: Newsday / Mike Ruiz

Gus Louis recalled how some of his Elmont teammates already had experienced the thrill of winning a county championship a few years ago.

On Saturday night, it was the senior forward’s turn to chase down his first plaque, and he propelled the Spartans with a championship-worthy performance.

“It took us a long time, but we finally got it,” said Louis, who scored 21 points as top-seeded Elmont took down No. 3 South Side, 62-54, in the Nassau Class A boys basketball final at Farmingdale State, earning the Spartans their first county championship since 2017, which was the second of back-to-back titles.

“I’ve been on this team since 10th grade so this is my first championship with this team,” Louis said. “So I’m just really excited for my team and we’re still not done.”

Elmont (18-4) will return to Farmingdale State next Sunday at noon to take on Amityville in the Long Island Class A championship. The Spartans also extended their winning streak to 13 and finished undefeated against Nassau Class A opponents this season.

“This is a great feeling,” coach George Holub said. “For many of these players this is their second county championship since they’ve been in the program and it’s nice to send them off with that as seniors.”

Elmont’s stout man-to-man defense that ignited continuous opportunities in transition provided the Spartans with a lead as large as 22 when guard Jevon Santos converted a layup with 1:03 remaining in the third quarter to go ahead 44-22.

Though the Spartans led 46-28 entering the fourth, the Cyclones fought their way back thanks to timely shooting from beyond the arc and at the free-throw line. A long-distance shot from Quinn Shannon (14 points) cut the deficit to 57-51 with 51 seconds remaining.

With South Side creeping closer and the momentum quickly swinging, Holub said the message he gave his team referenced the basics.

“Take care of the basketball and make free throws,” he said. “That’s about it.”

After missing a pair of free throws following Shannon’s three, the Spartans forced the Cyclones to travel in the backcourt and went 3-for-4 from the line down the stretch to seal the victory. Eamon McGowan led the way for South Side (19-4) with 15 points.

“I really have to tip my hat to South Side,” Holub said. “They never gave up. They were constantly battling us and [coach Jerry D’Angelo] does a great job.”

Elmont came out firing all on cylinders in the early going. A layup from Louis with 4:17 to go in the first quarter gave the Spartans a 15-0 lead. Louis later drained a three-pointer with 24 seconds left in the period to extend the lead to 25-6. Entering halftime, Elmont maintained its 19-point advantage at 32-13.

“I feel like we needed that,” Louis said. “We definitely needed that lead. Once we start the game with that energy we get the lead and it’s big.”

“That was super,” said Jonathan Maldonado, who chipped in 12 points. “The defense came out strong, the offense executed and we did what we had to do.”

Maldonado and the Spartans now look ahead to their showdown with Amityville for a Long Island crown.