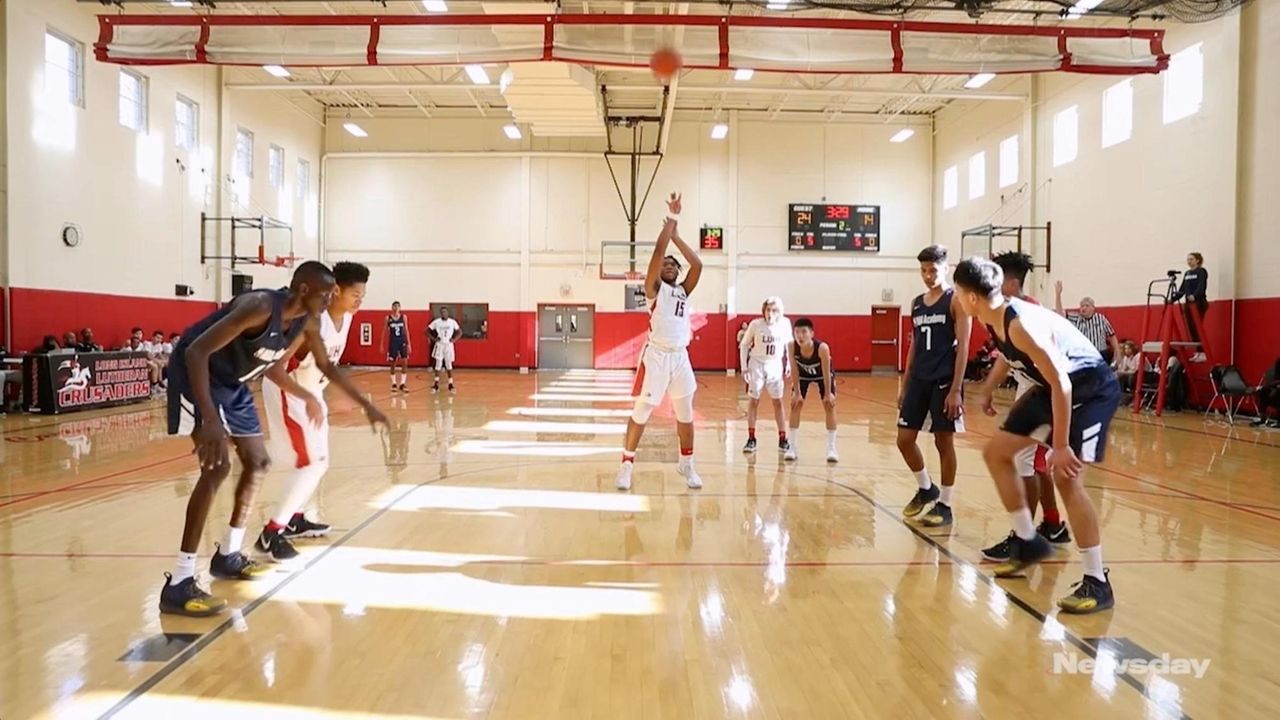 On Sunday afternoon, the Long Island Lutheran JV boys basketball team played a scrimmage against the NBA Academy Select Team, a group made up of some of the top international high-school aged prospects in the world.  Credit: Michael Owens

Jelani Johnson stepped into the circle, tilted his head up and laughed. He couldn’t help it.

The Long Island Lutheran sophomore thought as if he was staring at a giant on Sunday afternoon, getting ready for tipoff between the Crusaders' JV boys basketball team and the NBA Academy Select Team, a group made up of some of the top international high-school aged prospects in the world.

Johnson didn’t win the tip, but even after the final buzzer sounded and the scrimmage was over, he couldn’t stop laughing. He’d had the time of his life, taking on some of the best in the world, an opportunity he and teammates said they’d remember for the rest of their lives.

“I tried to jump my hardest and go get the ball, but it was crazy,” Johnson said. “I was nervous, then as we came in, we were hyping ourselves up and got ready for the challenge.”

The scrimmage, part of a week-long schedule of events for the Academy team, was organized by LuHi varsity assistant Jay David. He previously had worked with the NBA Academies, and after learning they were looking for a team to play while in the New York City area, immediately suggested Lutheran.

“When we found out, we were ecstatic,” JV coach Stu Coleman said. “There was a little bit of shock, but as the game progressed, they realized everybody is just here to play basketball.”

Although there were referees, the scrimmage wasn’t quite as stringent as a normal game. Fouls were called, but not kept, all free throws were shot as one-and-ones, and the teams played five, 8-minute periods instead of the usual four quarters.

It was a chance to try new things, to experiment with different looks and different players, and for the Crusaders, an opportunity to test themselves against some of the best currently playing the game at their level.

“It was exciting to play,” sophomore forward Karl Odrick said. “As the game went on, we got into our rhythm and started moving.”

LuHi shook off the early-game jitters, but there were, of course, some glaring differences between the teams. The Academy roster doesn’t have a single player shorter than 6 feet, with three measuring 6-9. Crusaders freshman guard Dylan Goodman noted that the pace was far quicker than Lutheran is accustomed.

“LuHi in general plays quick, but when we got into the game we weren’t expecting anything like that,” he said. “They were running up and down and dunking.”

The Crusaders didn’t slam any dunks, but the squad was proud of their effort. Coleman said he felt his team got more confident as the scrimmage went on, draining a handful of big-time threes and grabbing their fair share of offensive rebounds.

There weren’t any stats kept, for either team, but as far as Coleman was concerned, his players grew on the court and, really, that’s all he could ask for.

“We won’t play too many teams that have that level of size or skill,” he said. “So, we’re definitely going to be able to build on this.”

Lutheran didn’t technically walk off the court with a win, but the Crusaders thought they rose to the challenge, and most importantly, widened their horizons to what basketball has to offer around the world. For LuHi, the chance to be part of that is something to relish.

“This is an incredible memory,” Odrick said. “As we get older, we’ll never forget this.”