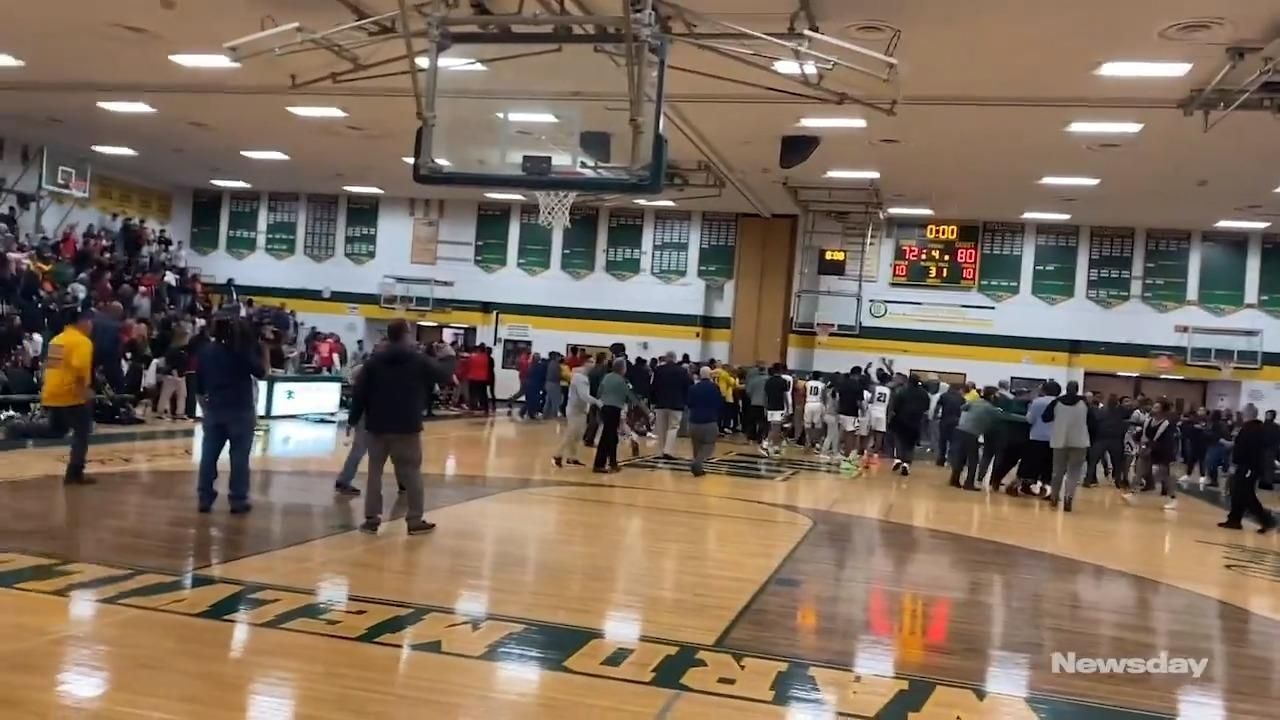 Watch the aftermath of a post-game incident from the Amityville-Brentwood boys basketball game on March 5, 2020. Credit: Newsday / Gregg Sarra

Tom Combs, the executive director of Suffolk County's governing body of interscholastic athletics, said there will be no suspensions following an incident at the end of the Amityville-Brentwood boys basketball game Thursday night.

“We had an unfortunate end to a great basketball game where emotions were very high,” Combs said. “It was a brief incident that was handled very quickly by our security. We’ve reviewed the video of the incident and determined that our security reacted swiftly and defused the situation. We’ve spoken with the athletic directors of both schools and asked them to handle it within their own districts. There is a teachable moment here where some people could have done a better job. There are no suspensions from the sectional office.”

Words were exchanged between the benches as the Brentwood coaches took exception to the last-second dunk attempt.

As the teams lined up for the postgame handshake, there was pushing and shoving between the two teams.

Brentwood assistant coach Steve Rochester, in trying to control one of his players, was thrown down on the court during the incident. As the situation escalated, some fans came onto the floor.

“In our review we found that most of the Brentwood people that went on to the court were acting as peacemakers,” Combs said. “But the last thing we want is more bodies on the court that don’t belong there, that’s why we have our own security. The police presence moved from outside in the parking lot to the gym and at that point everything had been resolved.”

Brentwood athletic director Kevin O’Reilly also fell to the floor in an attempt to separate players. O'Reilly said that neither he nor Rochester were injured.

“I'm meeting with my players and staff after school to discuss sportsmanship and winning and losing with grace,” O’Reilly said. “I’m not going to suspend any of our players or coaches as there were no punches thrown. But it is important for all of them to understand and realize how a situation like that can turn into something far more serious. And that could have hurt the team down the road in future games.”

Amityville’s director of athletics Evan Farkas was unavailable for comment.

According to John Dee, the coordinator of supervision and admissions for all Section VIII and Section XI events, the Suffolk County police were already on the scene handling crowd control in and out of the facility and any parking issues.

“We always have Suffolk PD on hand for the large crowds at big events,” Dee said. “They came into the building after security had the melee under control and order restored.”