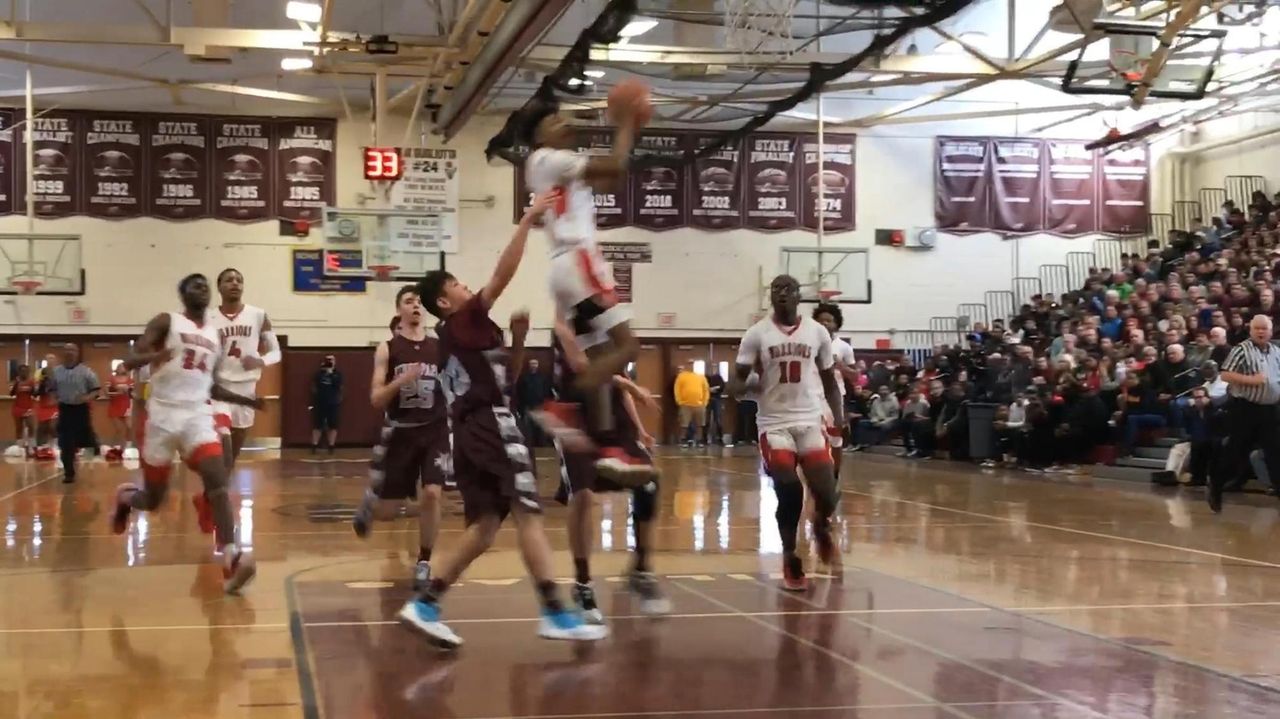 Video highlights of No. 1 Amityville's 73-63 victory over No. 2 Kings Park in the Suffolk Class A boys basketball final at Whitman High School on Saturday Feb. 22. Credit: Newsday / Michael Ruiz

With a furious comeback mounting, the opposing crowd in a frenzy and the ball rolling in his direction, Darnell Evans didn’t think twice.

Amityville was in need of a momentum-swinging shot with only a minute and a half remaining and a county championship hanging in the balance, so Evans picked up the loose ball, immediately let a contested three-pointer fly from the left corner and found the bottom of the net to extend the lead back to nine.

“They say big-time players make big-time plays,” said Evans, who scored 12 of his game-high 28 points in the fourth quarter as No. 1 Amityville defeated No. 2 Kings Park, 73-63, in the Suffolk Class A boys basketball final at Whitman High School on Saturday afternoon. “So that was a big-time play. They got hot and hit a lot of threes … It went in and the crowd went crazy. We live for times like this.”

Following the crucial shot from Evans, the Kingsmen responded with a corner three of their own on the other end to cut the deficit to 66-60, but Amityville answered right back with a 6-0 run capped off by a pair of free throws from senior wingman Divaahd Lucas with 44.7 seconds remaining to seal the program’s second county title over the last three seasons.

Lucas had 16 points, 10 rebounds, five assists and five steals and was the primary defender most of the game against junior guard Jack Garside, who finished with 16 points after entering the game averaging 21.5.

“Divaahd played a heck of a game and I challenged him,” Amityville coach Gordon Thomas said. “I told him that I wanted him to play Garside, he’s good. But he played excellent defense.”

After junior forward Myles Goddard, who had 16 points and 11 rebounds, converted a pair of free throws with five seconds remaining in the first half, Amityville stole the ensuing inbounds pass and Lucas promptly nailed a three-pointer at the buzzer to give the Warriors their biggest lead of the day at 40-19 entering halftime.

Kings Park came surging back in the fourth, however, as a midrange jump shot from guard Nicholas Svolos cut the deficit down to two possessions at 63-57 with two minutes to go. But experience ultimately helped the Warriors earn another county title.

“I’m used to this,” Lucas said. “Darnell and Myles are used to this. We used our leadership and took our teammates under our wing when we had to get it done.”